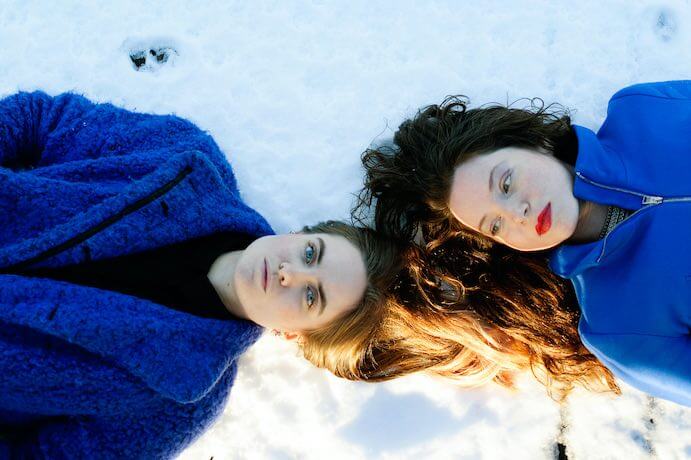 If you cope with anxiety, you may be familiar with the 3-3-3 rule: name three things you see, identify three sounds you hear, and move three parts of your body. The goal is to take you out of your head and bring you back to the present moment — though your mileage may vary. Kyaness, the debut album of Norwegian cellist Oda Dyrnes and Greek pianist Zoe Efstathiou on Alkekung Records, is similarly grounding. The six tracks on this 31-minute album are so chock full of deliciously tactile and ASMR-tingle-inducing sounds, you would be hard-pressed to not be fully engaged in the present moment of listening.

The cover art of Kyaness (by Nori Webb) is a close-up shot of beach sand: a special blend of neon pink, red, and white particles of glass, shell, stone, and microplastics. This image parallels the album’s focus on the smaller sounds the piano and cello have to offer, namely the squeaks, wisps, and other ephemeral trappings of certain extended techniques that can only be captured by artful mic setups in a silent studio.

Dyrnes and Efstathiou explore a wide variety of sound palettes, yet remain cohesive in their vision of the work as a whole. In some tracks, the performers blend with such similar timbres, it is difficult to tell exactly where the sounds are coming from. Even as a pianist who is no stranger to extended techniques and prepared piano, I was mystified by many of the sounds Efstathiou summoned from the piano — I was delighted and constantly surprised. She is without a doubt a stand-out player who has cultivated a truly personal and inimitable language of prepared piano techniques. There is great variety in the tracks of Kyaness. Track lengths vary from just over 90 seconds to nearly 11 minutes, and this mix of short, interlude-like tracks and longer-form improvisations keep the album from becoming monotonous or predictable. Shorter tracks generally have more distinctive identities, while longer tracks tend to go more places, shifting not just in texture and timbre, but with sound palettes more broadly. Dyrnes and Efstathiou’s performance is intentional without losing a spirited sense of play. Tracks often follow a large-scale arc that is easy to track, all the while maintaining the feeling that anything can happen.

The first track on the album, “Fykia,” is also perhaps the most memorable. At just 92 seconds long, it explores the shadowy nuance of a single soundscape of creaking, popping sounds. The distinct crackling noise of a well-rosined cello bow slowly dragged across a string is at the heart of this track, but a surprising depth is conveyed through its exploration of proximity.

In “Earth,” airy, chalky harmonic pulses on the instruments drive forward and gradually arrive at a confluence. On the way there, a constant sawing sound moves through waves of intensity. At their peaks, noise gives way to pitched sound, which fizzles out as the waves recede. One of the longer tracks, “Creature,” begins with sparse gargles and sputters of sound. As the piece develops, shimmering drones form and transform at a glacial rate.

In a discipline where value is widely (read: disproportionally) placed on fully-notated works, this album of self-proclaimed “textural improvisation interplay” is refreshing. Dyrnes and Efstathiou bewitch with their deliberate, intimate vision of extended technique improvisation. As one might pick up a handful of sand and contemplate the histories of each tiny particle, Kyaness reminds us to do the same with sound by asking: “What happens if we listen closer? And closer still? What do we hear when we go inside these sounds? What do we find there?” I sincerely hope for further offerings from this duo, and wholeheartedly recommend Kyaness for its sensory journey.