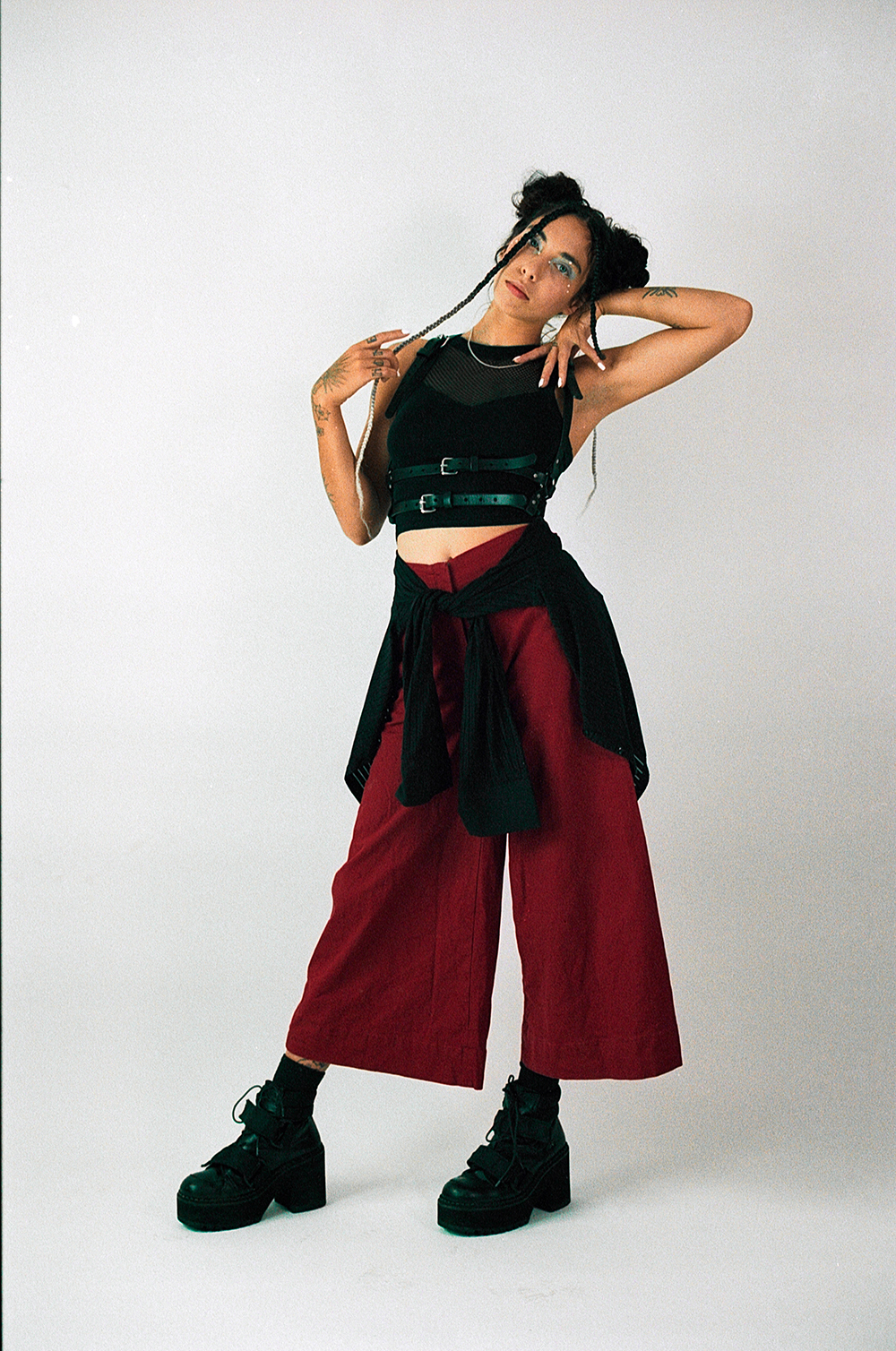 Indigo De Souza was always destined to stand out. Growing up with her mum in the reserved town of Spruce Pine in North Carolina, their free-spirited lifestyle raised eyebrows in the local community with a population of just 2000.

“My mum would pick me up from school in her truck, which was covered in naked barbie dolls, action figures and had flames painted on it,” she says. “It was just obvious the whole time that we were very different to everyone else and it never went away. I was embarrassed for a long time, I didn’t think it was cool.”

The isolated upbringing around postcard perfect scenery – mountain ranges and sparkling waterfalls – did come with a few perks though. “Being alienated along with just having myself and my imagination is why I wrote so many songs and got so much practice,” she tells NME over Zoom from her living room in Asheville, a larger city an hour’s drive away that she’s called home since the age of sixteen.

“Once I moved my idea of music broadened and I came to understand that there was a lot of underground music. Once I had those influences my writing became way more solid and just more free.” She says the town itself felt more liberating: “There was a totally different energy, the community was much more diverse and people celebrated being different. I entered a new era of my life that was a lot easier and I felt a lot more at home. Other people’s parents had crazy cars too, it was normal.”

Throughout our call, all roads eventually led back to her mother’s unmistakable presence. She did, after all, title her debut album ‘I Love My Mom’, a raw and pure collection of living room grunge-pop that was thrown out into the world with little expectation in 2018. The trippy artwork, featuring skeletons surrounded by cosmic greenery, was also painted by her mother: “She’s an incredible artist in so many ways, she’s constantly making things and nobody ever sees them which sometimes frustrates me because she has hundreds of paintings that are amazing. I think that’s why I wanted to use her artwork.”

Indigo also owes her musical discovery to her mum. From buying her a record player – on which she played her first LPs, including Elliott Smith and Frank Sinatra – through to getting her a guitar and four-track tape recorder. “I started writing songs as soon as I could play anything.” True to her hipping upbringing, she says, the songs “were usually about the environment, global warming and our town. I started performing for people around the town when I was eleven and I remember being really scared but my mum would push me to work my way out of my shyness.”

It’s no coincidence then, that the themes on her second full-length ‘Any Shape You Take’ (our August 27) are once again incredibly transparent. Tracks like ‘Kill Me’ leave nothing to the imagination as she gleefully sings about relationship turmoil: “Fuck me ‘till my brains start dripping down / to the second floor in our home.” It’s safe to say the album covers as much ground emotionally as it does musically, something which the title alludes to.

“I get really excited about using all different types of tones, mostly because that’s how my brain feels. It’s not one dimensional, there are lots of ups and downs so I think I just try to reflect that in music.” A lot of the songs were penned during the period of her debut album but revealed a new meaning through a particularly rocky time.

“I didn’t know what it would be until we were in the thick of it. Then it all made sense, the way we built the songs felt very in line with my life up until that point,” she says. “I was in a bad place when we were recording but also a really good place at the same time. I was very isolated but I was finding a lot of self-love and also manifesting really great relationships. I was learning what kind of love I wanted to accept into my life, I realised I was going to have a boundary to anything that would cause me unnecessary pain and that I don’t have to put up with bullshit.”

The album was not only transformative in her career but also her life. “After we made the record things got so much better for me. I was watching footage from when I was recording the album the other day and I was just marvelling over how different the person singing those songs looked from how I feel now.”

Throughout, there’s a pent-up angst which often erupts by way of fuzzy guitars which strike hard against her inner pop sensibilities. Perhaps the most notable moment of release comes with ‘Real Pain’, where De Souza assembles a collage of fan submitted screams for a visceral moment of noise. In spite of her spiritual being, the social media call out worked a charm. “It was a great way to connect with people directly and honestly, social media feels really life-giving for me because I use it honestly”.

Songs like ‘Pretty Pictures’ offer up healing qualities through turbulent times, putting a positive spin on the often toxic period of a breakup. “I wanted people to feel the love that’s in a break-up that comes from the fact that you’re so connected to a person and you shouldn’t just turn your back on them because they’re evolving out of your life. It’s about loving people through all of the shapes that they take.” It’s something she’d like people to get from the album as a whole: “I want people to walk away with a feeling of the freedom to love people without bounds.”

In spite of these more heartwarming elements, there are much darker themes at play, and they’re not exactly hard to find – a glance at some of the track titles indicate there’s an existential dread going on – perhaps most glaringly ‘Darker Than Death’. “That’s just how my brain is. I’m existentially spooked all the time. It’s one of my coping mechanisms, using art to express that as well as I can in a humorous way sometimes. I know that not everyone connects to that but when it’s musical it’s easier for people to connect with rather than just spiritual.”

With so much emotional depth to this record, it’s understandable De Souza is as nervous as she is excited to see it on the shelves. “It’s so weird to make something so specific to your life and then to put it out there. It feels good to share my inner world because it allows other people to process their own things by hearing what I’m going through.”

“It feels special, it feels like a way to connect with people and see people without really knowing them. I love going out and playing those songs live once people know them and getting to physically feel how people react to them, I love it more than anything.”