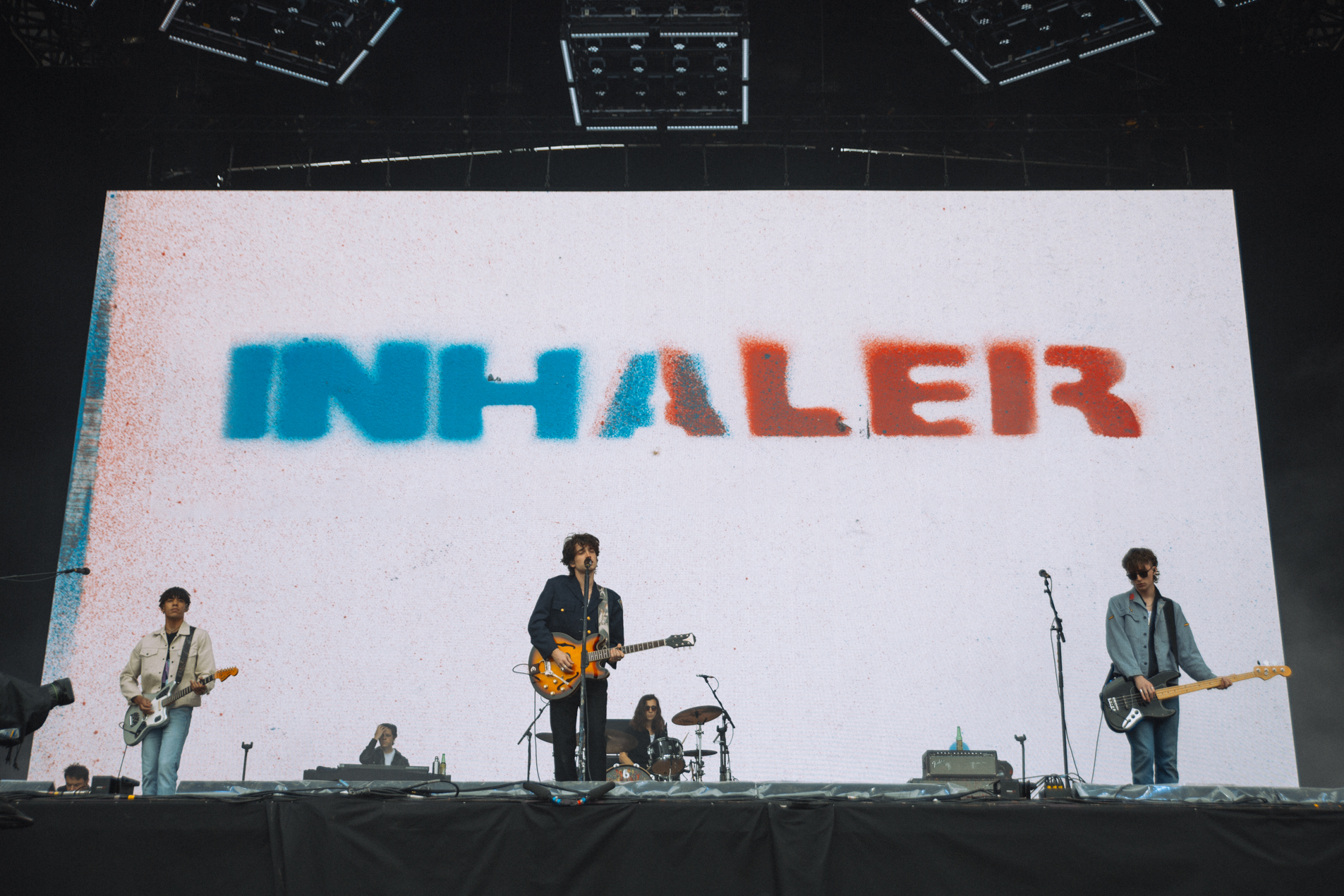 Inhaler’s Elijah Hewson wants a vibe check. “How are we doing?” he asks the early revellers at Main Stage East, smirking at the raucous response of a belting cheer that greets their opening song, title-track from their acclaimed debut ‘It Won’t Always Be Like This’

Those words, in fact, have proven a fitting mantra over the last 18 months for the sea of immaculately-dressed teens gathered here today, having been robbed of good times and ways to escape. “[The album title] took on this whole new meaning in lockdown, the feeling of trying to be hopeful and get through it all,” he told NME about the album title: “It’s six words to hang on to.”

As the first band that most would have caught at Reading Festival 2021, Inhaler are set on giving them a memory to cling on for as long as they can. It feels brilliant, thanks for asking, Elijah.

A slither of the crowd’s curiosity may come from the fact that Hewson is the son of none other than the fella in the shades off of that band U2 – but it’s merely a neat fact rather than a defining feature. And though he has a touch of Bono around the eyes – and the soaring ‘October’ purity of his voice – the frontman and the band come off in many ways as a collage of rock’n’roll greatness: the Elvis-themed guitar strap; a mod-mash-up of military blazers; Hewson’s Jeff Buckley-esque looks; guitarist Josh Jenkinson’s spritely Johnny Marr-inspired fingerplay.

They’ve clearly studied hard at the altar of indie. ‘We Have To Move On’ drenches early Killers synths over Strokes-y arena urgency and a spot of The Smiths’ melancholic atmosphere, the choppy post-punk of ‘When’s It Gonna Break’ lifts ‘00s indie out of the landfill. ‘Who’s Your Money On (Plastic House)’ has a Two Door Cinema Club bounce and Temper Trap‘s aural sunshine, while closer ‘My Honest Face’ erupts with fist-pumping ‘Sex On Fire’ dancefloor magnetism.

As things wind down with the weekend’s first circle pit, Inhaler smile and wave back, humbled at having just joined the ranks of the Reading rock heroes they’ve cherry-picked from. It doesn’t feel like a pastiche, though. It’s like a warm hug from a pal leading you back into the indie disco after existential crisis in the smoking area, or, y’know, everything going on right now.

Despite the resemblance, Hewlett thankfully lacks his dad’s stadium showboatery. He and the band reflect the vertical cool and playlist indie love of the crowd who clearly adore them. They’ll grow into a vibe of their own in time, but for now you couldn’t ask for much more. We’ve all had a rough ride of late, but it won’t always be like this. Inhaler have welcomed us back to Reading and back to better times.

Check back at NME all weekend for more reviews, news, interviews, photos and more from Reading & Leeds 2021.