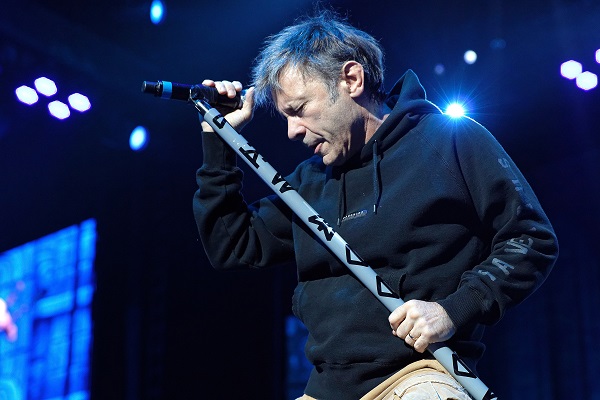 Iron Maiden’s Bruce Dickinson says he injured his leg so badly back in 2019, that he couldn’t walk properly during the band’s recent American and South American tours

Iron Maiden frontman Bruce Dickinson has done so much over the course of his career that there are very few “firsts” left. That said, he experienced a “first” while recording Iron Maiden’s upcoming album, “Senjutsu,” as his leg was strapped up following surgery.

Dickinson tore his Achilles tendon back in 2019, but he didn’t take time off from recording “Senjutsu” due to the injury. Instead, he recorded while his foot was strapped up, proving he’s truly, well, a trooper.

“I did the last couple of tracks of recording on crutches, in a boot – one of those big boots you have to wear to immobilize your leg,” Dickinson said in an interview with Kerrang! ?“I bust it at the end of April. Thirty-six hours later I was on the slab having it stitched back together. And then 24 hours after the operation, I was in the studio, singing, with my leg the size of a f***ing balloon.”

He noted that he was in a boot for a month. “I took it off, and then I had another two weeks of rehab. Then I had four months to try to learn to walk again before the tour,” he continued. “That tour of America and South America, all those big shows, I couldn’t walk properly, so I just faked it. Nobody figured it out. I was running around, but I was running around differently. I learned to move without using my calf muscles, which is difficult, but I couldn’t do it anything conventional. So I couldn’t jump and I couldn’t run, and walking quickly was an issue. But if you walked like a crab, it was all right!”

As for the new music, Dickinson said Maiden didn’t have a strong vision for the album, which will mark the band’s follow-up to 2016’s “The Book of Souls.”

“We had no clue, absolutely no idea, what the album was,” he added. “We had a few ideas. We went into the studio and tried them out, and when they worked, we just recorded straightaway. So while we were rehearsing, everything was being recorded – the tape was rolling the whole time.”

“Senjutsu” will hit stores on on Sept. 3. Listen to the debut single from the album, “Writing on the Wall,” here.