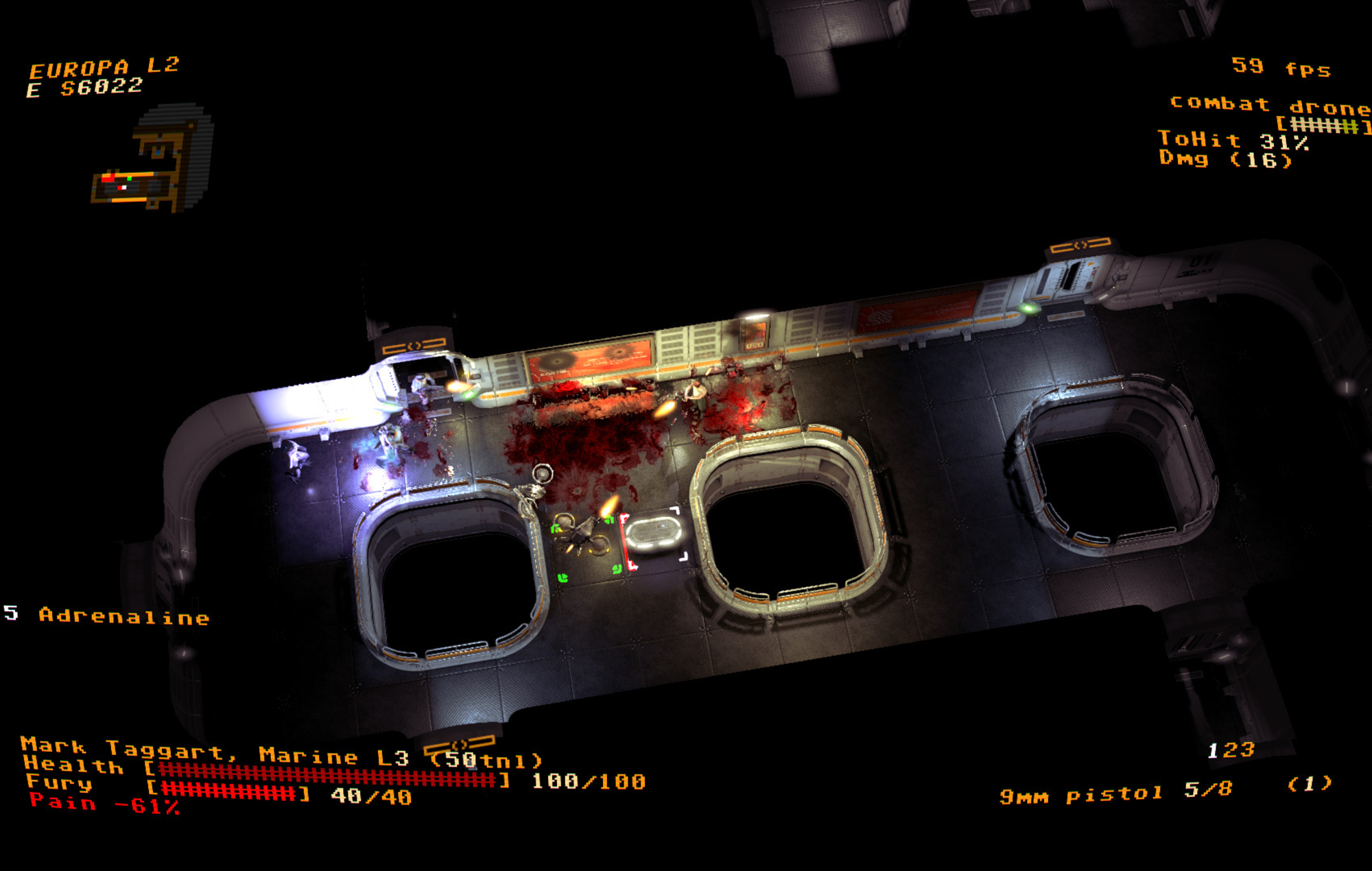 Feeling invincible in Jupiter Hell is a difficult, irresistible indulgence. Despite facing an endless horde of demons – and knowing better – it’s hard not to feel like an immortal demon slayer, especially when one barking shotgun blast turns would-be murderers to gloopy pink space slush.

Unfortunately, once you’re swept up in the intoxicating rhythm of heavy metal slaughter, it’s hard to snap out of the frenzy – and that’s very bad for your survival rate.

These moments, high on a demon-slaying god complex, come crashing down quickly and you’ll realise that you unknowingly committed yourself to an early grave five turns ago. That’s because despite the roaring guns and fast-paced firefights, Jupiter Hell is still a turn-based roguelike, and one mistake will send you careening straight back to the menu.

And then you’ll play again.

That’s the thing – despite this being the fastest-paced turn based game I’ve ever played, it’s still a turn based strategy. You need to quell the bloodlust and think about your moves. Do you run for cover, or fire a shot at the combat drone and remain exposed? Retreat under fire, or stand and stay fighting? It’s a very cerebral process, and the result is a game that manages to flow between turns smoothly – which is why it’s so easy to slip up and play for the kill.

Firing your gun – and other actions like moving, reloading and using items – uses up your turn and allows others to make their move. This means that Jupiter Hell lets you examine every single choice you make in a way few games in the genre offer. The strategic roguelike is quite similar to Into The Breach in the sense that you’ll want to give thought to every action before committing to them, however Jupiter Hell is much faster paced and lacks any way to rewind your rampage.

Speaking of rampaging, Jupiter Hell hands you all the tools to do so gleefully. Every weapon is powerfully satisfying to use, and each delivers gore in its own special way. Shotguns will annihilate entire crowds of close-up enemies, while pistols whittle down individual baddies and are fairly versatile for long and short ranges. Further in, there are plenty of weapons (including classics like the chain gun) to snatch up and fire at will.

That’s not to say that the enemies – from reanimated soldiers to fireball-spewing demons and combat drones – don’t have powerful weapons of their own. They’ll hit hard, and scarce healing supplies mean that one bad fight can keep you on the back foot for the rest of your run.

The zones across Jupiter Hell are all engaging, with set designs taken straight from the sci-fi classics handbook. While Doom fans will be most familiar with maps of fire and bubbling lava, plenty of levels reminisce the eerie, sterile station halls of Alien. Even better, Jupiter Hell typically makes sure to reward the player for exploring each level, with life-saving goodies like upgraded weapons, health packs and armour dotted across each floor.

Randomized events also do their part in sprucing up levels and making for standout stories. At the end of my last run, I was ominously warned that ‘the hunt’ would begin soon. I didn’t last long after that countdown hit zero, and I never did see the end of the ensuing horde that followed, but there wasn’t a spot of chrome visible underneath the gore by the time that I died.

Like any good roguelike, Jupiter Hell manages to juggle keeping every run rewarding and engaging, while not making your death off-putting enough to resist the calling of ‘new game’. There’s a lot of replayability to be had, too. As well as the random nature of each playthrough, there are three different classes – all specialised in different areas – and each offer a different lens to play the game through.

On the other hand, Jupiter Hell still doesn’t offer as much build diversity as other roguelikes – you might find a gun with better stats than your own, and there are different perks to take upon levelling up, but there’s not too many options to build re-actively to the loot you find.

The one constant in Jupiter Hell, when every run promises a different adventure, is the protagonist. The foul-mouthed marine, soaked in gore and rightfully pissed, is a walking-shooting bag of oorah-mentality; come to life and shot into space.

It feels like some games (ahem, Duke Nukem Forever) casts too wide a net when they try to recreate an overly-macho, bygone action hero – even satirically – and dredge in all the poorer tropes (rampant misogyny, punch-down humour) that are better left in the past. By leaving the shittier aspects behind and getting the rest right, Jupiter Hell‘s angry ball of expletives brings the game to life in a way that no silent protagonist could.

It would be foolish not to mention that behind every demon murderer is a wall of angry, relentless heavy metal. The music soundtracks every gratifying gunshot and crescendos when combat really gets going, resulting in excitement that delivers in-the-moment adrenaline – which slower-burn turn based games don’t usually go for.

The resulting soundtrack is a hellish engine that drives the game implacably forward. It’s a perfect companion to your ripping and tearing effort, and it shows that the team at ChaosForge understand pummelling loud guitar riffs are as much a part of the Doom experience as the wholesale demon slaughter.

One issue for me was that while I understood the stylized interface – which is reminisce of an old computer terminal – I did find it a little tough to read at points, and some information wasn’t always readily available at first glance. It could also do with a hotbar feature for using inventory items like medkits and grenades, as it’s jarring to have to dive into a menu screen at crucial moments.

Jupiter Hell is out now on Steam.

It says a lot that Jupiter Hell – a turn-based roguelike where mistakes end your entire run – can whisk your cautious sensibilities into an unadulterated blood frenzy at the drop of a shell. The game is a must-have for strategy fans and curious Doom fans alike – the unique pacing brings something new to the turn-based genre, while demon-slaying hobbyists will find that Jupiter Hell scratches the same itch for satanic butchering as all the greats. There’s some work to be done on stability – and more variance in builds wouldn’t go amiss – but Jupiter Hell is an incredible, hell-bound slaughter as it stands.