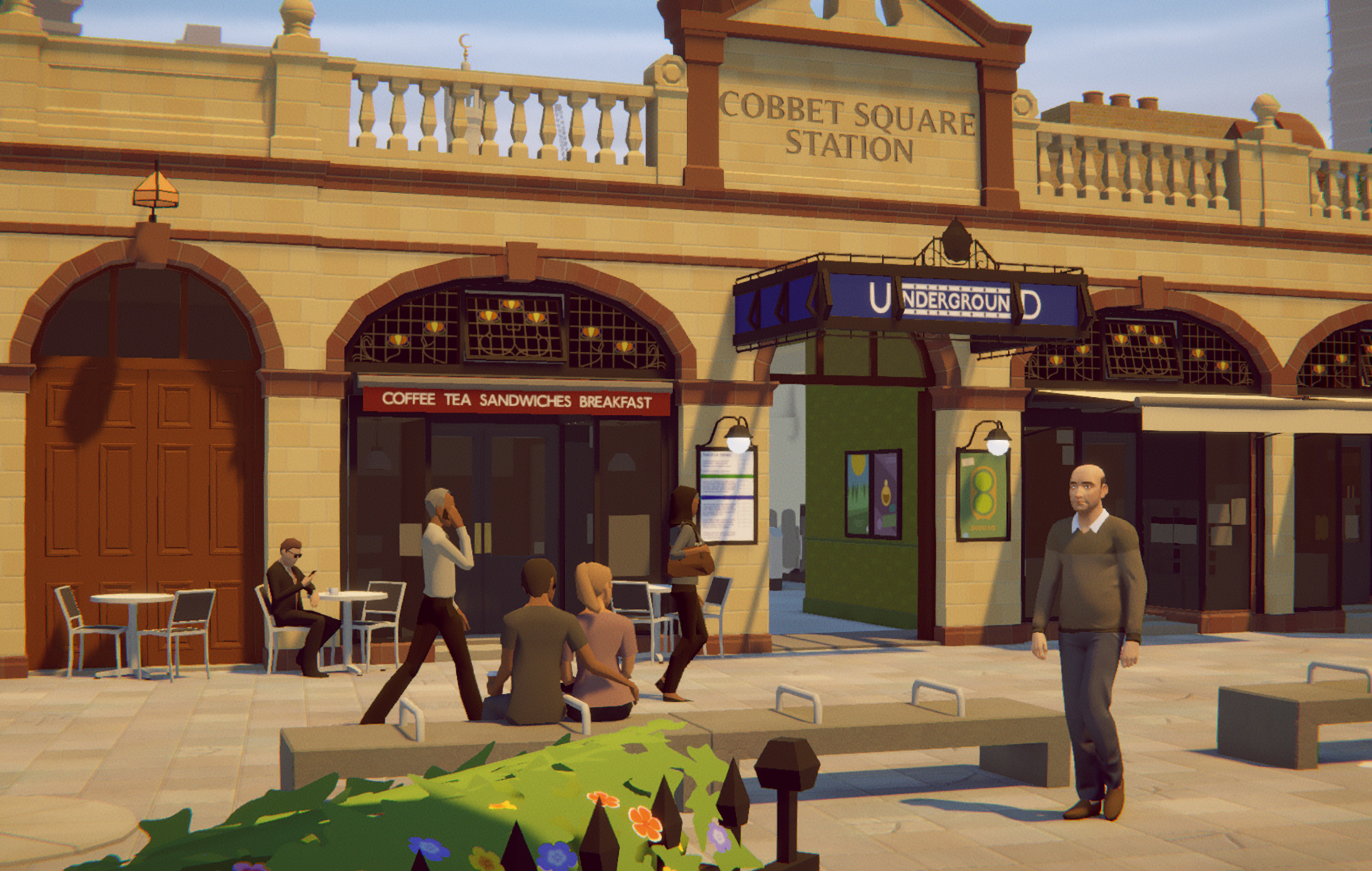 We often read about video games as a form of virtual tourism, a sightseeing sandbox to escape to, which can feel all the more important for those of us who are unable to travel anywhere, for obvious reasons. Of course, when it comes to telling stories grounded in the day-to-day, a setting isn’t meant to be a playground or tourist attraction but someone’s backyard or home in all its drab familiarity. It’s this attention-to-detail in the mundane that makes Last Stop so refreshing.

After a tongue-in-cheek opening shot of Big Ben, which turns out to be just from a poster on the London Underground, it’s the last time you’ll see a landmark cliché. The London of this game is less Piccadilly Circus, more Zone 2 and 3 on the Piccadilly Line, and instead of the City skyline, our exteriors are of council estate tower blocks alongside terraces and leafy suburbs.

This may be a fictional version of London – there are after all, no real tube stops called Salt Cellar Lane or Cobbett Square – but every frame of it, be it a red double-decker, a big green city park, or even the local chip shop, will feel immediately recognisable to people who live, work, and commute in the Big Smoke. That authenticity helps ground Last Stop’s three stories that gradually take a turn for the weird.

Varying in tone and cast, from comedy-drama to psychological noir, each story consists of multiple chapters in digestible lengths lasting no longer than 20 minutes with optional recaps. While you can select whichever character you want to follow first, you’ll need to experience each one in the same chapter before you unlock the next chapters for all three.

There’s John, a middle-aged, overweight single dad scraping by in the public sector who finds himself swapping bodies with his younger hipster neighbour Jack. Meanwhile, Donna is a bored high-schooler whose pursuit of teenager kicks goes from getting high on gas to meeting (and unwittingly kidnapping) a man from another reality. Meena is perhaps both the most compelling and most dislikeable character, embarking on an extra-marital affair while pursuing a promotion for a mysterious role at the shady security and intelligence organisation she works at.

Each character offers a different perspective and tone but what ties them together isn’t the supernatural sci-fi high concept so much as it is their inner lives and conflicts. The body-swapping plot is arguably Last Stop’s most familiar trope but does it in a way we haven’t seen before in very mundane British terms, as Jack despairs at being trapped in the body of a bald overweight man with heart problems while John grapples at the concept of empathy in video games.

The narrative is what you’re principally here for, where you can choose the tone rather than the direction the story goes, which is still very much an authored experience in the same way every scene employs editing techniques cutting closer to that of film and television. When it does attempt to hand control over to the player, it comes off as rather obsolete, especially if you’re just pushing up on the left stick for less than a second before it cuts to the next scene anyway, or awkward when you’ve lost sight of your character in a wide-angle establishing shot. Other attempts at gaminess however are clearly for comic effect, such as Meena’s HUD that appears when she’s scanning individuals to assess their ‘threat level’.

Visually, the character models have taken a step up from Variable State’s low-poly effort Virginia, although the animations still have the dead-eyed jankiness of the original Life Is Strange. That this is never a distracting issue is down to its solid writing. And unlike the developer’s wordless debut, Last Stop is bursting with fully-voiced dialogue, all of it absolutely spot-on. There’s no stunt-casting involved either, with most of the actors hailing from bit parts in small-screen British soaps and dramas like Coronation Street, Silent Witness, and Casualty.

Yet while the game enjoys balancing between the magic with the mundane, it’s arguably at its strongest when focused on the latter. Sure, you can see why a handsome stranger who can spirit people away to another dimension is a draw, especially for Donna and her two friends Vivek and Becky. But it’s the sexual tension between the three, or Donna’s attempts to get away from her overprotective sister (and copper) Emma that are more relatable, and more memorable as a result.

Nothing feels like bloated exposition, and across age groups – from teenagers to twenty-something or middle-aged adults – everyone just sounds natural, even if accents are mostly on the posh side, with the exception of Meena’s cantankerous lefty father and Jack, the token Northerner. There’s a real joy in hearing British insults being hurled like “pisshead” and “bellend”, while lines like “she lives in Croydon” had me laughing out loud for its specificity.

What comes just as naturally is the diverse make-up of the characters. There’s great care in how Last Stop’s cast, from the main protagonists to supporting characters, to even the faceless background models, simply and casually reflect modern-day London across different backgrounds and postcodes.

It’s only a shame that in building up the central mystery and attempting to connect the plots that worked fine as stand-alone stories in an anthology, Last Stop decides to lean so bizarrely leftfield for its final chapter. Never mind not quite sticking the landing, it blasts off and crashes into something else altogether, hackneyed plot devices be damned. The option to choose different endings also feels arbitrary, given how your choices had never mattered in that way before, not to mention it’s possible to just replay the last scene and choose the alternative ending as soon as the credits roll, anyway.

That this doesn’t completely undo all of what I enjoyed from the other chapters is a testament to Last Stop’s overall writing and direction, and its depiction of a London that’s so familiar yet rarely seen in games. Just for that alone it’s worth a binge alongside your next BBC iPlayer fix.

Last Stop is is available for PC, PS5, PS4, Xbox Series X|S, Xbox One, and Nintendo Switch. Reviewed on PC.

Some may dismiss Last Stop as a game, especially when even its limited moments of control feel obsolete, and the supernatural premise may ultimately come and go like a summer fever dream. But with three equally engaging stories set in London at its most remarkably mundane, the excellent writing and performances make this a binge-worthy experience.