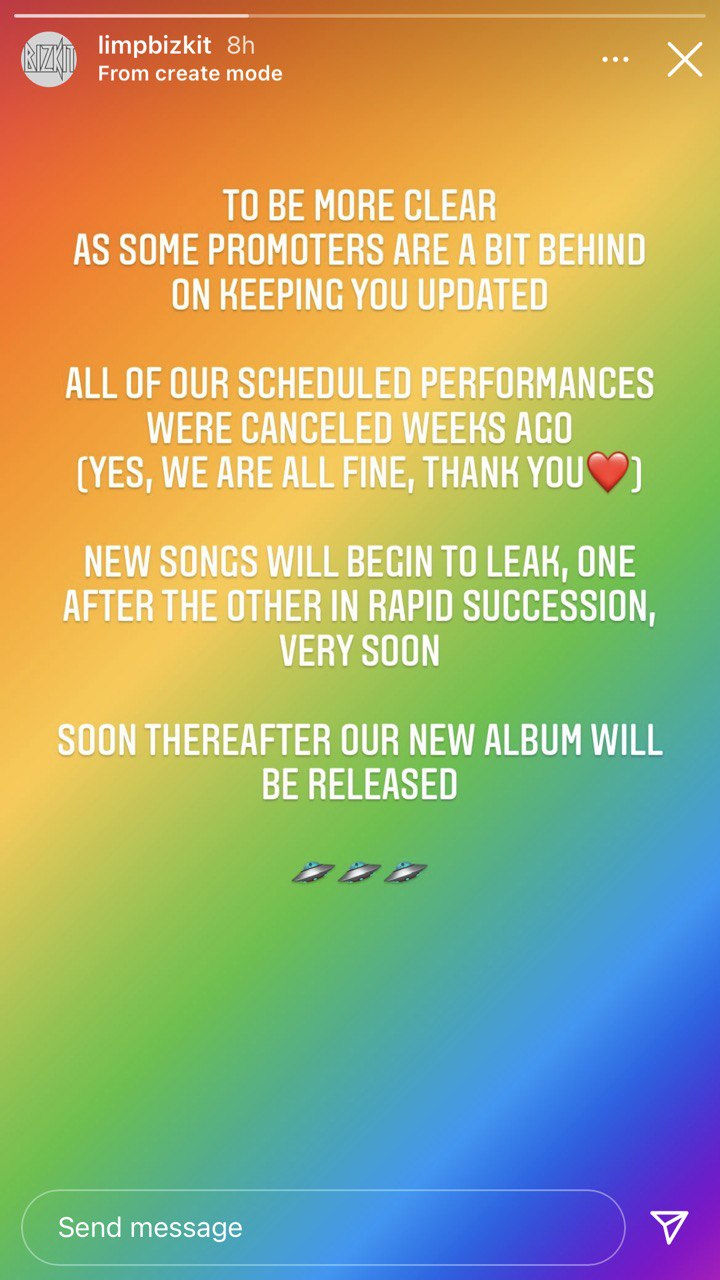 Limp Bizkit have updated fans on their next album, announcing that new songs will arrive “in rapid succession, very soon”.

In an Instagram Story post last night (August 25), the band reiterated that their previously scheduled performances have been cancelled, assuring fans that they are “all fine”. Earlier this month, they pulled the plug on the remainder of their US tour out of concerns for safety.

“To be more clear as some promoters are a bit behind on keeping you updated,” they wrote, “all of our scheduled performances were canceled weeks ago (yes, we are all fine, thank you).”

Then, they stated that “new songs will begin to leak, one after the other in rapid succession, very soon”. Their new album will be released “soon thereafter”.

The band’s long-gestating follow-up to 2011’s ‘Gold Cobra’ has been known under the title of ‘Stampede of the Disco Elephants’, but it’s unclear if that is the new music Limp Bizkit are referring to in this update.

The band announced the title of the fabled album way back in 2012, and in the following years released the singles ‘Ready to Go’ and ‘Endless Slaughter’, which are all supposedly taken from the record.

The band performed a portion of ‘Thieves’, a cover of Ministry’s 1989 single that’s supposedly on the new album but not officially released. They also played a recording of new single ‘Dad Vibes’ as an outro to the set.

Limp Bizkit also previewed another new song, ‘Turn It Up, Bitch!’ at a Chicago concert days before their Lollapalooza set.

In June, guitarist Wes Borland offered an update on the album, attributing many of the delays to Durst’s dissatisfaction with his vocals. “We’ve probably, in the last 10 years, been in the studio to try and complete the record, I wanna say, seven times, to different studios,” he said on Drinks With Johnny, the podcast of Avenged Sevenfold‘s Johnny Christ.

“We probably have 35 songs recorded instrumentally, and he’s done vocals on them and then thrown the vocals away,” he continued.

Limp Bizkit’s Lollapalooza set prompted renewed interest in the band, with accelerated streaming numbers over that weekend. Durst’s new look was also popular enough that it inspired a bootleg action figure in his likeness. The toy sold for $680 (£490.70), with one of the losing bidders being Durst himself.