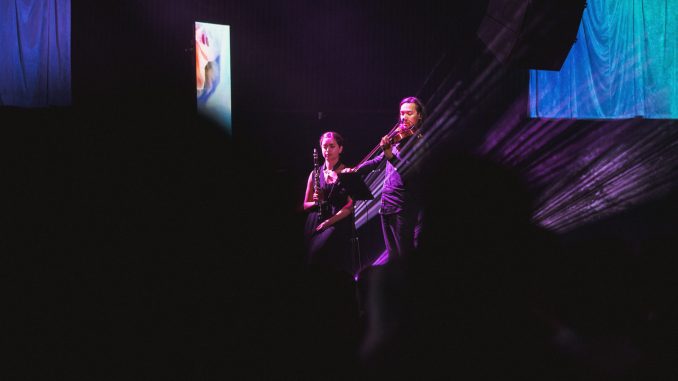 Music in the Sky
Pianist Luke Howard with The Nano Symphony
Roundhouse, 30 May

Music In the Sky’s premiere performance at the Roundhouse was an incredibly tranquil and immersive experience. The event was split into three parts that spanned the journey of a night: Sunset, Dream, and Sunrise. The audience was served a smorgasbord of musical and visual delights, featuring moving image design by esteemed creative director Robbie Klaesi and compositions from Luke Howard, Joep Beving, Debussy, Satie, and more.

The idea for the event came to creative and executive producer Keith Hong during the peak of the 2020 pandemic. During this time, he says he found solace in music and sunrise. It was from this concept that Music in the Sky was born. The sense of soothing comfort was omnipresent throughout the evening, found in everything from the seamless transitions between pieces to the position of the musicians (an inviting and collaborative semicircle centred around Howard at the piano).

The first act, Sunset, began with warm colours projected on the surrounding screens, accompanied by calm and slow-changing harmonies. It was immediately clear this was a well-rehearsed and connected ensemble with visible eye contact and smooth entries. The fact that the first act mostly consisted of placid ambient music made for a gentle introduction to the concert, however it meant the final work of Sunset (Rebecca Clarke’s Duo Pastorale) felt a little jarring, as if it belonged on a slightly different aesthetic plane.

The second act, Dream, included some canonised classics: Satie’s Gnossienne No. 3 and Gymnopédie No. 1. It opened with a particular favourite piece of mine: Max Richter’s On the Nature of Daylight, accompanied by contemporary dancers Rachelle Silsby and Liam Berg. Unfortunately, when the dancers moved off the stage to perform level with audience seating, much of their footwork was not visible to me (and I was only in the third row). I imagine the back rows would have had very little view at all. Apart from the Richter, a particular highlight of this second act was Luke Howard’s Passion/Sleep. With projections of space and the natural world, it made for a reflective and moving atmosphere.

What really struck me about the performance was how well suited the projections were to the music, both in timing and also in aesthetic and character. For instance, in the second act, we heard Debussy’s Reverie with its multiple changes of character (so often found in Debussy’s music) and the lighting reflected this very well, with sudden paint-like splashes of colour that burst across the screen.

The third act, Sunrise, was shorter and included Silsby back to dance solo. It was once again enjoyable and relaxing music by Beving and Howard, however I didn’t experience the change in musical character I was expecting. It felt a little too similar to the tone of the other two movements: if I had a blind listening to Sunrise, Dream, and Sunset I’m not sure I would have been able to distinguish them.

Overall, it was a thoughtfully curated event, and with some changes in design could be even more immersive and accessible. I look forward to seeing what Hong has planned next.