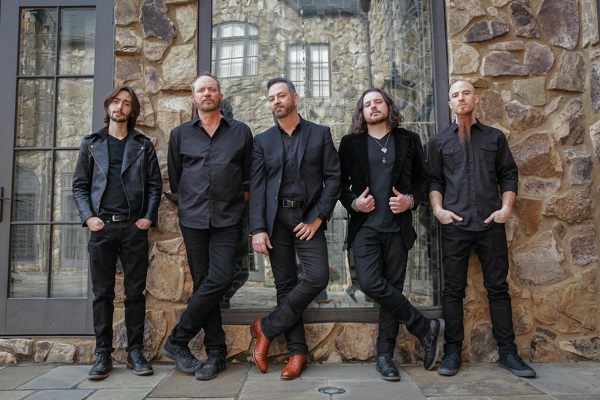 The CEO – Story by Anne Erickson, photo by Chad Lee

Mack Mullins of The CEO talks about the Georgia rock band’s new album, “Redemption,” which features Vince Hornsby of Sevendust on bass

When The CEO, a rising new rock band out of Georgia, wrapped up work on their debut album back in early 2020, they were eager to release it to the world. That all changed when things shut down due to the burgeoning pandemic, and the guys were forced to sit on the new tunes for an entire year.

On Friday (June 25), The CEO will finally release that debut album, “Redemption,” via Rat Pak Records. The set features strong songwriting, tight instrumentals and powerful lyrics and vocals from founder Mack Mullins. Mullins spoke with Audio Ink Radio about the new album, what it was like working with mega-producer Michael “Elvis” Baskette and more. Read the full interview below.

Audio Ink Radio: Congrats on your new record on the way, “Redemption.” The album features Vince Hornsby of Sevendust on bass. Explain your history with The CEO and how you joined forces with Vince of Sevendust.

Mack Mullins: You can’t live in Georgia or in the south and not be fans of Sevendust, so obviously, we are and were. It’s a big town but small community of musicians, so everyone knows everyone. I had put together a demo album and did a showcase for it, and Vince was there, and he came up after and said, “I love it. I’m going to send you down to camp Elvis and see what you guys can do.” We went down (to work with producer Michael “Elvis” Baskette) on four new songs, and after working together, Elvis called him up and said, “Hey, you need to come down here and be the bass player.” We had a blast. We wrote some cool songs together, and he was a fun and talented person.

Was this entire record recorded before the lockdown and COVID-19?

It was! We were finishing it up right when the world went crazy. Once it was done, it was a matter of the label going, “There’s not much we can do with it right now,” so they shelved it while a lot of other bands were putting out their albums. I’m excited for people to hear it, because the songs are a moment in time. You love them, like your children, and you put them out there and hope other people will love them, too. I’m excited for the feedback, too, and to find out what works and we’ll take that into consideration for album No. 2.

What was it like working with producer Michael “Elvis” Baskette? He’s known for working with so many great artists and bands, form Myles Kennedy to Alter Bridge to Sevendust.

Well, you can imagine, you go into his studio, and there are platinum records all over the wall. Slash and Myles Kennedy have been there, and Myles was there the week before we were. We’re just a bunch of farm boys from Georgia, and working with him was so cool, and he’s a talented musical genius, but he’s as grounded and nice as you could imagine. So, we were there having fun, and he would record the record and helped write, and then he’d grill steaks that evening. My favorite part of doing the record was just hanging out with him.

Listening to the album, “Dirty Tragic” really stands out. Explain how that song came together.

That was the first song we wrote down at Camp Elvis. We had a good idea for that song before we went and how it was supposed to go, and we knocked it out really quick. It was a quick and relatively easy song to write and record. It’s got a cool groove and bounce to it, and it’s a song about one of those bad relationships gone worse, and you get to the point where you’re right back to where you stared in the beginning.

What are your thoughts on the state of rock music?

I think for me, it’s experiencing a comeback. I think you always want to look to the young generation and what they’re doing and listening to, and I’m seeing more young folks gravitating to legacy rock acts like AC/DC, Van Halen and Kiss. I don’t know if it’s in vogue or a nostalgia thing, but I hope from there, they start to discover new rock and new hard rock, so I’m hopeful.