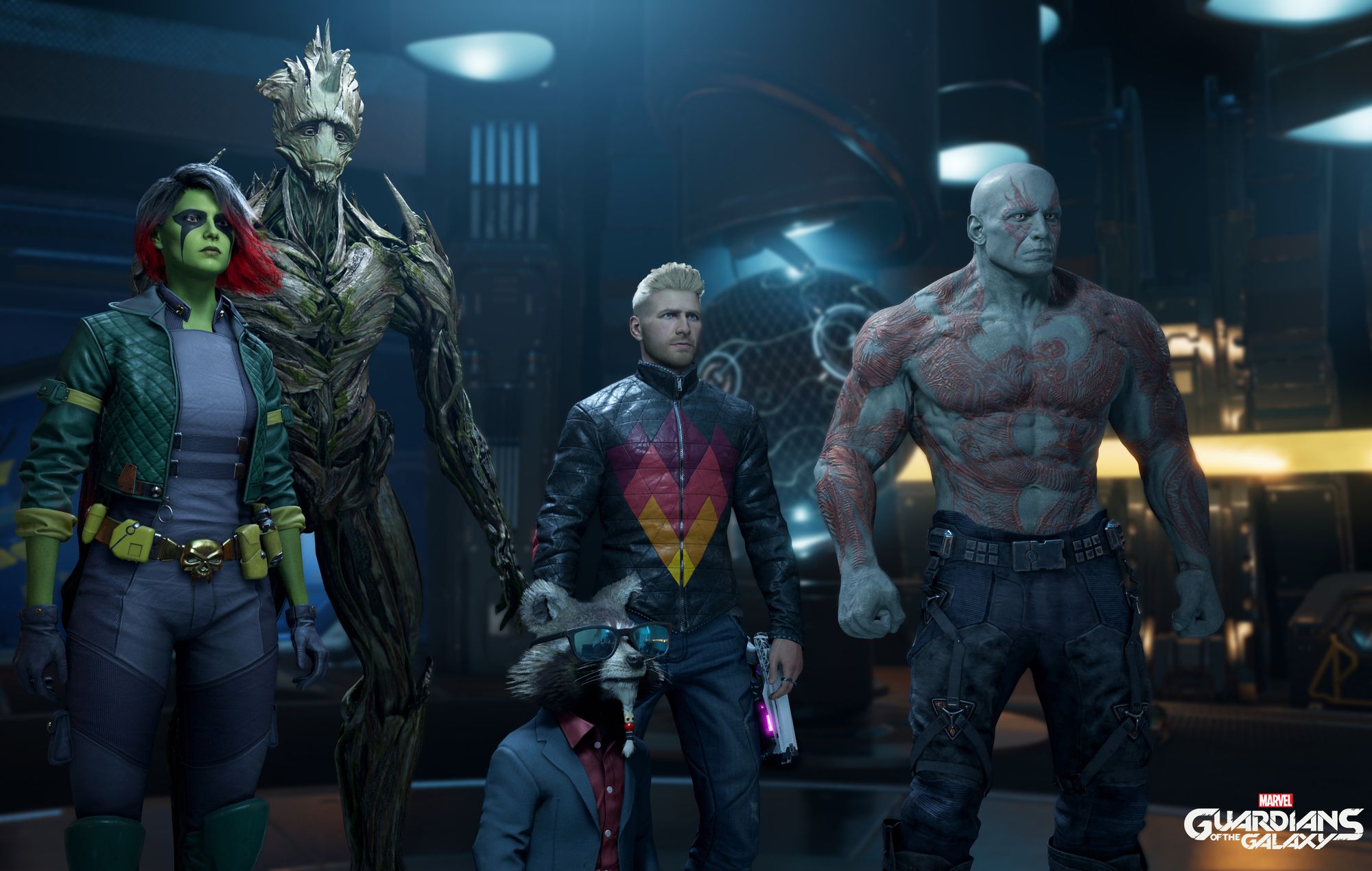 When Guardians of The Galaxy – the movie – was released in 2014, it revolutionised the cinematic world of superheroes both at Marvel and beyond. Following Christopher Nolan’s gritty take on Batman across his Dark Knight trilogy (starting in 2005 with Batman Begins), studios were desperately trying to turn comic book extravagance into something believable. Sure, the likes of Iron Man (2008), Captain America: The First Avenger (2011) and Thor (2011) were littered with quips ripped straight from the cartoon page but those heroes still took themselves very seriously.

Then Guardians of The Galaxy arrived. A fluorescent, brash team of misfits with flexible morals, James Gunn’s wacky, outrageous and heartfelt film has influenced pretty much every superhero film that followed.

So Marvel’s Guardians of the Galaxy, an action-adventure game developed by Edios-Montréal and published by Square Enix, has some very big rocket boots to fill. Based on our hands-on preview, it takes the expected but twists it with enough new to make it feel like a very different adventure to what we’ve seen before.

While Marvel’s Avengers is all about playing as your favourite hero, Guardians of The Galaxy sees you wrestling with leadership as Starlord Peter Quill although riffing entirely on the comics rather than anything seen in the films.

Following a brief tutorial presentation, my hands-on preview of the game starts at Chapter 5, which the developers refer to as “The Scooby Chapter”.

Straight away, we’re given the freedom of the Guardians’ spaceship, the Milano, which acts as a base camp between missions. Walking about the ship, you can interact with the Hollywood roster of Guardians – Rocket, Groot, Drax and Gamora – while investigating their living quarters launches a series of backstories that goes some way to explain this ‘What If?‘ style alternative reality.

Long story short, Thanos was taken down by an interplanetary resistance army and the universe is still adapting to this new world order. Later in the chapter, we’re finally introduced to the Big Bad of the game (the brainwashing Universal Church of Truth) but for now, we have to go pay the Nova Corp a fine. 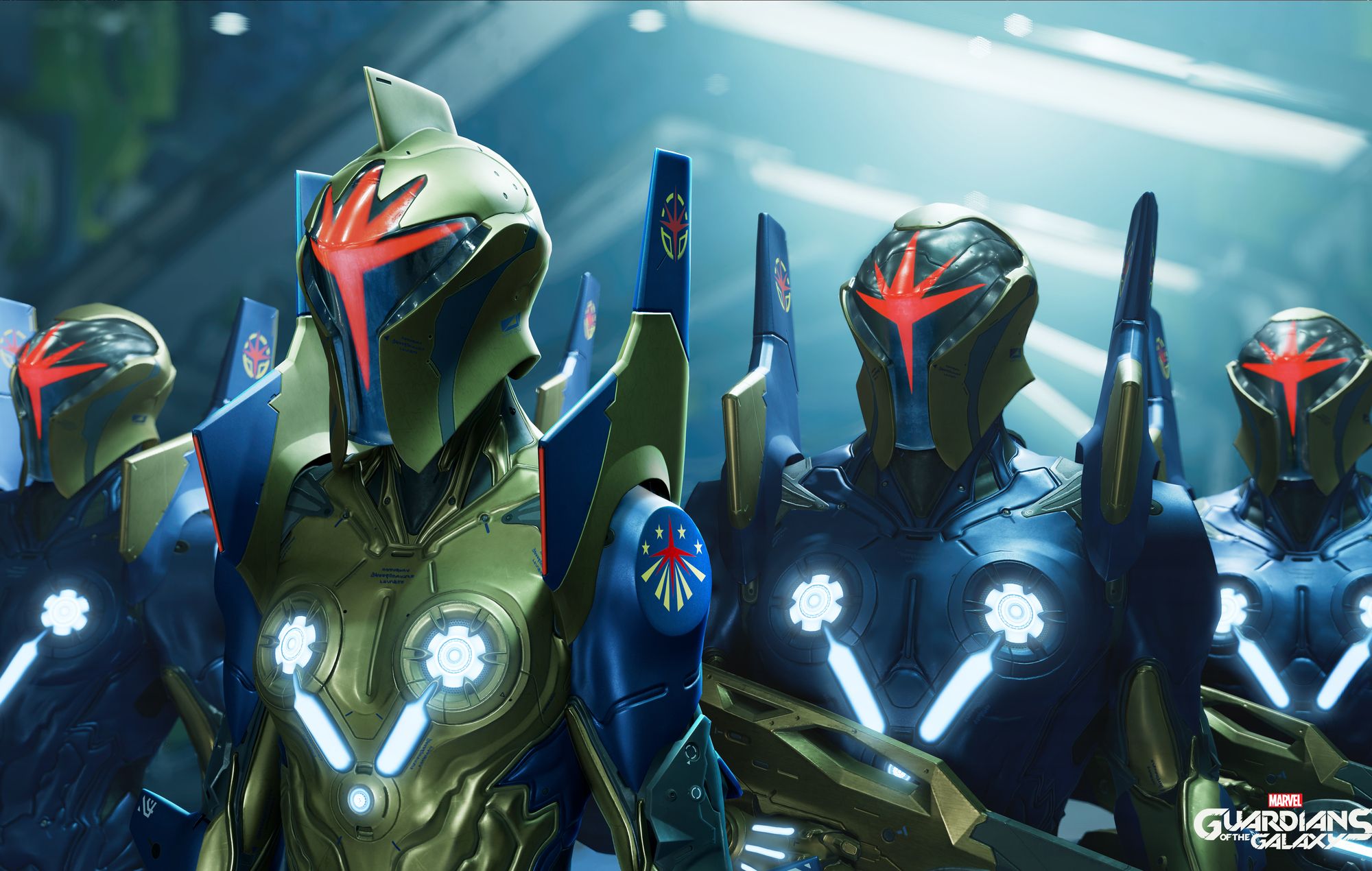 Like titles in the storytelling Telltale Games series, these conversations and the choose-your-own-adventure responses have repercussions later in the game. Ignore Rocket and he’s reluctant to crawl into air vents to help you solve puzzles and later in the level, I make Quill open his big mouth and soon regret it.

This easter-egg filled world-building is brilliant for diehard fans of the series but can also be easily avoided if you’d rather indulge in the action end of this adventure game.

Once I’ve spoken to every person on the ship (including a space Llama, for some reason that I’m sure will be explained elsewhere in the game) and tried out the crafting function (Rocket can upgrade your equipment using items found in-universe but they’re never needed to progress) we land at the deserted Nova Corp station and we’re mercilessly introduced to the battle mechanic.

In Guardians of The Galaxy, players take control of Quill for battles but you can also issue commands to the rest of the team. It’s not complex but it does take a lot of practice to get right. And since we’ve jumped straight to Chapter 5, I die. A lot. (or at least that’s what I’m telling myself).

My instant reaction to confrontation is to go charging into the battle and treating the game like a beat-em-up. In my defence, the hand-to-hand combat is a lot of fun, with Quill delivering a variety of blows and laser blasts that feel suitably weighty but I’m quickly overwhelmed and find Quill and the gang starting over from the last checkpoint. Next, I try managing the rest of the team from a distance, like a tactical RPG, but The Guardians quickly spread out and get bested. We start again.

Striking a balance between the two is your best option. With each team member bringing something new to the battle, different enemies will require a different order of attack but you’re never given much time to sit back and strategise. It’s an intense experience that takes a lot of work to get right and is never spoon-fed to you. Get to grips with this though,and it feels really satisfying.

The same can be said for the huddles. During combat, when you build up enough momentum, Quill can gather the team together for a pep talk and if done right, it supercharges every member of the team while an 80s soundtrack kicks in. I don’t think I’ve ever had as much fun in a game as dominating a corridor full of enemies while ‘Take On Me’ plays. For a handful of seconds, everything falls into place and I feel like I’m truly mastering this game.

Then I enter a room with a Grenadier and I die a load more. If I’d been better, I’d have then been thrown into a combat puzzle where I’d have to fly about and shoot clamps stopping the Milano from escaping while brainwashed Nova Corp Soldiers tried to take me down but thankfully, I ran out of time. I’m not sure I could take the sight of Star Lord dying any more.

Yes, at times Guardians of the Galaxy is incredibly frustrating but it never feels impossible. It helps that the game looks beautiful, the characters have their own personalities, and this team of misfits actually has friction between one another. I think there’s a chance the banter between the Guardians might get annoying after a while but during my two-hour playtime, the sheen never wore off.

Like the movies, the themes of chosen family, grief and reluctantly doing the right thing are threaded between the wacky adventures and I find myself really rooting for this gang. It’s just a shame they’ve got me in command but as I walk out of the Square Enix offices, I’m already counting down the days until I can return to the Milano and do right by my Guardians.

It feels like I’ve only just scratched the surface of what this game has to offer and I already want more.