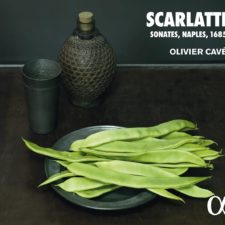 Originally published by the Aeon label, Olivier Cavé’s delightful 2008 Scarlatti sonata release reappears on Alpha, and long may it remain in the catalog. From the outset Cavé commands attention with his superb sense of rhythm, his utterly even and pinpointed articulation, and his ability to offset inner voices and secondary melodies without the least contrivance.

You hear this right away in the opening D major K. 492 sonata, where the pianist’s ever-so-slight crescendos in the ascending left-hand scales further propel the music forward. His striking shifts of color and touch when reiterating phrases in the E major K. 381 define graceful “orchestration” at the piano, while the familiar G major K. 427 features playful repartée between the hands that make Cavé’s tempo sound faster than it actually is.

K. 183 features impeccably timed trills and minute accelerations that generate understated yet palpable inner drama. I could quibble over Cavé’s pauses between phrases in the F major K. 107 sonata, but his disarming characterization wins me over.

By taking the G major K. 125 at less than the usual breakneck speed, Cavé is able to give shape to the bass lines and to let the melodic octave leaps breathe. He makes the most of K. 470’s major/minor mode contrasts, and takes K. 32’s Aria directive seriously and with vocally informed fullness. The A major K. 39 sonata is the only faster selection that finds Cavé less than scintillating, certainly when you compare his relatively soft-grained repeated notes alongside the crisper Horowitz or Tipo recordings. But that’s only one sonata out of 17, leaving 16 out-and-out winning performances that all Scarlatti piano mavens will enjoy. A fine sounding release, enthusiastically recommended.