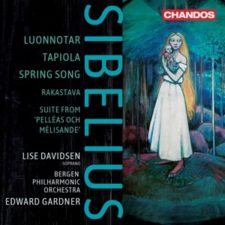 Here’s a mostly excellent disc, smartly programmed to offer an appealing mix of familiar and less-known music. Soprano Lise Davidsen seems to be all over the place these days. She’s the real deal, an intelligent and affecting singer with the vocal heft and secure technique to do justice to just about anything she tries. Let’s hope her current popularity doesn’t result in a premature vocal blowout. Her Luonnotar is beautiful, but just a hair too fast. This of course makes it easier to sing, but there’s more mystery and atmosphere in the music than Gardner and Davidsen realize here. It’s my only quibble about this otherwise wholly desirable program.

As for the rest: this Tapiola has all of the eerie strangeness missing in Luonnotar–and let’s face it: Is there a more alien and spooky sounding work out there, by anyone? Gardner is so adept at easing the music from one section to another that you have to wonder why he was in such a rush in Luonnotar? The Pelleas and Melisande music goes splendidly, each of its numbers played to the hilt, with Melisande at the Spinning Wheel and the following Entr’acte especially memorable. Rakastava (The Lover) is an odd arrangement for strings (with triangle and timpani) of an original vocal work. Seldom performed and melodically elusive, it’s good to hear a fresh new version. Spring Song is another rarity. It’s hymn-like opulence sounds strangely un-Sibelian, although it represents perhaps the most extended example of a very characteristic aspect of his musical personality. It’s splendidly done, its successive climaxes especially well-judged by Gardner.

As you might have guessed, the Bergen Philharmonic sounds terrific, as do the sonics. Never mind the unfortunately zippy Luonnotar. This is great stuff.