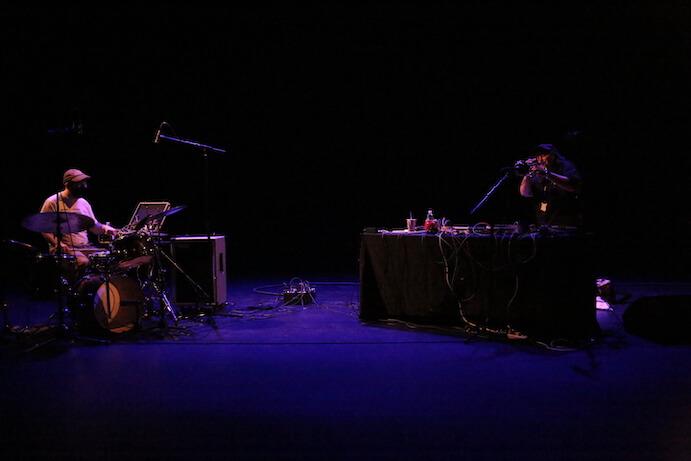 The so-called “black-body” was one of the first experiments that could not be reconciled with classical physics and led to quantum mechanics. A cavity that absorbed all light falling upon it was also radiant, and this could only be explained by rethinking the nature of light itself.

Musician, artist, and activist Camae Ayewa considers quantum Black bodies as potential, not as a problem. Under her Moor Mother moniker, her 2016 record Fetish Bones reviewed race riots throughout time, merging influences from punk and Sun Ra to bear witness to injustices. In her latest record, Black Encyclopedia of the Air, she invokes the same elements of time travel and witness, but with a lighter touch. She describes the album as:

a sonic mirage of prophetic soul mesmerizing tracks about memory and imprinting and the future, all of them wafting through untouched space like the ghostly cinders of a world on fire, unbound and uncharted, vast and stretching across the universe

…and if one listens to the music, perhaps on a cold bench the morning of summer’s death, the music does waft unbound and uncharted. But this relaxed beat and shrouded mood had to transition into a release party on September 19, 2021 at The Kitchen in New York City. To solve this problem, Moor Mother and Senior Curator Lumi Tan conceived an event that predominantly recruited other artists to build experiential layers that climaxed in Moor Mother’s performance — a non-narrative program unified by strength and eroticism that transcended sexuality. Anteloper, the Brooklyn-based duo of Jaimie Branch and Jason Nazary, kicked off the evening transforming noise into submersive trance. Their opening sequences were body-shaking, hyper-amplified cacophony, but the duo settled into rhythm, synth, and trumpet structures as our audience ears adjusted. For the first few minutes, my mind focused on the discomfort of the extreme volume, but I was surprised to notice my body loved the music, picking up on oblique rhythms and rocking subconsciously to the beat. Over the course of the set, more and more people joined in, relaxing into an embrace of blazing sound that seemed part of a burning world hungry to stay alive.

Here is a fruit for the crows to pluck,
For the rain to gather, for the wind to suck,
For the sun to rot, for a tree to drop,
Here is a strange and bitter crop.

First, DJ Marcelline stabbed a pomegranate with an elaborately carved knife. Then, she trampled it underfoot, pressing every drop of juice onto the The Kitchen floor until she lay in a bed of seeds. With projections of a burning house behind her, DJ Marcelline shed her neon blue leotard under a sheer confined structure and emerged as Eve with agency. After writing SIN on a hand mirror with lipstick, she made her choice on a pedestal, knifing open a watermelon and wiping juice and pulp on her skin. With each pomegranate trample, every watermelon dig, grunge house beats underscored Black fertility in this transition of power. Finally, Moor Mother took the floor with a spare DJ setup. She prefers to create musical experiences instead of discrete songs, and this performance embodied that approach. Rather than simply recreate Black Encyclopedia of the Air or use it as a choreography score, she ballooned one sample from the album’s first track into a dance piece exploring gender and societal expectation.

see how you have made God in your image, in your gender

Moor Mother’s presence emanated solidity. She swayed with her music — the light R&B, the easy jazz, the pops of Gospel harmony — and was undisturbed by dancer Vitche-Boul Ra’s sudden spatial takeover. Ra began dancing through genders, entering as a she, revealing and highlighting a male body, and then remaining gender-neutral for the rest of the dance. Ra strode across the black stage in direct, calm, full erratic lines.  Moor Mother’s music simply went from one block of style to another, without hiding the seams of genre and emotion, while Ra flowed across the stage in all the ways she could: athletic, shivering, acrobatic. Then, with a turn of jacket, Ra revealed himself anew. The costume altered but remained mostly intact — black heels, black skirt, black hairbun —  and spiraling movement highlighted Ra’s easy strength matched with Moor Mother’s relaxed grooves. He continued to move: mesmerizing, elegant, and beautiful. There was a thick trust between the two independent collaborators, and Moor Mother’s abrupt musical transitions became anchors in Ra’s magnificent choreography as they balanced upside-down on a chair, tumbled, and clawed against the wall.

Quantum mechanics teaches us that, to understand nature at its most fundamental level, we must go beyond dualistic and supposedly antithetical labels. A quantum function can be understood only if we accept that it is not a wave or a particle but something else, a more refined something that includes both natures. This arrogant-tender, shy-confident, party-release connected Moor Mother’s playful Black Encyclopedia of the Air project to her serious Afrofuturism work and proves the Black body as an ultimate solution.