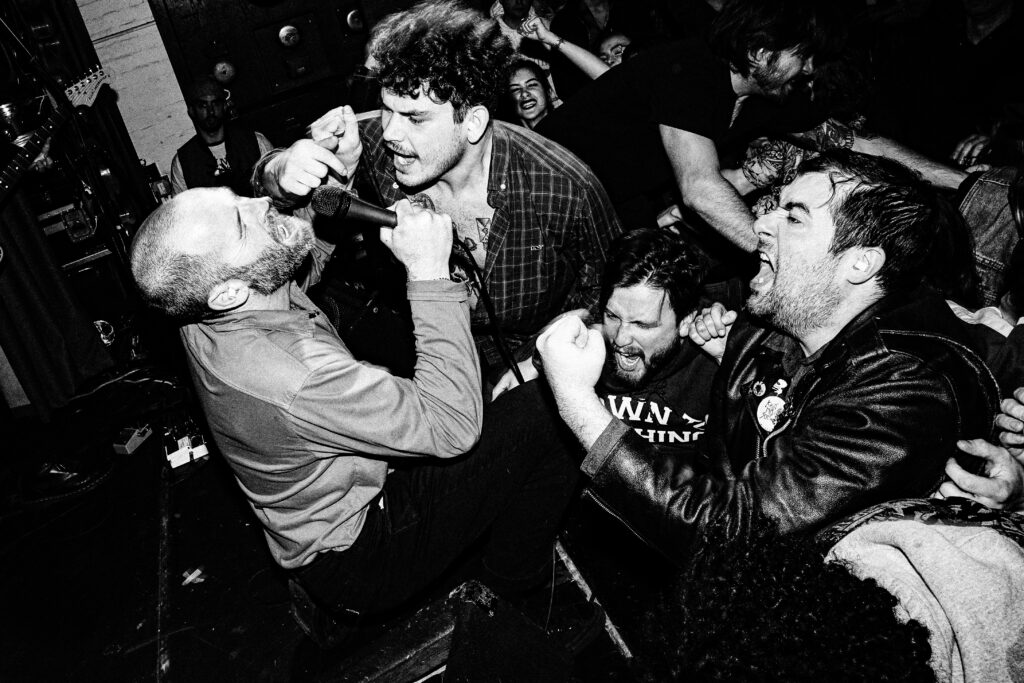 Keith Baillargeon’s energetic photos encapsulate some much about what I miss about shows. The beads of sweat dripping down the entire audience and the radiant energy of the crowd are just some of the things Keith captures in his work. I got a chance to speak with Keith about his work and his love for music and photography. Ever since I was a kid, my parents took family photos. My Dad would take photos when we travelled and that kind of thing, so photos were a big part of my life. In my teenage years I didn’t take photography too seriously until I was in my 20’s. Seeing a lot of live photography, just buying an album and seeing the photographs inside and looking up who did it, like Charles Peterson, Daniella Debrowsky, I know she did a lot of New York hardcore photos. Also having friends who shot whatever, not just shows but everyday life, and just went forward from there.

Nice, so it seemed from an early age that you had an interest in photography.

Right, I always enjoyed the art form of it all. Capturing those moments, fragments of time was cool.

How did you get started shooting shows?

I was late into the game, I didn’t start shooting until I was 29 or 30. I had a lot of friends who already shot shows and I appreciated them. So one day I was like, “I’m going to get a camera.” and I did shoot a show in high school. It was in 2002 and on a point and shoot, I had no idea what I was doing. So that was my first show. I got a digital camera and just started going to shows around the area. Just shooting, seeing local bands, we have a decent scene in  my area. Then I started getting more into just things outside of music like street photography and portraiture. I would say my love of music. Growing up my parents listened to a lot of music, so early on I would go through their cassettes. I would sit in my room and listen to the radio, record a lot of stuff. Then I started playing guitar and playing in bands and it progressed from there.

How has your relationship with music changed from photographing musicians?

I feel like since I’ve been photographing shows there’s more of an appreciation for what they do. When I’m not shooting a show and just watching, I was watching the band, but when you’re taking photos you’re looking more closely. How energetic a band might be and how that’ll make for more interesting photos. It’s definitely helped me appreciate bands and more artists in general. I mainly listen to hardcore but it helped me branch out more, because it seems like a band would be cool to shoot. There’s a lot of artists I’ve shot where I’m not a fan of their music, but it got me into their music from their live show or how fun it was to photograph them and it changed my perspective on things. I shot Warped Tour 2018 and there weren’t many bands on there but it was fun to shoot and to get the chance to do it.

You seem to work with both digital and film, what are your feelings towards both? What do you prefer?

So as far as digital goes, they both have their own spots. There’s a photographer that I know who only shoots on film and they’re amazing photos. They both have their place and I think it just comes down to who’s doing it. I find when working with film, usually black and white, that I can use it for just about anything. I would develop at home, scan at home, and it got old after a while. Instagram made it digital. I guess it all depends on what you’re going for. I know there’s an aesthetic with film now and days that a lot of people are shooting film just to shoot film. It’s cool when specific applications are used with it, although I’m not one to say throw away your digital cameras, but there’s some who shoot digital whose photos look unrealistic. Gear. Let’s talk about it. What’s your go-to camera, your first camera and the camera you’d want if money was limitless?

First real digital camera was a SONY 86000. It was my go-to and I still think that camera is great. It is a little limited. My first film camera was a Lecia CL, but it wasn’t fancy, it was made by Minolta and the light meter didn’t work. So I decided to use an app on my phone. My current set-up for digital is a SONY A72 with a Sigma 35mm f1.4 on it. It’s my go-to for shows if I have to shoot digital. I like to adapt lenses. I have some Contax lenses and they adapt well to SONY. For street, like a walk-about, a SONY X41 and I have a 50mm on that. For film, for shows, there’s a Contax RTS2. I do bring out the Nikon F3 but it doesn’t have a normal hotshoe. If money was limitless, digital wise I would get the SONY 89 or 892, it’s the top of the line. Film wise, Leica M6, my friend has one and I’m so jealous of it.

Let’s talk about photographic aesthetics, everyone has their own unique style. What do you look for in a successful photograph?

For a successful photograph, for shows, I personally like photos that capture what it would be like if someone was there. I like the artsy photos I guess. Close-ups are cool, just capturing the emotion of everything. Especially with the punk rock, hardcore, and basement shows. I like to use flash and shutter drag and I think things look cool that way. I gravitate more towards black and white photos, I prefer the aesthetics a lot. I know there’s a lot of rules of photography that people follow, but a good photo is a good photo. I’m not looking for rule of thirds and composition. I like what I like. Who are some of your photo inspirations?

There’s a photographer out of North Carolina, Reid Haithcock, he really inspired me on a lot of levels. They do portraits, landscape, he’s big on film but even his digital work is great. There’s a local friend who inspires me a lot, his name is Tom Barbee. He does amazing portrait work. A lot of the classics too. Like Ansel Adams, I know the greatness of his work, but it doesn’t do much for me. There’s a celebrity photographer who passed away, Richard Avedon. His work just looks so cool. I try to look at people that I’m friends with and there’s a lot of new photographers. It’s cool to see the community come together.

If you had to pick your dream bill to photograph who would be on it?

It almost happened but I couldn’t go because of a snow storm. It would be Every Time I Die, Turnstile, and Escape Plan, in a big venue. I flew to New Orleans for an off date with Vein, Turnstile, and Angel Du$t and I was very happy to be there. Do you have any “hot takes” on photography?

There’s one, I’ve seen a lot of people do this, the prism thing where they hold something underneath the lens, something reflective. I don’t hate it, I just am not a fan. A lot of the things that bother me about photography is over-editing. I get creating a vibe but it just seems too much. You can tell someone who is just sitting in lightroom for 2 hours to make a photo just look okay.

Any advice for the aspiring photographer?

I would say get out and shoot, but I know that’s not something we can do right now. From personal experience don’t focus on the best gear or what other people are doing. You can draw inspiration but get ideas and don’t get upset when they don’t turn out great. I was guilty of that for a long time but remember you have the control.