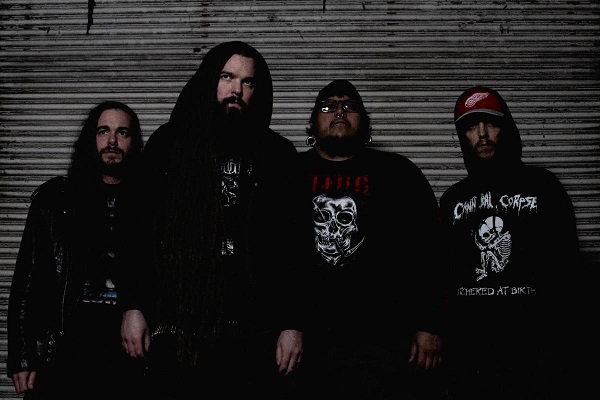 Local Music Beat: Scott Curnow of Detroit’s S.N.A.F.U. discusses the band’s new album and his favorite independent metal bands in this edition of the column

Hailing from Detroit, S.N.A.F.U. presents a commending blend of thrash, hardcore and punk that demands to be heard. The band formed in 2006 and will release its latest studio album, “Exile//Banishment,” Oct. 15 via Housecore Records in North America and Nuclear Blast in Europe.

S.N.A.F.U. have spent years releasing music independently and playing countless shows, so the step up to label representation is deserved. The band has also developed a reputation for performing fiery, intense live shows that aren’t for the faint of heart.

Guitarist and vocalist Scott Curnow caught up with Audio Ink Radio to talk about the story behind “Exile//Banishment,” the Detroit music scene and some of his favorite independent bands and artists. S.N.A.F.U. brings together Curnow with guitarist and vocalist Rian Staber, bass player and vocalist Patrick “El Toro” Saldivar and drummer Mike Jurysta. Keep up with S.N.A.F.U. online here.

Anne Erickson: Congratulations on the new S.N.A.F.U. album, “Exile//Banishment.” This is your heaviest and darkest record yet. What inspired that direction, and did it have anything to do with the pandemic?

Scott Curnow: Thanks! I think we’ve always been heading that direction. Our earlier stuff is definitely more on the punk side of things. I’m not really sure what exactly inspired us to progressively get heavier and darker over time, perhaps just where we all were at in our lives. The world keeps getting more and more f***ed up, and our music is just a reflection of that.

How did you guys go about writing and recording this set, and was it different from how you did things in the past?

Not really too much has changed with our writing process. We all write and constantly bounce ideas off of each other. Sometimes we all collaborate on a song. Sometimes someone just writes one completely on their own. Sometimes someone will even write an entire song and lyrics and have someone else sing the whole thing. I think we’re unique in that way, and it has definitely been a defining factor in our sound. As far as recording goes, in the past, we’ve always just tracked here locally. Sometimes we’d have a week or two in between sessions, and sometimes that can be frustrating. This time, however, we were fortunate enough to go down to Richmond, Virginia, and track the album with our friends Josh Hall and his brother Philip “Landphil” Hall. It was a really great experience working with such talented and respected people in the music industry. It was also different for us, in that we were there specifically to focus on making this record, and we spent an entire week, day in and day out, grinding away at trying to make this record the best it can be.

You guys have been together since 2006, and this new album is coming out via Housecore Records in the U.S. and Nuclear Blast in Europe. What does it feel like to have your new album coming out on these high-profile labels?

It’s absolutely crazy! I honestly still don’t believe it myself. We would have never guessed in a million years that this record would have landed where it did. We spent a lot of time sending it around and submitting it to different labels and just kept coming up empty handed. We were really discouraged that we weren’t getting any bites on it and just decided to go with a low key label out of Ohio that was basically a step above a self release. The day after we did the press release for that small label is when we were approached with the Housecore/Nuclear Blast deal. They came right in the nick of time!

Thank you. Yes- we’ve always had a very strong stance against racism, as well as other important social issues. While this record does have some social political themes, we did something a little different and focused a little more on personal topics. Some songs are just pure, straight-forward personal rage and hatred, and other songs focus on the same topics but expressed in sci-fi and horror theme.

S.N.A.F.U. hails from Detroit. What are your thoughts on the Detroit and Michigan metal scene?

We might be a little biased, but we think Detroit has one of the best metal and punk scenes the country has to offer. So many good bands come out of our busted, broken city, and everyone is very supportive of each other.

What are some of your favorite Detroit metal bands and other bands from across the U.S. that you think people should know about?

Oh, man- there are so many to name! Obviously, there are the heavy-hitters like Negative Approach, The Suicide Machines, The Black Dahlia Murder and Hellmouth. But, there are so many awesome bands and friends of ours, like thrashers Manic Outburst & MRSA, our weirdo friends of Child Bite, grind-core maniacs S***Life, Girth, S***F***er and Shock Narcotic. Brining the brutal death metal is Centenary, Temple of Void, Inhumane Suffering, Throne, Mutilatred (out of Toledo), Perversion and Portal Of Pazuzu. Also, all the punkers in UDI, Detroit 442, Nuke, Jail, Terror Cell and these young cats in Unabombpunx and Scum Rotten. Then, all the heavy rockers of Against the Grain, The Lucid Furs, Midas and Raw Doggs. As far as bands in other regions, we have to give a shout out to our long time friends in La Armada from the Dominican via Chicago. Those dudes rule and they’re one of the hardest-working bands around. Other shout outs include Casteless (Cincinnati), StoneCutters (Louisville), Killer of Sheep (Pittsburgh), BoneFolder (Ohio), Lich King (Boston), Rifle Diet (RIP – were out of Minneapolis), Chrome Waves (Indianapolis), Horrible Earth (Boston) and HateMonger (Chicago).

S.N.A.F.U. are known for incredible, heavy live shows. What bands are some inspirations for you, when it comes to their live approach?

Honestly, I think it’s the bands that failed to put on a heavy show that inspired us. Like, yeah, your tunes are super sick and brutal, but you sure are boring to watch. I think a lot of bands forget that they’re “performing” their songs. Our songs are such raw, intense energy that it almost comes natural when performing them live. Sometimes I feel our live set is like one big black out to me, and then I later see footage of it, and I’m like, “Did I really just spit into my hands and rub it all over my face?”

What are your favorite venues to currently play around Detroit, Michigan and elsewhere?

Well, first I’m going to use this opportunity to shamelessly plug the venue that I manage here in Detroit called The Sanctuary. It’s a really sick, 300 capacity room, and we mostly cater to metal and punk. My buddy who owns the place started out doing DIY shows in a basement and over the years was able to eventually open a legit venue in a building that was once known as Paychecks, a Detroit staple that holds a long history of punk and metal. Some of our other favorite places to play in Detroit would be the legendary DIY venue The Trumbullplex, Smalls, Old Miami and Outer Limits. As far as out of town goes, we love Saint Vitus in Brooklyn, New York; Kung Fu Necktie in Philadelphia, Pennsylvania; Northern Yacht Club in Cincinnati, Ohio; Highlands Tap in Louisville, Kentucky; this DIY spot in Denver, Colorado, called 7th Circle; The Lost Well in Austin. Texas; Black Circle in Indianapolis, Illinois; Gooskies in Pittsburgh, Pennsylvania; and Lefty’s in Des Moines, Iowa, just to name a few.

Anne Erickson’s column appears regularly in Audio Ink Radio. Have a band or concert to share? Contact her at anne@audioinkradio.com.