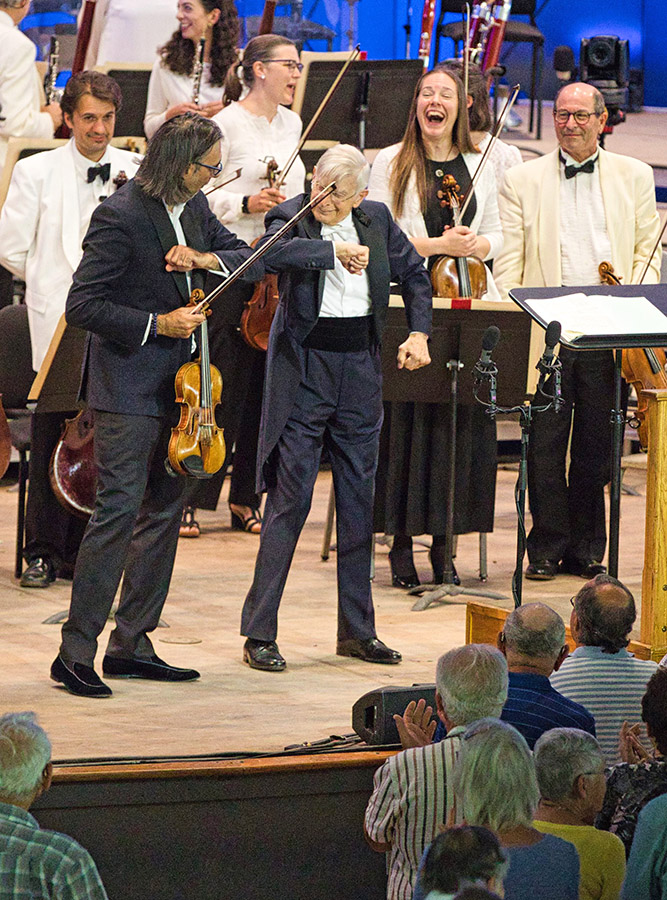 For a couple of decades it has been the custom to end the Tanglewood season with Beethoven’s Ninth Symphony, a work designed to carry music-lovers away in spasms of joy sufficient to take them to the beginning of the following summer, or at least until the BSO begins its winter season in Symphony Hall. Before the current tradition got established, the final work on a Tanglewood season varied from year to year, though it was always a major work of some weight, and usually a work that filled a program by itself and involved the chorus as well as the orchestra. In 2021, though, owing to lingering effects of the COVID pandemic, there was no vocal element at all during the season, so Beethoven’s Ninth was out, as were such earlier finales as the Mahler Eighth Symphony or Britten’s War Requiem, which have both served the purpose in living memory. So the decision was made to bring the 2021 season to its close with works (two, rather than one full-concert-length scores) by one of Beethoven’s greatest admirers, a composer who stands high in rankings for seriousness and therefore fitting for this event. The choice for the concert, then, was, probably the senior active conductor in the world today, having celebrated his 94th birthday a month earlier presided.[i]

The Greek violinist Leonidas Kavakos, who by the time he was 21 had triumphed in three major violin competitions, joined Blomstedt Sunday to essay the solo part in the Brahms Violin Concerto. This summer he also made several appearances at Tanglewood in both chamber and concerto settings. His expressive bow, his lickety-split fingering projected the full of the score, from sustained singing lines to dramatic, full-force assertions. He lilted entrancingly when he had his chance to sing the sweet second theme in the exposition (Brahms had just hinted at it for the orchestra the first time, but he allowed it to blossom when the violinist got to take it over.) And following the pensive sweetness of the second movement, Kavakos positively inflamed the “gypsy” music of the finale.

Brahmsians may (and do) argue extensively about which of his four symphonies is the “best,” but it is probably safe to say that the Fourth appeals especially to the heart of musicologists because it shows how thoroughly Brahms studied early music (certainly back to Bach, but even further, to the Renaissance composers as well) and found ways of employing “old-fashioned” musical ideas in quite new ways. All of his symphonies are intricately shaped, but the Fourth takes the crown in that matter, including a harmonic plan dating from earlier techniques in the third movement and especially the chaconne in the last movement (a form of variation set based on the steady repetition of a theme that starts in the bass, but may eventually move to other parts of the texture, against which the composer invents constant new ways of perceiving the expressive ideas). Throughout the symphony, from the chain of descending thirds at the beginning to the powerful close, Blomstedt signaled, and the BSO players responded, with a full range of expressive qualities, barely whispering at first, advancing then receding, smoothly then detached, giving the sense that every and note every line purposely interwove to support the formal structure. The close may not offer the thrill of Beethoven Ninth’s all-but-hysterical finale, but rather, it suggests the firm solidity of an utter master.

[i] Blomstedt was born in Springfield, Massachusetts, of Swedish immigrant parents, who returned to their native country when he was just two years old. His studies in Sweden, Paris, and the United States (at Juilliard) brought him to Tanglewood, where he studied with Leonard Bernstein in1953, winning the Koussevitzky Conducting Prize at the end of that summer—68 years ago! As a senior figure among conductors today, Blomstedt maintains an alert but not showy demeanor onstage, carefully building the sound of the orchestra and balancing the dialogue of the sections.