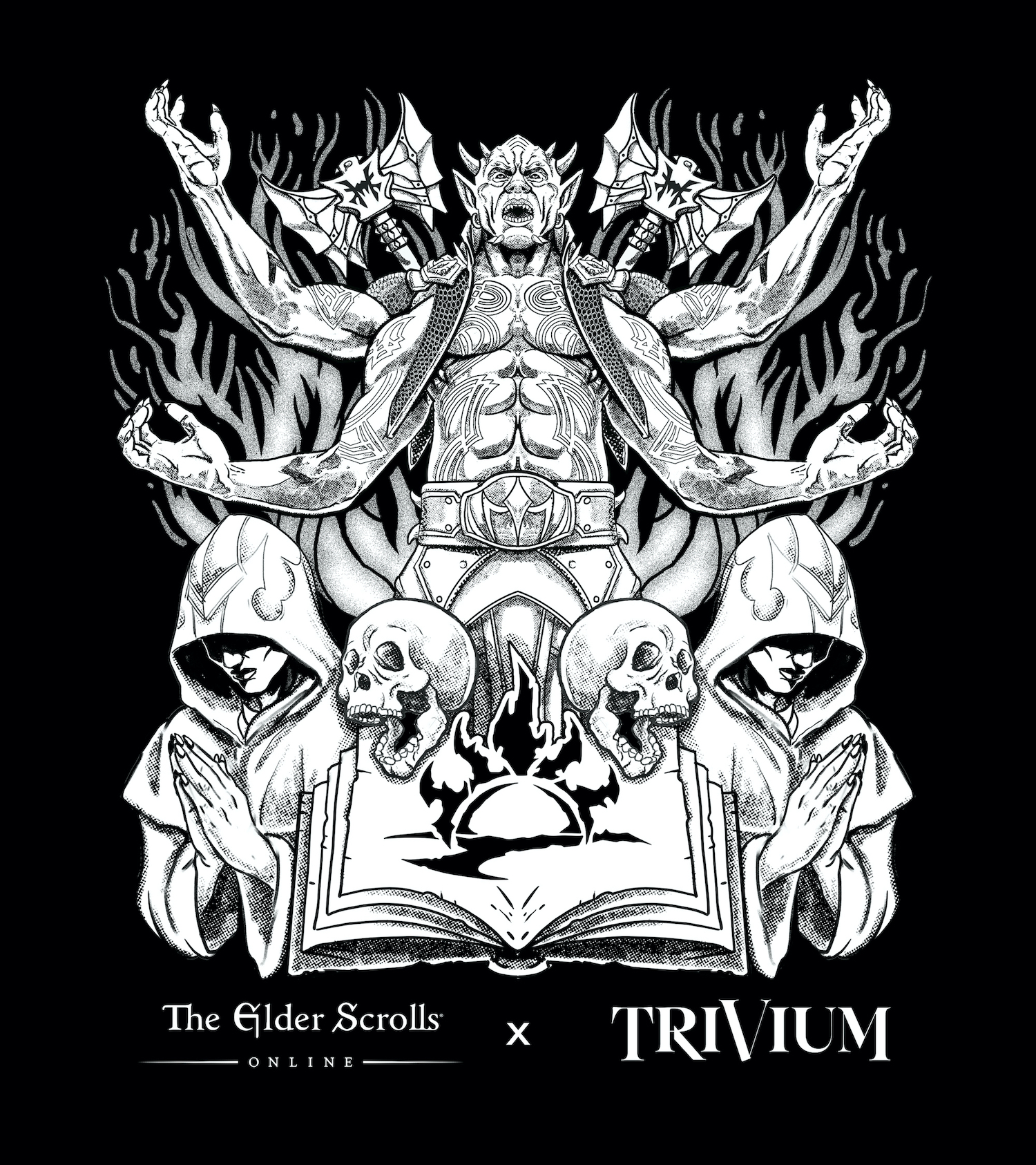 “I’m so honoured that Trivium has got a bard song into Elder Scrolls Online, and for having the opportunity to collaborate with ‘The Phalanx’, but I want to go further,” says Matt Heafy, guitarist and lead vocalist for Trivium. “I want to be there for the building of the house, not just the painting of it. I want to be there from the ground-up, someday.”

Trivium has just announced a collaboration with Bethesda on Elder Scrolls Online. As well as a far-reaching marketing partnership that includes a custom guitar giveaway, the band has also created two new tracks for the game: a re-imagining of one of the game’s original bard songs, and a new Trivium track, ‘The Phalanx’. For Heafy, this is a dream come true: he has been into games all of his life and some of his earliest memories, he tells NME in a roundtable interview, revolved around video games.

“My dad is a marine, and my mum is Japanese, and we left Japan when I was one – so I was raised with a lot of these Japanese things my mum knew; that was a lot of anime and video games,” Heafy recalls. “I beat Mario when I was still mostly speaking Japanese with my mum! I progressed from there to games like Final Fantasy and RPG games, where there was a lot more of this Tolkien-esque look than a lot of other stuff that was going on.”

Trivium, it turns out, is a good fit for Elder Scrolls Online – aside from metal’s historical relationship with all things high fantasy, Heafy is a long-time Bethesda fan that “grew up playing Skyrim, Elder Scrolls and Fallout games.” The thematic content of the games, and metal at large, are part of his DNA at this point. “Sometimes I wonder why I’m so into the imagery that you see in some of the greatest fantasy games out there, and I think it’s related to the fact that I got into games before I got into music,” he tells us.

“That must have had an impact on me later on: [that imagery] had me gravitating towards metal that had much richer visuals. That’s something that metal has always had – looking at those classic metal album covers, it was a world I wanted to be in and it was a world that I really painting the soundtrack to.”

Heafy goes on to explain that there’s a host of Trivium tracks that have referenced books, graphic novels, video games, movies, and more besides. But it’s one thing to be inspired by something, and another entirely to create for it. “It’s always been a dream of mine – for basically my entire life – to get into scoring games.”

Luckily for Heafy, then, Bethesda has given him a chance to get his foot in the door. “When I found out about this collaboration, I freaked out,” he laughs. “I was able to cover a bard song and turn it into something different! And we’re going to have artwork from Elder Scrolls Online in one of our videos – it’s just such an amazing thing. I’ve always felt that games and metal are so synonymous, that they draw the same kinds of people – the underdog – into these fantasy realms.”

Despite this formal collaboration being the first time Heafy and the band have been drafted in to make a song specifically for a game (once upon a time, Trivium recorded a Simlish version of ‘Like Light to the Flies’), it’s not the first time Heafy has drawn from his game-filled well of inspiration to create music. Not by a long shot.

“Ever since I was a kid, Doom and Final Fantasy have made me realise that music is fantastic,” Heafy explains. “All of us in Trivium, we consider ourselves ‘students of the genre of metal’: if you play me three different Scandinavian bands, I could tell you which one is from which country by knowing the roots of the music. I feel like we’re plant genus scientists, but for metal.

“So going digging back into Final Fantasy VII later on in my life, I was like ‘wow, that’s a lot of Rainbow’ and ‘oh, there’s some Dio in there!’ When I listen back to Doom, that’s Metallica and Slayer – and it’s such an amazing thing to see that.”

Tying the two threads of gaming and metal together in Trivium’s own music is something Heafy has been doing tacitly for a long time. He notes that ‘The Calamity’ – a track from the band’s fourth album, ‘Shogun’ – is based on Final Fantasy VII’s epic boss theme, JENOVA. “I wouldn’t call it a retelling of JENOVA, but the idea of ‘The Calamity’ is heavily inspired by that song,” he explains. He also notes that there’s a pretty explicit callback to Doom in ‘Tread the Floods’ from ‘The Crusade’: the lyric ‘I’m knee-deep in the dead still waiting’ is referencing the first level from Doom. Given how close gaming has been to Trivium’s output for the last two decades, then, it’s no surprise to see Bethesda make use of Heafy’s games and metal knowledge for Elder Scrolls Online.

But what does the future hold for Heafy – and potentially Trivium as a whole – once this first crossover with Bethesda is complete? “I would love to do more [collaborations],” he says when asked if he’d like to work on more games in the future. “It’s been no secret that – since I first heard Doom and its 8-bit soundtrack and thought ‘this is metal!’ – working on Doom has been a lifelong dream. I’ve even bugged Hugo Martin, [creative director at id Software], a little bit about it when I was at QuakeCon and worked on something I call E1M1 II, a sequel if you will to Doom’s E1M1.”

So far, then, Heafy has toyed with songs in the Doom universe, and he’s been able to create something that’s going to be included in Elder Scrolls Online. Not bad for someone that isn’t a games composer, professionally. But this is just whetting his appetite for the next step of his career in the video game industry – proving that he’s got what it takes to make a full game OST of his very own.

“Someday, I’d like to not just do a song, but paint an entire canvas of what a game can sound like – that’s been a dream of mine just as long as it’s been a dream to be in a successful metal band.”

Heafy goes on to explain that – should he ever get the chance to fully score a game – it would be something “very neo-classical and baroque” mixed with Scandinavian death metal. When Heafy looked at the art of Elder Scrolls Online and immersed himself in its world, he “heard stuff that sounds like Hans Zimmer plus Amon Amarth, plus some black metal with symphonic elements.” If he went and produced music for a shooter, though – you know, like Doom – his style would err more on the side of industrial and metal. Naturally.

“I do feel that there are the right genres of music for different genres of games,” Heafy notes before offering some wonderful, intricate explanation to illustrate how his brain pieced the Elder Scrolls Online track together. “Swedish melodic death metal – or the Gothenburg scene – is drawn from Tampa death metal, Swedish traditional folk music, and the new wave of British heavy metal. So when I thought of Elder Scrolls Online, I thought of Swedish death metal with those baroque, classical elements and getting the balance of the two right.”

It’s clear Heafy knows what he’s talking about: music and games are in his blood. With ‘The Phalanx’ and the Elder Scrolls Online collaboration, it’s more obvious than ever Heafy’s future could lie embedded in game soundtracks – as well as on streams and on stage.

“I want to be there for the building of the house,” he told us earlier in the interview… we just hope Hugo Martin was listening.

The Elder Scrolls Online: Deadlands will debut on November 1 for all PC/MAC and Stadia players, and on November 16 for all Xbox Series X|S, Xbox One, PlayStation 5, and PlayStation 4 players.

‘The Phalanx’ appears on ‘In the Court of the Dragon’, the upcoming tenth studio album by Trivium, which launches on October 8, 2021.