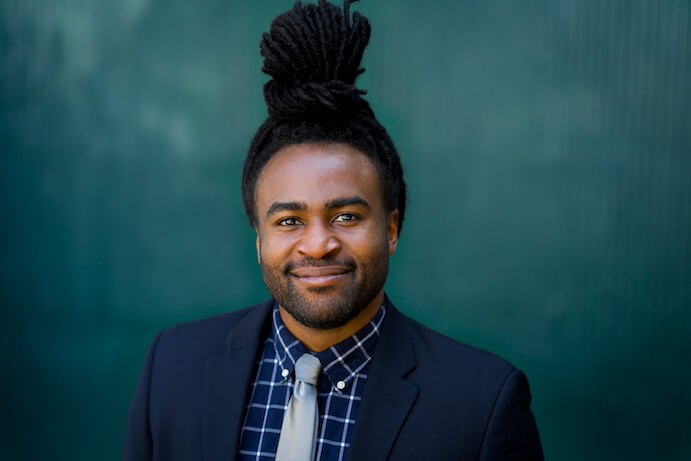 In his August 2019 essay for I CARE IF YOU LISTEN, Alexander Lloyd Blake observed, “An altruistic desire exists within the performing arts community — however, the next steps involve more deliberate efforts in order to ensure that socially-engaged concerts serve as a productive outlet to join the fight against injustice.”

This focus on not only drawing attention to social justice issues, but also connecting people to actionable next steps in their communities is central to the mission of Tonality, the LA-based choir founded by Blake in 2016. Tonality’s second album, America Will Be, continues this work with a collection of genre-crossing commissions by Melissa Dunphy, Roman GianArthur, Shawn Kirchner, Cristian Larios, Joel Thompson, Joseph Trapanese, and Alex Wurman. Each track will be accompanied by a music video and a list of organizations working to address the topic explored in the composition.

Melissa Dunphy’s “#UnitedWeDream” from American DREAMers sets a text by Claudia D. Hernández in response to the recent rise in anti-immigrant rhetoric. Dunphy’s straightforward, simple, and effective setting highlights the central message of the text: “You Belong.”

Here’s what Alexander had to say about the album and Melissa’s work:

America Will Be is our attempt to bridge the genre of choral music to the issues of our time in a way to spark dialogue and encourage empathy through storytelling. It is an honor to continue our work with Melissa Dunphy, a composer who has also centered her compositional output to highlight stories around topics of justice and equity.

America Will Be is out on Aerocade Music on August 20, 2021, and you can pre-order the album now.

Established in 2016, Tonality is an award winning ensemble known for “open hearted singing” (Lauri’s List). Tonality’s most recent award is the 2020 Chorus America/ASCAP Award for Adventurous Programming, a prize given for commitment to singing and commissioning new works. Tonality is led by Founding Artistic Director Alexander Lloyd Blake. Blake imagined Tonality as an ensemble that represents the diverse cultures and ethnicities within the Los Angeles area. Within a year of its forming, Tonality’s mission evolved to use their collective voices to present concerts on themes of social justice in hopes to act as a catalyst toward empathy and community activism. The group premiered its first album in 2019 titled Sing About It. Tonality is best known for creating choral concerts that focus on issues rarely presented in choral music. Concerts themes have included gun violence, homelessness, refugees, climate change, mental health, women’s rights, and exercising democratic rights.

Composer Melissa Dunphy specializes in vocal, political, and theatrical music. She first came to national attention when her large-scale work the Gonzales Cantata was featured in The Wall Street Journal, on Fox News, and on The Rachel Maddow Show. Other notable works include Tesla’s Pigeon, which won first place in the NATS Art Song Composition Award, and What do you think I fought for at Omaha Beach? which won the Simon Carrington Chamber Singers Competition. Dunphy received a 2020 Opera America Discovery Grant for Alice Tierney, a new opera commission by Oberlin Conservatory set to premiere in 2023. She has been composer-in-residence for the Immaculata Symphony, Volti, and the Saint Louis Chamber Chorus; commissions include works for VOCES8, Cantus, Mendelssohn Chorus, and the Kennett Symphony. Dunphy has a Ph.D. from the University of Pennsylvania and a B.M. from West Chester University and is on faculty at Rutgers University.

Claudia D. Hernández was born and raised in Guatemala. She’s a photographer, poet, editor, translator, and a bilingual educator residing in Los Angeles. Hernández is the author of KNITTING THE FOG, a finalist for the 2020 Firecracker Award in Creative Nonfiction. She is also an award winning editor for her anthology photography book titled WOMEN, MUJERES, IXOQ: REVOLUTIONARY VISIONS, which received the International Latino Book Award in 2019. She is the founder of the ongoing project: Today’s Revolutionary Women of Color. Claudia holds an MFA in Creative Writing from Antioch University Los Angeles. Various online literary journals and anthologies throughout the United States, the UK, Canada, Mexico, and Spain have published her work. Claudia is the recipient of the 2018 Louise Meriwether First Book Prize.