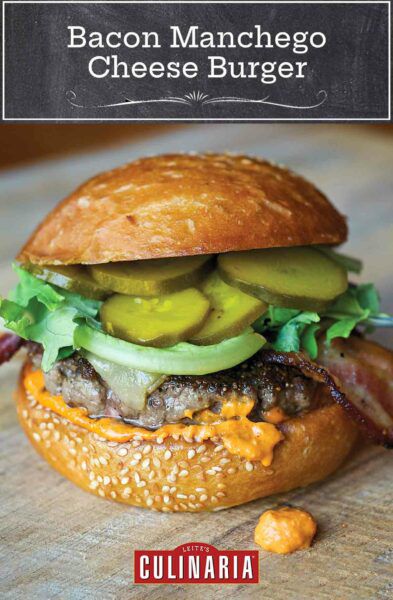 This bacon Manchego cheeseburger made with freshly ground beef, Manchego, and romesco sauce is brilliant, surprising, inspired, and so harmonious it’s as if the ingredients were fated in the stars to be together.

In the beginning, we fielded a lot of complaints about our bacon Manchego cheeseburger. Not about the burger itself. (It’s perfect.) Just that a Spanish restaurant had a burger on the menu. But burgers are everywhere in Spain—especially in Madrid—and whenever I’ve visited I’ve always been able to find one, which is crucial when you’re sick of seafood and craving something simpler. Beyond that line of burger defense, we’ve always wanted to be an affordable neighborhood restaurant with a really top-notch $10 burger. This is it.–John Gorham and Liz Crain This bacon Manchego cheeseburger made with freshly ground beef, Manchego, and romesco sauce is brilliant, surprising, inspired, and so harmonious it’s as if the ingredients were fated in the stars to be together.

*What is chuck flap beef?

Chances are you’ve not had a burger like this before. Not just because of the Spanish-inspired accoutrements, which result in it being, essentially, a bacon Manchego cheeseburger, but because of the burger itself. See, the authors rely on a cut of meat called the chuck flap, which is a large section of rib meat with a lot of extremely beefy flavor. It’s essentially a particular kind of chuck.
Four parts ground chuck to one part ground rib eye works just dandy in its place in the recipe below. (One of our dear and discerning recipe testers did the math for us, and it equates to 2.4 ounces ground rib eye and 9.6 ounces ground chuck. Besos, Robert!) Best. Burger. Ever. Olé!