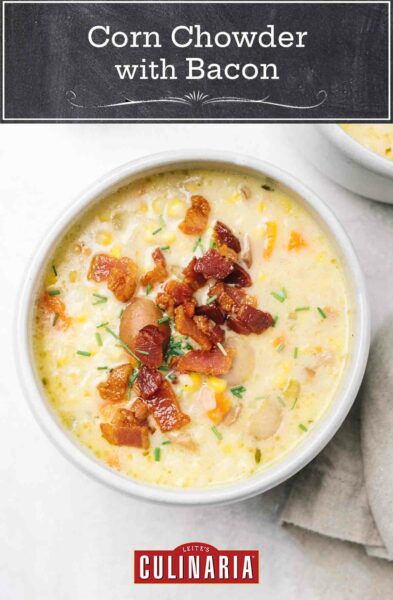 Corn chowder with bacon is a lovely late-summer meal that is full of fresh flavors and comforting creaminess. Not too heavy but still satisfying because of the addition of bacon, cumin, turmeric, and thyme.

Corn chowder is the king of farmhouse chowders. Hundreds of recipes for it have been published over the years, but since corn and salt pork were staples of the American farm, it’s likely that corn chowder was being made and enjoyed long before any recipe was ever printed. The use of milk, cream, or condensed milk also varies from recipe to recipe. The Shakers are renowned today for their austere yet beautiful furniture, but they were also highly regarded for their cooking skills, especially their farmhouse chowders. My version of corn chowder is made similar to the Shaker style, according to a recipe from the Shakers at Hancock Village in Pittsfield, Massachusetts (circa 1900), using fresh corn, butter, and cream. Its mellow, sweet flavor and lovely, pale golden color are very comforting, and it’s a favorite with children as well as adults.–Jasper White Corn chowder with bacon is a lovely late-summer meal that is full of fresh flavors and comforting creaminess. Not too heavy but still satisfying because of the addition of bacon, cumin, turmeric, and thyme.

*What is slab bacon?

Really, it’s pretty much what it sounds like—it’s just bacon before it’s been sliced so it’s still in the ‘slab’ form. Cured and smoked, it also usually has the rind attached. The interesting thing is that if you can get your mitts on a long slab of pork belly then smoke and cure it, you’ve made your own bacon. If you can’t find slab bacon (or don’t have the ambition to make your own) you can try a really thick sliced bacon, instead.