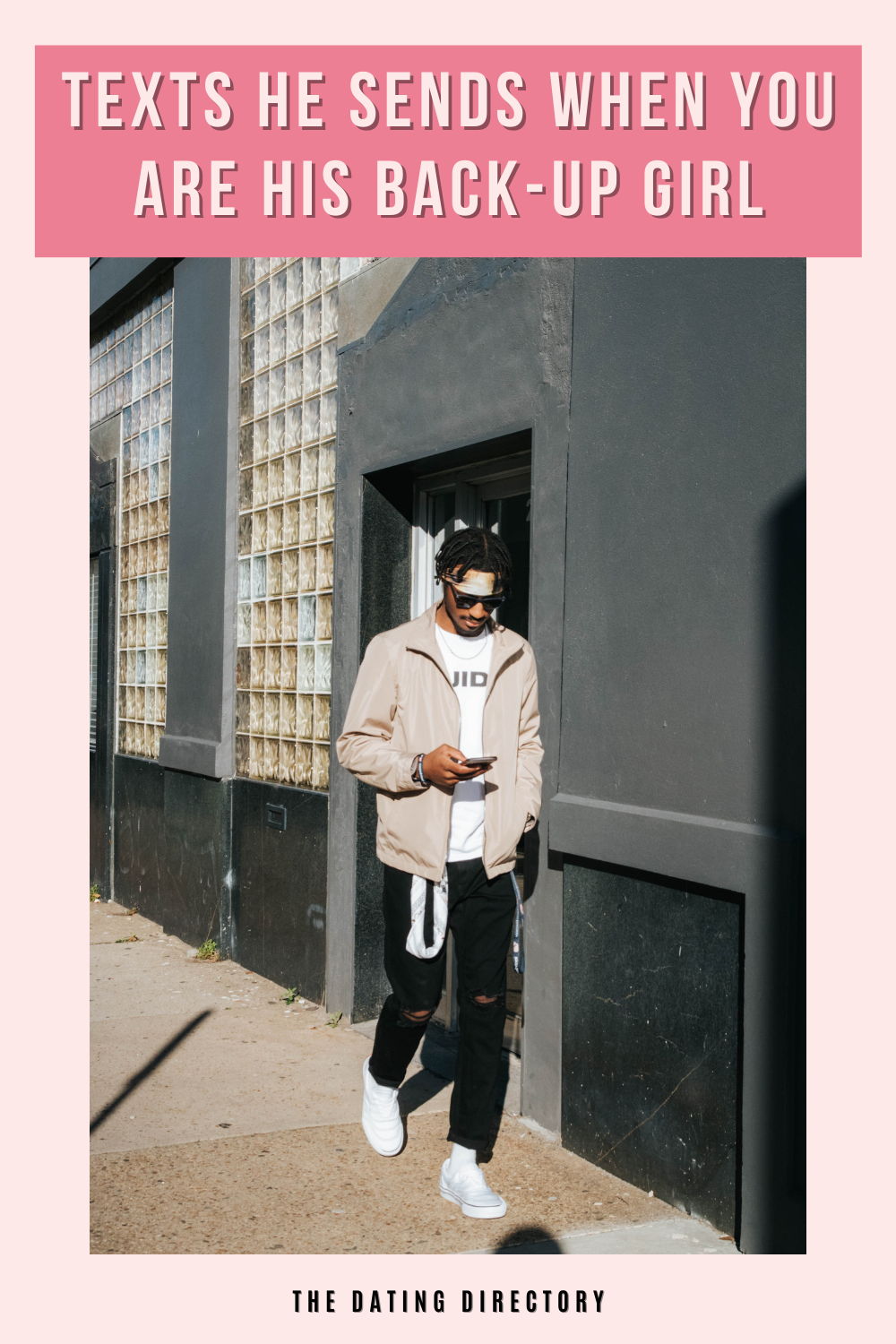 The girl that’s just there for him when there’s no one else.

Basically, you’re a convenience for him and he has you on speed dial because he knows that he can have access to you instantly.

Well, there are actually several texts that he will send that will give an indication that you are his backup girl.

So if you want to know what they are, then this article is for you.

Hi everyone,  I’m Renee Slansky and I’m a professional dating and relationship coach.

I want to tell you some of the specific types of texting and texting styles that a guy will send you if you are his back-up girl.

WYD obviously stands for, what are you doing? A man who can’t even string together a proper sentence to actually genuinely know what you are doing and how you are and how’s your day is a man who probably isn’t ready to put a lot of effort into getting to know you and wanting to romance you.

I think it’s a really lazy way to text. If he’s lazy with texting you, then chances are he’s going to be lazy in other areas of wanting to date you and putting in an effort.

This might be because he’s actually expending his energy elsewhere into other girls, hence why he just wants to keep conversation really quick, simple, and to the point with minimal effort to try and get a response from you straight away, because it’s convenient for him right then and there.

This usually happens at random times, usually late at night.

Just because he’s thinking of you late at night doesn’t mean that he’s in love with you and wants to build a relationship with you.

I personally think that a you-up text is more of a booty call if anything. Any sort of texting after 10 PM that isn’t sincere or isn’t caring is really a text for him to see if he can still have access to you at all times of the night.

Now, whether or not you then progress that into texting back and forth or going over to his place or having him come over to your place, well, really then just set the standard for what are the type of relationship that you’re building with him.

Either way, the fact that he thinks that he can just text you randomly in the middle of the night asking you the question and not even a full sentence, simply two words, you up, shows that, again, he’s not really to set time aside at a reasonable hour to actually get to know you and prioritize you.

Now, that might be really nice to have a text like that if you’re wanting to see this guy.

However, this text usually comes at every last minute. It’s not like he’s planning something with you in advance, or maybe you haven’t heard from him for a couple of days, and all of a sudden he’s asking you on a date.

For me, somebody who says, “You free tonight?” and comes across the really casual saying, “Hey, how are you? Are you free tonight?” Again doesn’t show that he’s really putting in the effort to actually try and take you on a real date.

Somebody who wants you to be his main girl, you’re a priority, is somebody who plans things in advance with you.

They say to you, “Let’s book something on Friday night,” or, “What are you doing this weekend? I’d love to actually take you on a date.”

Just because he sends you some random texts spontaneously asking if you’re free tonight doesn’t necessarily mean that he has the right intentions behind it.

If this is something that you find yourself getting caught up in all the time, where you get hung up on guys, where you attract guys that are just basically doing these sort of things that maybe are not actually able to recognize what the red flags are.

So what I suggest is downloading my free cheat sheet, the red flag guide, or the red flag cheat sheet, and this will give you an indication of what you should be looking for to really understand somebody’s character and intentions when you’re dating them.

We all get that guys gets busy.

However, if he suddenly texts you this after days of not communicating with you or you asked him a question and he never got back to you, and then two days later, he responds with that, well, I can tell you right now he’s either busy texting other girls, romancing other girls or he just really doesn’t think of you as a priority in his life.

Because when I say back-up girl, it doesn’t necessarily mean that there are other women in the picture.

Maybe you’re a back-up or your second when it comes to his work or his mates or other things going on in his world. Either way, you’re not a priority here.

Somebody who sends you a text message excusing them not getting back to you days later saying they’ve been busy, for me, it’s a little bit of a lame excuse.

You can’t tell me that within 48 hours or even 24 hours you can’t find literally three seconds or one minute to text somebody back and respond to even to say, “Hey, I would love to talk to you. But right now I’m super busy. Can I call you later?”

There is a difference in a man who is able to communicate that he’s busy as opposed to a man who leaves you hanging and then apologizes for leaving you hanging saying he’s busy and then just expects that everything’s lovely and dandy.

We need to understand that communication standards with a guy should start straight away. That means that you don’t just keep responding every time he leaves you hanging for a couple of days pretending that everything is okay when it’s not.

Another way that you can tell that you’re his back-up girl, unfortunately, is this.

5. He drops emojis to you but doesn’t actually have a real conversation.

Maybe he drops emojis through texting to you like a little hot or a little fire symbol or some random picture. I don’t know. Or he does it on your Instagram where he comments on it, but not with an actual comment, just an emoji.

Somebody who communicates purely via emojis is somebody who’s probably being lazy with actually having a real conversation with you.

You want to feel like, “Hey, let’s have a conversation here. Let’s actually talk to each other. or pick up the phone and call each other and actually organize the next date.”

A guy that just drops hot emojis or love heart emojis on your socials or through your phone without actually initiating a real conversation, unfortunately, he’s most likely keeping you as his convenience call girl.

It’s very nice to have compliments like that. However, if he just does it randomly after you’ve posted a hot pic or are you’re sending him a hot pic, but then he doesn’t actually back it up with anything that is substantial or some sort of real date, meaning, a guy that says, “Look, you look so beautiful. When can I take you out for dinner again?” Or, “When can we make sure that we’re able to see each other again because I miss that gorgeous smile of yours.”

Someone that actually has full-length conversations with some sort of commitment in there has a completely different intention, as opposed to someone that just drops a random comment and then doesn’t really allow it to go anywhere.

Or it starts to go downhill and it starts to get really sort of sexual in his innuendos and texting or becomes quite sexual, okay? We need to start identifying the difference here.

Not necessarily getting on the defensive, but really seeing, well, a guy that is interested in me, that prioritizes me, a guy that wants to build something with me won’t just leave me hanging, won’t just give me random compliments without actually following through what he means with those compliments, and if he does follow through, it’ll actually be because he genuinely wants to spend time with me, not just my body or my face.

All right, ladies. I hope that cleared it up for you. Let me know what texts you get in the comments on my YouTube Channel. So that way I can help decipher them for you or my community can help as well. Don’t forget to get that red flag cheat sheet, which you can download straight away and have a look at to see what other things are popping up that maybe is an indication that you’re dating someone who really you shouldn’t be dating. Until next time, don’t forget to subscribe to my YouTube Channel. Give me a thumbs up and I’ll see you, ladies, next time. Bye for now.