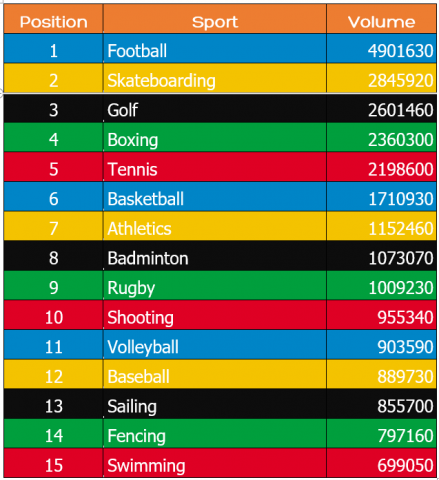 With the Tokyo summer Olympics now upon us, here at Koozai we thought it might be fun to use our search expertise to explore what people around the world are most interested in when it comes to sports. We’ve analysed available data from 188 of the competing countries against the top 40 Olympic sports to see what search trends we could uncover. Below you can read our findings to see precisely what sports countries around the world are backing.

What’s the most searched for sport?

This is a big fat win for the football fans – out of 188 countries that we’ve analysed search data for, a whopping 59% are telling us that football is their favourite sport to tune into. To put this into perspective, it holds a massive 4.9million average monthly search volume across all 188 countries, with 1.2million of this attributed to the UK alone! It seems we’re even more into our football than anyone even realised.

Interestingly, some articles such as Bleacher Report have led us to believe that gymnastics is the top sport to be watching, mainly because it gets so much coverage on the TV alongside swimming, but the data is telling us that this isn’t what the world is hungry for. In fact, our data shows that not one of the 188 countries searched for gymnastics or swimming above all other sports included in our research.

Interestingly, second place is awarded to boxing, with the likes of Sweden, Denmark and Argentina flying the flag, but worldwide, it only equates to 8% of the total, which goes to show just how much influence football has over the world’s sporting entertainment.

What if we banished football from the equation?

If we removed football, overall, the data is screaming tennis! This is spear-headed by our neighbours Italy and France, both sporting 246,000 average monthly searches, but it also represents 23% of worldwide interest. Basketball is in second place, with Rwanda taking the lead on searches with 90,500, and 14% of the world looking interested in trying to catch a slam dunk.

Our search data has also unveiled some rather interesting sports coming out on top for certain countries. For example, who knew the Japanese are search fanatics when it comes to diving? Their most successful, medal-collecting sport to date is Judo, but the data is telling us there’s a 178% difference in their interest between the two sports with diving on top (33100 vs 1900). In fact, Japan is yet to win a medal for diving, so perhaps they’re looking to enter new territory this year? We’ll find out soon enough!

On top of this, we were also surprised to find that skateboarding is coming out on top for a few different countries. Take Germany for example, known for their top-quality football and also having previously won 28 gold medals for track and field; but the search data suggests they’re more interested in skateboarding – 92% more interested in fact (201,000 vs 74,000).

The same goes for Team USA, another track and field dominator with a whopping 333 gold medals so far. They’re looking forward to tuning into the skateboarding more so than anything else, but seeing as skateboarding was born there, plus it’s a new entry for the Tokyo 2020 competition, we can’t really blame them.

Canada is picky about its water sports

Top of the search data pile for our partners across the pond in Canada is sailing, a sport us Brits can totally get on board with (no pun intended!), but when it comes to getting wet, it would seem the Canadians are less excited. There’s a difference of 172% between search volumes for sailing and swimming (301,000 vs 22,200). And it’s not just the Canadians that aren’t all that interested in swimming either, the sport doesn’t actually come out on top for any of the 188 countries we’ve analysed search data for.

The Brazilians, Turkish and Polish are keeping a keen eye on the golf

When you consider that these countries are pretty small on the golfing scene overall (there are around 100 courses in Brazil, 35 in Poland and just 23 clubs in Turkey, compared to other European countries such as Germany (737), France (599) and England (1,923)), it’s surprising that the data shows such an interest in the originally Scottish sport.

What do you know about handball?

Although handball and its attire has recently received a lot of media coverage, it’s not a sport that usually gets a lot of love. It would seem this isn’t true for the 2020 Olympics and Uruguay though, as handball tops their search results over all other sports. As a country, their search data is showing a 26% increased interest in handball over their second favourites: basketball, golf and rugby.

Although Egypt has won most of its medals through boxing efforts, the data showcases that the highest number of searches in Egypt is for fencing. They’re the only country that’s backing the sport too. Fencing was originally started in Spain and was also one of the first sports to appear in the modern Olympic games as we know and love it today, so albeit having a constant place in the games since 1896, it would appear that there’s some love lost for this old-school combat sport.

Get up close and personal with the data: top 10 Olympic sports across the globe based on search data