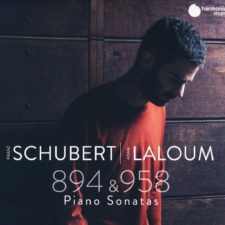 The pandemic year of 2020 may also have been Beethoven’s 250th birthday year, but for some reason that event coincided with a flood of recordings of late Schubert sonatas! Adam Laloum’s was among them, and he certainly displays total command of the keyboard, possesses an attractively singing tone, and doesn’t put a wrong foot forward, or, more accurately speaking, a wrong finger. I generally find his playing more agreeable than gripping.

He ruminates over the G major sonata’s long Molto moderato, complete with exposition repeat, tending to stay on a more-or-less uniform expressive level, whereas the even slower and determinedly austere Sviatoslav Richter generates more palpable note-to-note tension. And Shai Wosner’s more nuanced and flexible reading better taps into the music’s “Fantasia” sobriquet. Laloum’s imagination and phrasing loosen up more for the inner movements (a few ear-catching tenutos and arpeggiated chords in the Scherzo suit the music’s style perfectly). By contrast, his Allegretto Finale falls into a kind of no-man’s-land between Alfred Brendel’s geniality and the faster, more playful Radu Lupu and Volodos versions.

The C minor D. 958 first movement’s epic vision and heightened dramatic contrasts basically flatten out and settle into cruise control in Laloum’s hands; compare any random section of his reading against Richter, Murray Perahia, Leif Ove Andsnes, Imogen Cooper, or the first Brendel recording to hear what’s missing. While the Adagio is songful and well-sustained, Laloum’s soft-grained and wilting Menuetto has none of the rippling shape or linear interest heard in the Paul Lewis and Maurizio Pollini recordings. The finale can’t be faulted for clarity and cleanliness, yet it conveys the galloping urgency of a hobbyhorse. Where’s Brendel’s bucking bronco, or Richter’s thoroughbred, or Claudio Arrau’s fractious mare? In a less competitive catalogue, Laloum’s virtues might warrant consideration, yet, as you’ve gathered, our comparisons speak for themselves.