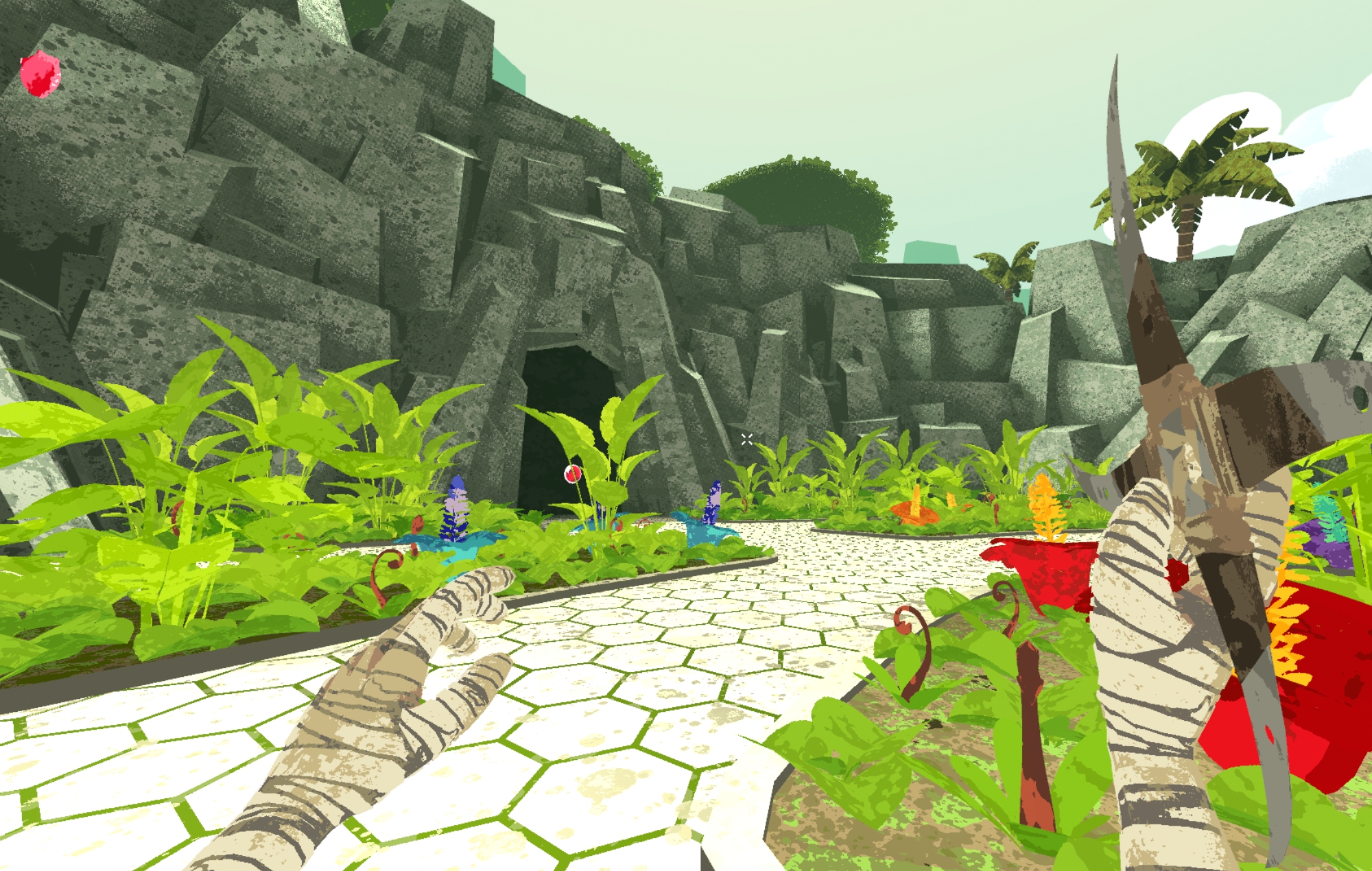 The best indie games are often built around one solid game mechanic, and Boomerang X is no exception. Developed by DANG! and published by Devolver Digital, Boomerang X is a fast-paced FPS arena shooter with the slight wrinkle that, well, there are no guns.

Firearms are instead replaced by a combination of magic and a versatile four-pronged boomerang that sits at the heart of everything in the game. Movement, combat, and progression are all instinctively tied to the boomerang, which by the end of the game acts as an extension of your character and not just a tool of destruction.

To get to that level of affinity with the Boomerang takes practice and Boomerang X eases players into the game by offering several tutorial areas. It’s during this section that you’ll get to grips with the combat and movement. On PC, a left-click of the mouse button flings the boomerang where you aim it, a right-click recalls it instantly. Hold down the left mouse button before throwing the boomerang and it will go further.

Everything else Boomerang X introduces is an extension of those core mechanics. You’ll learn how to slow down time or even get to shoot a shotgun-like blast or a one-hit-kill laser from your hands. It’s impressive how well these additions fit in with the combat. There are no wasted abilities in Boomerang X, and everything seems designed for one aim: giving you the best chance to survive in combat without taking anything away from that boomerang.

It’s when you start chaining those numerous abilities together that Boomerang X really shines. Kill three enemies in a row with one boomerang swing and you’ll gain access to the the shotgun-like ability. Kill enemies with that ability to unlock the aforementioned death laser which decimates tougher enemies. Later on you can unlock an ability that sends a shockwave up every time you hit the ground. Chaining these attacks together is both challenging and inherently fun, providing the player with motivation to perform well.

Enemy diversity is also incredibly tight, as the game continuously introduces new, challenging enemy types. Each area starts off simple, with enemies that go down with a single hit. As you progress, the game demands more of you. New enemy types require specific hits either behind or below them, while others will simply spawn with a companion who provides a shield. The variety present in enemies keeps you on your toes, and tests your ability to react on the fly. I never found myself falling into a predictable routine during fights, as you have to adjust your strategy at a moment’s notice all the time.

Later levels reminded me of Doom Eternal’s frenetic battle arenas and how it demanded the player to move around. Stop to take a breath in Boomerang X and die. This is a game that demands you to jump the length of the arena in order to succeed in battle, moving constantly so the swarm of enemies can’t close in around you.

Boomerang X also reminds me of Downwell, which is another indie game that focuses on movement as a core mechanic. It’s not enough in Boomerang X to kill whichever enemy is in front of you, you also need to think one step ahead and ensure you won’t be caught vulnerable by the enemies surrounding you. Chaining kills together while zipping across arenas feels incredibly liberating, a feeling which is enhanced by how great the game controls on mouse and keyboard.

Outside of combat, each arena is broken up with corridors, halls, and areas for players to traverse. I’d have liked to see a little more platforming throughout these sections, as movement is such a delight. There is a loose narrative threaded throughout Boomerang X, although much of it is told through the environment itself. You’ll visit barren villages, empty living spaces, all of which were savaged by the monsters hellbent on killing you. Oh, and there’s also a lovely millipede called Tepan that you meet on a few occasions.

Boomerang X’s frenetic combat is juxtaposed by ethereal visuals that wouldn’t look out of place in a Vincent van Gogh painting. There were moments between the game’s high-octane area battles that I stood still, admiring the serene world around me. Even though the game’s story elements are pretty light, the world and visuals are incredibly immersive. There’s a tangible feeling of emptiness in the world, and DANG! should be applauded for achieving that.

Players can toggle a high contrast mode, switch on boomerang charge mode which removes the need for holding the mouse button down and can even turn on infinite flux, which is Boomerang X’s overdrive mode which enables the player to kill numerous enemies at once. There are also options for enemy colours, including shields and weak points, meaning those who are colour-blind can alter Boomerang X’s visual look.

Boomerang X doesn’t overstay its welcome. Clocking in at around 3-4 hours for a full run-through of its story mode, it feels like just the right length for how fast-paced and intense the gameplay can be. A new game plus mode adds additional enemies to the game’s encounters, introducing many of the game’s late-game monsters much earlier, on the flip side, this mode lets you take advantage of all your skills and familiarity to deal with these threats, which was more than enough reason to jump back in.

Boomerang X may well be one of the best FPS games to release this year. The way the game controls, through to enemy variety and the world itself is perfectly crafted. Every nook and cranny is designed with a purpose, and no element of the game is there for the sake of it. DANG! created one of the most enjoyable gaming experiences so far this year, and in doing so proved that boomerangs are actually pretty cool.

Boomerang X is like an exhilarating theme park ride that I just want to keep getting back on, over and over again. Incredibly tight combat, a fluid movement system and unique enemies all pave the way for one of the 2021’s better FPS experiences.