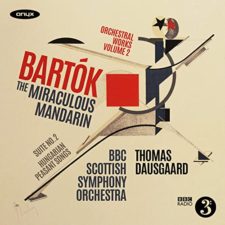 Complete recordings of Bartók’s alternately spooky and violent ballet The Miraculous Mandarin have become almost as common as those of its proximate inspiration, Stravinsky’s Rite of Spring. It’s no longer unusual to hear even “second tier” orchestras play the work splendidly, and aside from a certain lack of projection in the woodwind section (most evident during the wild “chase” fugue), such is the case here.

Dausgaard leads a mean and lean performance, capturing the music’s anger and menace quite well from the opening traffic jam on. The solo clarinet’s “decoy games” have the right seductive atmosphere, and the various attempts to murder the Mandarin in the work’s later stages never drag. Are there more powerful and virtuosic versions out there from the likes of Boulez or Chailly? Yes, of course there are; but this is entirely recommendable as it stands.

The couplings make the disc ever more appealing. The Second Suite is still a relative rarity, but it’s a major work in four big movements, symphonically proportioned. It plays for about thirty minutes and reveals Bartók as having fully assimilated his Hungarian folk music roots, but on the verge of something bigger. This performance easily holds its own against anything currently available, while the Hungarian Peasant Songs (for orchestra) fill out this very appealing program. Warmly natural sonics let the music speak with the necessary color and impact. By any standard this is a fine release, and the total package elevates it well above the ordinary.