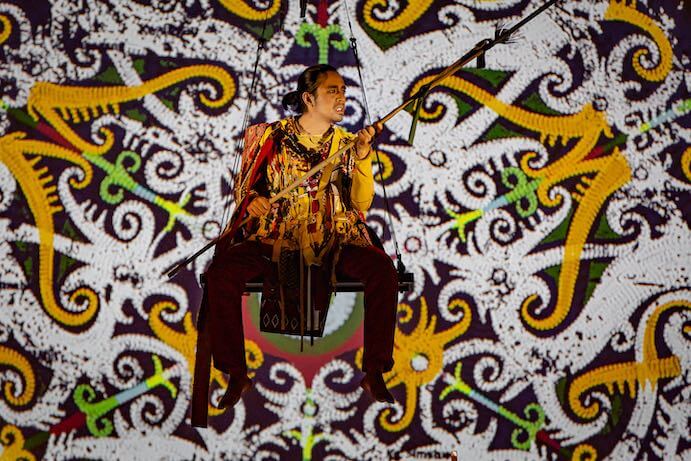 The idea for Ine Aya’ – voice from a fading forest sparked off at a chance meeting between Indonesian composer Nursalim Yadi Anugerah and Dutch librettist and director Miranda Lakerveld in 2019. In his music, Anugerah expresses his concern for the ongoing deforestation of his native Kalimantan (Borneo) and draws inspiration from Takna’ Lawe’, the oral poetry of the Indigenous Kayan people. Lakerveld wanted to address the abuse of natural resources, as told from the mythology of Richard Wagner’s Der Ring des Nibelungen. The resulting production premiered in Muziekgebouw aan ’t IJ Amsterdam on 9 June 2021, as part of the Holland Festival.

In both the Nordic and Kayan mythology, a tree of life plays a central role. It harbours all the wisdom of the world and will cause doom when it is damaged. In both epics, a god wants to steal its power (Wotan/Hingaan Jaan), while a woman tries to protect it (Erda/Ine Aya’). In their opera, Anugerah and Lakerveld artfully weave the two stories together. When Wotan intrudes upon the tree, Ine Aya’ makes it grow so fast its branches encapsulate him. But due to the struggle, the tree loses its energy and slowly dies. Two large discs filled the stage, one on the floor, the other standing up, like a gigantic unfolded powder box. The Balaan Tumaan ensemble, playing Indigenous instruments, were seated to the right. Two narrators who sang and played the sape (a Kayan type of guitar) were seated to the left; the four main characters circled around or on the disc. Apart from Wotan (the sonorous baritone Rolfe Dauz) and Ine Aya’ (the sparkling soprano Frisna Virginia), the main characters include Lalang Buko/Brünnhilde (the luminous soprano Bernadeta Astari) and Lawe’/Siegfried (the graceful dancer Art Srisayam), who represent the younger generation trying to ward off further destruction.

The libretto mingles texts from Takna’ Lawe’ with verses from the Ring, and the score combines Western and Kayan music. Monodic, ritualistic chant from Takna’ Lawe’ accompanied by stamping feet, gongs, marimba, sape, and kaldi (a mouth organ comparable to the Chinese sheng) is cleverly interwoven with soaring Romantic melodies; even Wagner’s leitmotifs mix well with the repetitive patterns from the folk instruments. A few times, harmonies clash as the ensemble responds to operatic solos a quarter tone apart, perhaps to remind us of the disastrous effects Western colonialism still has on the East.

By presenting Ine Aya’ as a mythical story told by the Kayan, Lakerveld and Anugerah create an epic yet intimate atmosphere. The four protagonists invite us to ‘come and listen’, drawing us into the action. Clad in costumes resembling the vivid dress of the Kayan, they entered the hall from the back in slow motion to a buzzing electronic sound, as from a machine in the distance. Their flexed knees, bent torsos, and uplifting arms were reminiscent of the elegant court dances of Indonesia, while their outstretched hands seemingly bade us to join in their ceremonious chant – as did the narrators and musicians, who repeatedly formed a chorus along with the soloists.

Projections on the two globes illustrated the development of the story. At first they showed a clear star-spangled blue, but gradually, colourful intricate patterns evolved that emanated strength and balance. After Wotan’s intrusion and ensuing incarceration, its surface grew smaller, the beautiful designs being eaten away by black spots. Revolving texts appeared on the outer edges, relating cause and course of the deforestation: ‘1971, first logging;’ ‘1980, birth of national environmental movement;’ ‘1994, Unilever invents palm oil for industrial use;’ ‘1997, first forest fires.’ Strangely enough, the combination of epic story and mundane facts made the emotional impact even more poignant. Impressed and moved, I wanted to start clapping but then the show went on. At last, Lawe’/Siegfried and Lalang Buko/Brünnhilde restored order in a forced happy ending that seemed to undermine the weight of this environmental catastrophe. Concluding the work some 20 minutes sooner might have kept the audience captivated from start to finish.

Nevertheless, Anugerah and Lakerveld have successfully combined Eastern and Western musical and dramatic traditions on a basis of parity. Ine Aya’ is a powerful plea for cooperation instead of exploitation — the urgent voice of this fading forest deserves to be heard in all its luscious splendour.