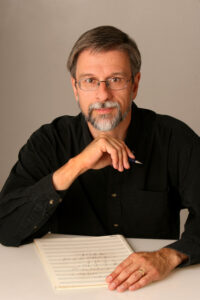 James Primosch, a dear friend and colleague of mine and one of the finest composers of his generation, passed away on April 26, 2021 at age 64, from complications of pancreatic cancer.

Jim was born in 1956 in Cleveland, OH. He studied at Cleveland State University, the University of Pennsylvania (where he joined the composition faculty in 1988), and Columbia University. His principal teachers included Mario Davidovsky, George Crumb, and Richard Wernick. Among the many awards and honors Jim garnered over the years are prizes from the American Academy of Arts and Letters, a Guggenheim Fellowship, a grant from the National Endowment for the Arts, the Stoeger Prize of the Chamber Music Society of Lincoln Center, and a fellowship to the Tanglewood Music Center, where he studied with John Harbison. Most recently he was the recipient of yet another prestigious honor from the American Academy of Arts and Letters, the 2020 Virgil Thomson Award in Vocal Music.

I first met Jim in 1982, when I arrived at Columbia University to begin my doctoral studies. He was one of the first people I met in New York City. He was working in the office of the Dean of the School of the Arts, under the auspices of which the DMA program in composition operated. Jim was very welcoming and helpful as I strove to get my bearings in my new surroundings. I remember us going to many concerts and listening to a lot of music together, along with our other colleagues, and discussing what we were writing and hearing. Jim’s music already was extremely impressive and very technically assured, as well as colorful, vivid, and dramatic. At that time, like many of us at Columbia in those days, he was absorbing the best of the modernist tradition, including the works of Martino, Carter, and Berio, as well as the innovations in electronic music of our teacher Davidovsky, and he already was producing mature works such as Icons, for clarinet, piano, and electronic sounds, that demonstrated how well he was assimilating these influences and yet bringing the strength of his own personality to bear. The music of Mahler was an important early influence for Jim, as it had been for his previous mentor, George Crumb, and like Crumb, Jim was beginning to find his way toward a synthesis of seemingly disparate musical elements. Two things were crucial to this stage of his growth: first, and I believe most importantly, was his grounding in his Catholic faith, described by his friend, colleague and one-time teacher John Harbison, as “very strong and yet questioning.” Many of Jim’s earliest musical experiences were in the church, where he played for masses as a young teenager, and later wrote congregational music for worship communities of which he was a part for the rest of his life.

This led to the second crucial thing: through his love of (and excellent taste in) poetry, particularly that of a devotional nature — George Herbert, John Donne, Gerard Manley Hopkins, Denise Levertov, Annie Dillard — he fully developed the lyrical side of his art. Though he did not initially think of himself as a composer of vocal music, he became a consummate writer of songs and choral works, as he set the poetry that meant so much to him — indeed, that fed him as an artist. He wrote very sophisticated music for some of the best professional singers and instrumentalists, but never lost touch with the simpler yet no less profound experiences he had with congregational singing and corporate worship.

And that lyricism remained even when he was composing purely instrumental works with no obvious extramusical elements. One of my favorite examples is his Piano Quintet from 1996, which he performed and recorded with the Cavani String Quartet. To me this illustrates perfectly how all the influences that shaped his musical language not only coexist but cohere: the spikiness of his early explorations of modernism in the first movement; the light and limpid scherzo, with its rhythmic suppleness and a harmonic language that subtly and seamlessly ­begins to move towards a more tonal orientation; and the rhapsodic variations of “Sometimes I Feel Like a Motherless Child,” which make explicit another element I have not yet mentioned: Jim’s love of playing and listening to jazz. Even in the more angular idioms of the first two movements, there are hints of jazz already latent in the harmony. The “Allegro Shuffle” finale makes this even more overt in the most delightful manner: it captures Jim’s often sly (but just as often gentle) sense of humor.

Two of his finest recent works for chorus, Mass for the Day of St. Thomas Didymus, essentially a troped mass setting that interweaves Denise Levertov’s poetry with the traditional Greek and Latin texts of the Ordinary, and Carthage, with words by Marilynne Robinson, were written for and premiered by The Crossing, an amazing Philadelphia-based professional choral ensemble conducted by Donald Nally. The music and the ensemble seem truly made for each other. Jim achieved in these two works a degree of freedom of movement as a composer that can only be had by dint of years of preparation and honing of technique. The virtuosity of the compositions and that of the performances are perfectly matched, and Jim’s harmonic and melodic invention take flight as they were meant to.

Jim was an extraordinary composer, teacher, and pianist, a keen and articulate observer and writer, and an extraordinarily generous colleague. He was one of the finest composers I’ve ever known or ever hope to know, and a wonderful friend. Some of the best times I had with him were at dinners in Manhattan, usually before a concert. The last of those was in January of 2020, at Il Violino, a favorite restaurant of his. He was about to go to the Metropolitan Opera to see the latest production of Wozzeck. I’m so grateful we got to have that dinner (and all the ones that preceded it). On the day that he died (though I didn’t know he was gone until the day after), it was my honor to present some of his music in my Undergraduate Form and Analysis course at Manhattan School of Music (something I’d planned to do for a while), including the Piano Quintet and Carthage. It made me happy to introduce his work to a group of younger composers who were not familiar with it, and as I thought and hoped they might, they responded to the honesty, commitment to excellence, and integrity his music exemplifies.

He truly believed in and embodied the words of his teacher George Crumb: “Music might be defined as a system of proportions in the service of a spiritual impulse.” Rest well, Jim.