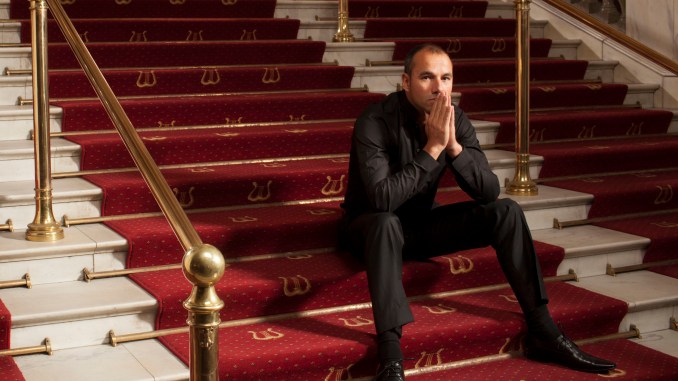 This month, the Melbourne Symphony Orchestra will perform John Adams’ dynamic and breathtaking Harmonielehre under the baton of Dutch-Maltese conductor Lawrence Renes. As something of an Adams connoisseur, Lawrence has championed his music for more than a quarter of a century after first being exposed to the minimalist composer through his studies under Edo de Waart (who premiered Harmonielehre in 1985 with the San Francisco Symphony).

When asked why he has spent so much of his professional life conducting the works of Adams, Lawrence’s response is simple: “I just think it’s great music.”

“Most of John’s works are up there with the great masterpieces,” Lawrence says.

“There are composers who create something technically very brilliant, but who have very little to say. For me, the fact that John has so much to say in his music makes it very special and very dear to me.”

Lawrence is certain that Adams’ music will be remembered as “a very valuable contribution to humanity that helps us understand ourselves and the world we live in better”.

As we talk, it is clear Lawrence has a special and personal connection with Adams himself. He gave the United Kingdom premiere of Adams’ opera Doctor Atomic, also conducting its first commercial recording. He refers to the Grammy Award and Pulitzer Prize-winning composer only on a first name basis as “John”; the two have worked together so intimately over the years that a natural friendship emerged, making the upcoming performance all the more special.

I myself am no Adams expert, although I have often enjoyed listening to his early works such as China Gates and Shaker Loops, which tend to be more distinctly minimalist and repetitive in style. While this is how many people know Adams, Lawrence believes it is a reductionist view to think of John Adams only in terms of minimalism. In his opinion, Adams is so much more than that.

“John’s music is rooted in minimalism, but he took it in very different directions from people like Terry Riley or Philip Glass. For me, it is not ‘minimal music’. It is maximal music: there is so much in it,” Lawrence feels.

“He developed his own language with it, and what I find absolutely amazing is the whole range of emotions that he’s able to catch within this style. Ultimately, that’s what music is about – communicating emotions or concepts or ideas – and Adams does that so brilliantly.

“The technique with which he does that becomes secondary to what he conveys. With the minimalist tradition, the objective was rhythm and harmony. In John’s work, it is not the objective – because the musical content is always the objective.”

The name of the rarely performed piece Lawrence will present with the MSO is a point of interest in itself. Harmonielehre is named after Arnold Schoenberg’s famous harmony textbook, which re-emphasised the place of tonality in modern composition. When I ask Lawrence how this is reflected in the music, he tells me that while the harmony is interesting and important, its function is always supportive of the emotional content.

The whole piece features a sort of battle between the keys of E minor and E flat major, with the latter eventually reigning supreme. As interesting as the harmony and musical language is, it serves mostly to have a reaffirming and satisfying victory in the piece’s conclusion.

“When the final 50 bars of Harmonielehre plays, you come to this glorious harmony that is so life-affirming. Harmony plays a big role in this piece but always supporting the emotions.”

Perhaps what is even more phenomenal about Adams’ piece is the source of inspiration, which includes surrealist dreams the composer had shortly after moving to San Francisco.

The first movement represents a dream in which the composer saw an oil tanker taking flight from water like a rocket. It supports Lawrence’s theory that Adams can represent ideas and concepts in his music that cannot be expressed in words.

“He was very inspired in his dream by all the oxidised rust colours on the bottom of the boats,” Lawrence elaborates.

“The energy and the rhythm part represents that huge force of the ship taking off, but all the colours come from the bottom of the boat.

“It is mind-boggling to be able to express that in music, but the product is so beautiful with rich copper tones.”

The third movement is perhaps even more bizarre. It comes from a dream where Adams’ infant daughter was flying through the universe on the shoulder of a medieval mystic philosopher. To imagine this vision against the aural backdrop of the beautiful and whimsical movement is quite a special experience.

For Adams, all of this marks the end of a period of writer’s block that lasted for 18 months. As I learn this, I can’t help but draw parallels between Adams’ creative stagnation and the global stagnation of the past 18 months.

When I next listen to the piece, it feels poignantly hopeful.

Lawrence acknowledges it can be hard to get people into the concert hall who are lesser-versed in classical music, and may not recognise the name John Adams. But the conductor’s support for this music is so passionate and unwavering that I think anyone who could see Lawrence talk about Adams would definitely buy a ticket.

As Lawrence says, “come and you will be overwhelmed by how brilliant and fantastic this piece is”.

“It’s like if you go to a fabulous restaurant and you don’t know how they cooked the food, but you can just tell that it’s really great. And that’s the thing with greatness: everyone in this world subconsciously understands and recognises it.”

This will be the thirteenth orchestra with which Lawrence has performed this piece. He insists a few times throughout our conversation just how challenging the piece is in terms of technical difficulty. He doesn’t have any concerns about how the MSO will handle it: they are, as he puts it, “a fabulous orchestra and technically so brilliant”, which will make their performance of this special piece all the more magnificent.

“It feels like a liberation. Audiences feel liberated at the end of the piece. It’s a magnificent experience. Wherever I’ve done it – Asia, United States, Europe – it elicits the same enthusiastic response.”