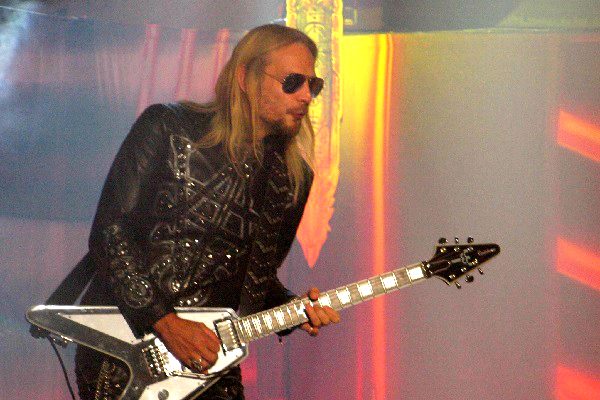 Now, Faulkner is speaking out and thanking fans for their support. He also expressed how grateful he is to be healthy enough to even write a message to his fans, following the health scare. Faulkner says his doctor calls his condition an “aortic aneurysm and complete aortic dissection.”

Faulkner’s note is as follows:

Maniacs… I’ve always been grateful for the opportunities I’ve been presented with. I’ve always considered myself THE most fortunate man ever – to be able to play my favourite music – with my favourite band – to my favourite people around the world…

As I watch footage from the Louder Than Life Festival in Kentucky, I can see in my face the confusion and anguish I was feeling whilst playing ‘Painkiller’ as my aorta ruptured and started to spill blood into my chest cavity….

I was having what my doctor called an aortic aneurysm and complete aortic dissection.

From what I’ve been told by my surgeon, people with this don’t usually make it to the hospital alive…..

I was taken to nearby Rudd Heart & Lung Center and quickly went into what turned out to be a 10 ½ hour emergency open heart surgery.

Five parts of my chest were replaced with mechanical components…..I’m literally made of metal now….

It could have all ended so differently – we only had an hours set that night due to Metallica’s performance after us – and it does cross my mind if it was a full set, would I have played until total collapse…? If it hadn’t happened in such a high adrenaline situation would my body have been able to keep going long enough to reach the hospital…?

The amazing Heart & Lung Center was 4 miles away from the gig site – if it had been further away……..

We can always drive ourselves crazy with these things but I’m still alive thankfully. Whatever the circumstances, when watching that footage, the truth is, knowing what I know now, I see a dying man…..

I’ve been moved to tears and humbled by friends, family, my fantastic band, crew and management and also you guys sending me videos and messages of love and support during the last week – I thank you all so much and although I have a recovery road ahead of me, as soon as I’m able to get up and running again, you’ll be the first to know and we’ll get back out there delivering the goods for you all….!

One last thing maniacs, this came totally out of the blue for me – no history of a bad heart, no clogged arteries etc…my point is I don’t even have high cholesterol and this could’ve been the end for me. If you can get yourselves checked – do it for me please……

Lots of love and see you down the front again soon….

This is from our strong falcon – he will be flying high again just as soon as he is able….

A few weeks before his health issues surfaced, Faulkner spoke with Audio Ink Radio about how much it meant to him to be able to perform live again. He described the band’s summer 2021 Bloodstock performance in the U.S. as being an emotional experience.

“Just to be up there again, playing live music to 20,000-plus maniacs. I mean, it was emotional,” he said. “You can imagine, all that uncertainty of the last year and a half or whatever it has been now. Everyone- fans and bands alike. Everyone was there in a field with their horns in the air, and it was just an incredibly emotional experience on many levels. From my point of view, I have a pair of mirror sunglasses on, on stage, and it was lucky that night, because between us, I shed a little bit of an emotional tear. It was just a lot. You know what I mean? So it was a celebration and hopefully a sign of things to come.”