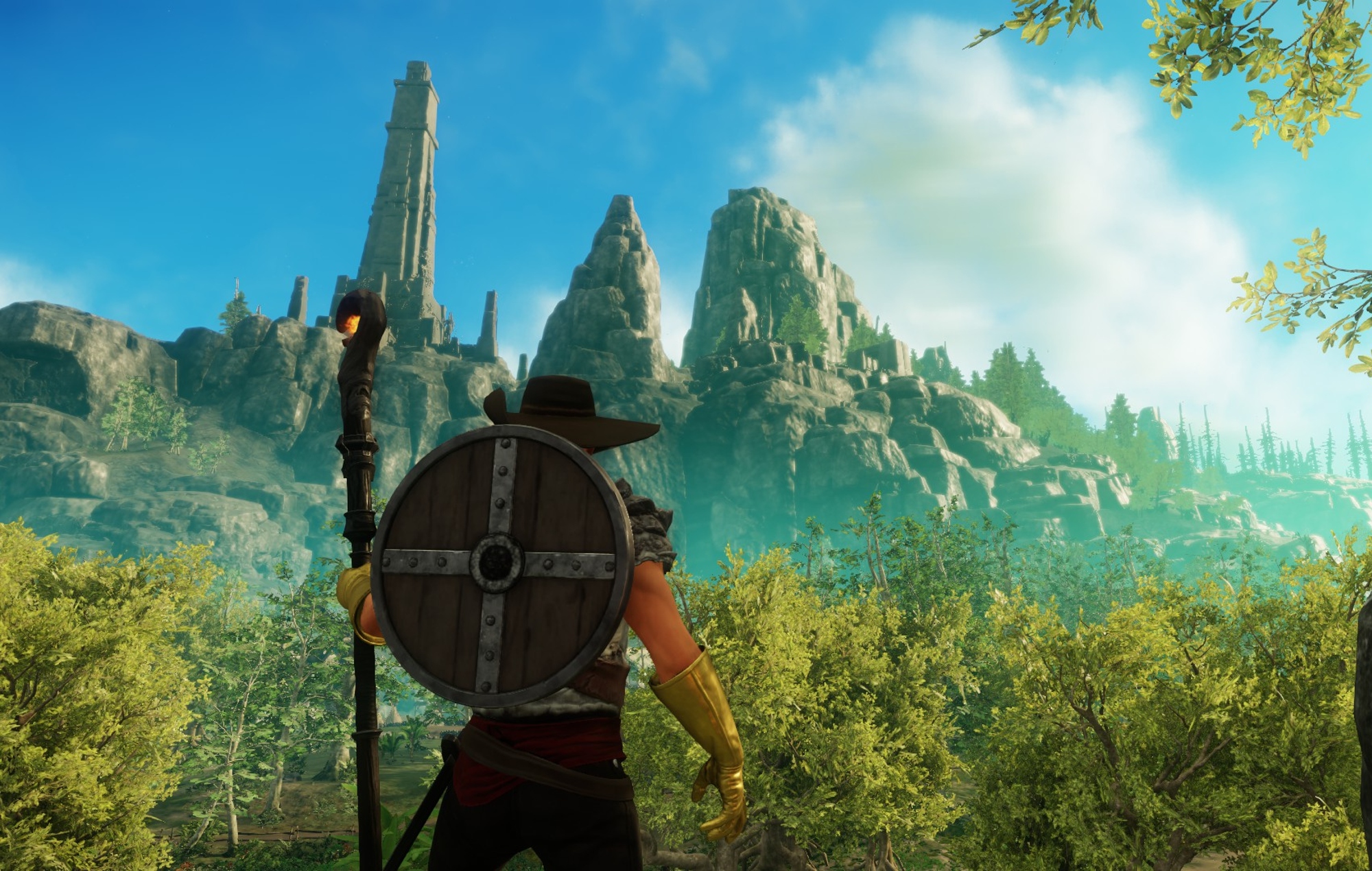 New World is a bit of an oddity. It’s an MMO (massively multiplayer online) without classes, with a hard focus on crafting and biffing your way across an island set in the fantasy-warped 1700s. On this island, you’ll take on a variety of monsters and – if you fancy it – players that have aligned themselves with whichever of the three factions you haven’t picked.

In true MMO style, your character gets stronger, crafts better and accumulates more stuff as you progress. Here, you start out scratching along the beach looking for flint and feathers for arrows. 40 hours later, you’ll find yourself returning to your home city and trying to decide which bookshelf you want for your house in Cutlass Keys.

MMOs have, if you ignore the rampant success of Final Fantasy 14 and the die-hard fans gripping onto the ailing World Of Warcraft, fallen somewhat out of vogue in recent years. The genre is unpopular enough that, honestly, launching a brand new live MMO (massively multiplayer online) game in 2021 feels like an exercise in futility. Still, New World, which is Amazon’s first launched game – if you skip the released, unreleased, delayed and ultimately cancelled Crucible – gives a pretty good account of itself.

Of course, reviewing an MMO is pretty futile. The launch of any game in the genre marks a mere foundation, and you would have better luck judging how elegantly the tide rolls in – it is, after all, going to roll right back out again before returning as an entirely different beast. All I can really offer is that the game feels good to play right now. Even when I’m trudging around the map – seriously, Jeff Bezos can use Amazon money to fly a cock-rocket to the moon but they can’t add a mount to let me walk from Hermit’s Bend to whatever godforsaken cave I have to clear out next? – things feel vibrant and interesting.

Part of this is that new MMO smell, which means there are constantly players everywhere, fighting me for resources, reviving me when I get killed and, sometimes, dancing naked on top of every high point. The world feels alive, and for a game that will require you to spend a lot of energy hunting animals, mining rocks and cutting down trees, the way the resource nodes populate the world is excellent – if you see a tree and you have the required skill you can cut it down, pretty much every piece of foliage can be picked up, and you can skin just about any animal, too.

If you’re not that into gathering my first response would be to say that this isn’t the game for you, honestly. Several hours of my playtime have seen me chasing wolves around to skin them so that I could be better at skinning and skin some other slightly tougher wolves in a different area. New World is a game about crafting, first and foremost, and the only way to get the money and materials you’ll need to explore that system will involve you getting out there and finding them. Everything from the health potions you drink to the ammunition you fire can (and will) be crafted, so it’s a huge part of the game.

Combat is fluid and tight, and doesn’t seem impacted by the fact there are 2000 people on each server. The player vs player combat is quite tight, although it’s hard to work out when you should block as the attacks aren’t as well telegraphed as the PvE encounters. Regardless, there’s a strong level of connection that I don’t have from playing any other MMO – except maybe the long-forgotten DC Universe Online.

Instead of actual classes you just pick a weapon you like and fit the role defined by that: these roles are somewhat ill-defined though, and it’s one of the game’s biggest weaknesses. I think I might be responsible for crowd control with my spear, but it’s not really listed anywhere, and outside of the clearly defined healing role (got a life staff? You’re a healer) and the tank (wearing plate mail? You’re a tank) it can be a little vague, and as a result I’ve just played with the things that I enjoy.

A real strength is they all feel meaningfully different in play. On paper you might not think there’s a big difference between a bow and a musket, but the bow functions as a lower damage option giving you a ton of mobility options, while the musket hits hard but locks you in place, with a secondary tree that lets you plant traps to screw with enemies. Although I originally had a flirtation with the powerful war hammer and the several status effects you can dish out, I settled on a spear and musket combo, which allows me to zone enemies while dishing out tons of damage.

The heartbeat of the game is the PvP, which is optional and basically consists of a huge world-level brawl between three different factions, with you pledging your loyalty early on and then fighting everyone who doesn’t swear fealty to your faction. Territories can be controlled by individual companies (think Guilds) within a faction, letting all of the factions benefit. This involves huge wars with mounted weapons, but also just big brawls and scrappy fights. Players can go prone to make the name above their head invisible, meaning you can get easily ambushed, something you discover for the first time after 20 Covenant troops stand up at once and beat you to death.

However, despite how heavily the game is weighted towards it, I’m happy enough with PvP turned off, doing my own thing and helping out with the occasional big PvP moment. I’m not alone in that, and for those of us who prefer to play nicely with others, there are instances. These instances are standard, and familiar to anyone who has played an MMO before – they’re a dungeon full of more dangerous monsters, who drop better loot. In New World, these are engaging and fun encounters that are worth doing, although I’ve only fought through the first two at this stage.

The multiple elements of New World come together well, for the whole – and I haven’t even talked about things like buying homes, or the fact that every settlement has individual tax rates for crafting, selling to the player market, and buying property, because I haven’t had enough time with the game to really examine the long-term economic bits. For now, crafting, questing, fighting and looting are all very satisfying, but I sure wish there was a way to move a bit faster. Oh, and did I mention the jumping was shit?

In New World, Amazon finally has the hit it has been chasing. However, as an MMO – with a one-time entry fee – the key part is going to be if they stick around and treat the community well with thoughtful additions, instead of asking people to shell out on pages upon pages of cosmetics. The foundation is strong, and if nothing else, it feels good to batter things with a spear.