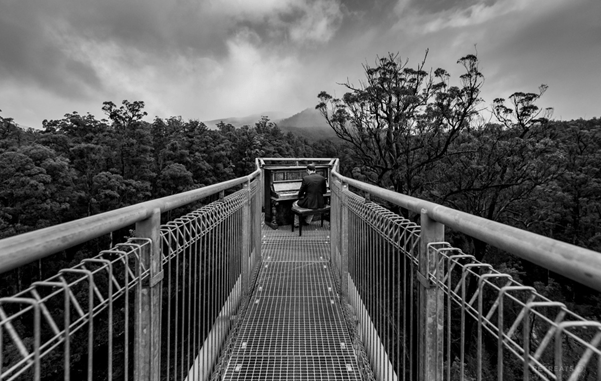 Where do you go to hear the sounds of a piano? In the concert hall? In the shopping centre? In a jazz bar?

You’re unlikely to hear someone play the piano when you’re surrounded by nature. (After all, it is a big and heavy instrument to carry around outside…)

But the weight of this instrument isn’t stopping pianist Kelvin Smith from playing it in some of the most beautiful places of Tasmania – in the outdoors.

Armed with his vintage piano, a weatherproof trailer, and endless patience, Kelvin is sharing music with his local community.

Hi Kelvin! So lovely to chat with you today. You have a goal to play music in beautiful places around the world – what inspired you to pursue this goal?

I have always loved the outdoors, especially mountains, beaches, and rivers. I spent many nights camping as a child, and would love just watching the sunrise or sunset, and watching the stars on a clear night.

I’d always had something of a dream to play the piano in beautiful places, and I’d only really just begun to realise this dream when the COVID-19 pandemic started.

I played in a few places in late-2019, but then as the mood of our communities dampened, I became aware of the need to simply put a smile on people’s faces. This need spurred me on.

Walk us through the logistics. How do you organise to get a piano in a particular spot, often in the middle of the mountains or the beaches?

The logistics of playing in each place are many and varied. Some people ask me to play on their property, so it’s just a matter of driving to the site, lifting my piano onto my trolley, and wheeling it to the desired location. But some locations are government property and require all manner of permits, WHS plans, authorisations, COVID-safe plans, and insurances. The paperwork is often the hardest part of getting the piano onsite!

Also, after about six months of risking Tasmanian weather as I transported my piano, I received a grant from Hobart City Council, which enabled me to get a weatherproof trailer. This enabled me much greater freedom to play!

Wow! And hopefully this freedom will allow you to play in even more places! Where has your piano taken you so far?

In human terms, my piano has taken me to the Huon River, Port Arthur, Tahune Airwalk, Gordon Dam Wall, Constitution Dock, and so many other locations. But there is something magical about being able to play beautiful music in these locations – I get transported to heaven and back each time.

What genres and styles of music do you play when you’re outdoors, and does this change depending on your surroundings?

I’m a contemporary classical pianist through and through. Every now and then, I take a risky dip into classical music, but it’s usually short-lived.

I’m a sucker for contemporary classical piano. I fall in love with every piece that I play, every time that I play it! If I had to choose, Nuvole Bianche (Ludovico Einaudi) or River Flows in You (Yiruma) are pieces that I regularly play.

I’ve also begun writing a few of my own pieces in the hope of playing in some other beautiful locations. Reflections on Dove Lake is probably my favourite self-composed piece, but I’ve also had some fun composing a more traditional sounding piece titled Huon Hymn inspired by Tasmania’s ancient yet living Huon Pine.

What are you hoping this project will achieve?

My initial purpose for this project was really quite simple. I had hoped that people might look at what I’m doing and smile. Actually, I’ve been surprised at how effective it was for this. Often as I’m playing on a beach, pier, or park, people who are very unlikely to enjoy classical music smile as they go by, just because of the absurdity of having a 260kg instrument in that location.

Indeed, you’re bringing music to places that aren’t usually blessed with music – the outdoors. What is something that most people don’t know about playing music outdoors?

I had thought that acoustics would be a nightmare in the outdoors, but I’ve found them to be absolutely awesome! It could be that I most often play near a beach, lake, or river, which gives off that beautiful effect of music carried over the water.

I’m curious — how are you feeling when you’re playing beautiful music in beautiful surroundings?

I so often get entirely lost in the music that I’m playing in these beautiful settings – it’s sometimes overwhelming. I don’t know if I can describe how I feel. Tasmania’s majestic landscape is enough to fill my heart with joy, but then to be allowed to bring my piano along and to play my favourite pieces is just out of this world! Literally, for me it’s heaven.

What would you say to a musician who also loves the outdoors, but perhaps hasn’t had the chance or the opportunity to play in nature?

For me, carting a large piano into these locations took some courage, as people were likely to question my sanity! But even then, the end result has been so personally encouraging. And hey, I even managed to put a few smiles on people’s faces along the way!

Lastly, in an ideal world where there aren’t border closures or any restrictions, where would you like to play the piano?

I dream of playing in so many locations!

Follow Kelvin’s journey across the beautiful outdoors via A Piano of Tasmania (and revel at the beauty of Tasmania while you’re at it).

Thanks for supporting Jessie as she volunteers her time for Australian arts journalism during COVID-19. No amount too much or little 🙂