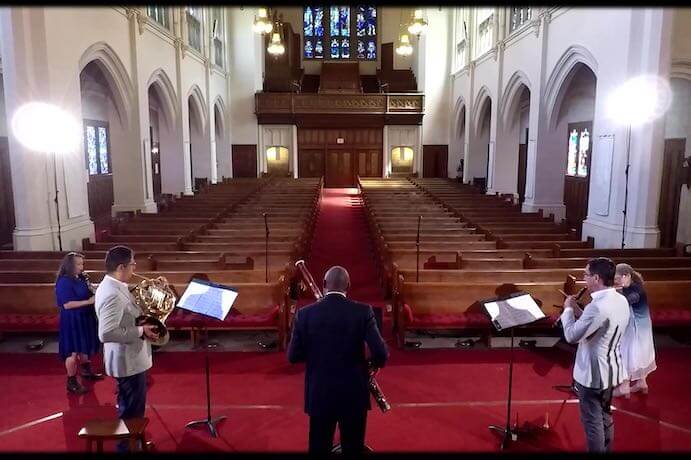 At a roundtable discussion in early June 2021, Quinteto Latino’s founder and director Armando Castellano prompted composer Gabriela Lena Frank to reflect on the future of Latin composers. She started off haltingly: “I feel that this next generation of composers…they’re supposed to go farther than me. They’re supposed to write more music, write better music, expect even more than we expected…sometimes we were just happy to be at the table. But they should expect a certain measure of treatment and opportunity, and they shouldn’t have to work as hard in a certain respect.”

Quinteto Latino has been operating since 2004 as an advocacy group for Latin American music. Along with Castellano (horn), Diane Grubbe (flute), Kyle Bruckmann (oboe), Leslie Tagorda (clarinet), and Shawn Jones (bassoon) travel the Bay Area and beyond to present educational concerts, support and mentor young performers of color, and manage a robust commissioning program. But Quinteto Latino’s centerpiece of the Covid era has been “Seminario:” a series of panels, performances, and discussions culminating in the creation of a “US Latino Agenda for Classical Music.” Quinteto Latino’s June 17, 2021 program hosted by the Americas Society/Council for the Americas exactly expressed this agenda’s sentiments: to represent Latin identity as diverse, multicultural, and multigenerational rather than monolithic. As cutaway video shots locate the quintet at the front of a beautiful church, the stream opens with Gabriela Ortiz’s Puzzle-Tocas (2000). Ortiz writes that the piece was an exercise in heterogeneity, made by “mixing, overlapping, and constant transformation” of thematic fragments from her previous works. But what makes the piece stick together is the ensemble’s performance, a challenge with which the quintet thrives. As intrepid dovetailing scalar figures in the flute and clarinet compete for the listener’s attention, the oboe plays utility man; fluent switches between the upper woodwinds’ lengthier pointed motives and horn and bassoon’s brusque interjections timbrally unify a satisfyingly tumultuous barrage of sound. The ensemble’s realization of Ortiz’s complex series of king-of-the-hill takeovers is decisive, yet always playful.

A title card briefly flashes onscreen to announce the next work, the world premiere by Colombian-born composer Felipe Nieto-Sáchica entitled C U Z A, inspired by the goldwork figures produced by many Indigenous groups in Central and South America and supported by ACF | create, a grant from the American Composers Forum with funds provided by the Jerome Foundation. The composer’s deft orchestration is buoyed by the church’s resonant acoustics, and amplified by Heidi Trefethen’s excellent live audio. At C U Z A’s opening, a plaintive, low-register oboe melody hovers dejectedly above horn and bassoon, but the mood quickly changes to become resolute. Particularly captivating are staunch tutti figures which seem to grow larger as the edges of the tessitura widen dramatically. Through the rest of the piece, a stuttering rhythmic figure comes in and out of focus, driving the ensemble through a series of precisely articulated figures to its close. Last on the program is Gabriela Lena Frank’s Mitos (2019), a charming set of movements exuding several different dramatic characters. The first movement, “Tulpa,” begins with an air of mystery — tense trills and terse punctuations by Castellano’s stopped horn support cascading sets of downward resolutions. Frank’s experience with full orchestral textures is evident in her constant cycling of the ensemble through different pairings, textures, and levels of density. The ensemble responds with gusto to Frank’s pitting of duos against one another, leading to a climactic duel of minor thirds in the third movement, “Nguruvilu.”

Where many advocacy groups are tempted to focus on ephemeral strategies based around ideas like “exposure,” which end with a commission’s premiere, Quinteto Latino seems to be fully invested in creating a range of tangible benefits for their composers. Within days of the concert, Quinteto Latino had created professional, high-fidelity recordings of each piece and posted it to their YouTube account. Their “Adelante” webinar hosted Frank as a panelist, and many videos of the fall’s “Seminario” remain watchable online. And although it was puzzling at the time to be confronted with pieces for which some context could have been helpful — for example, a piece by Gabriela Lena Frank subtitled “suite dramatica para Quinteto Latino (y actores)” performed without either actors or explanation — the quintet succeeded in offering a concert to be understood on its own terms, where the judgements concerning identity fall away, leaving audiences to relish the music itself.