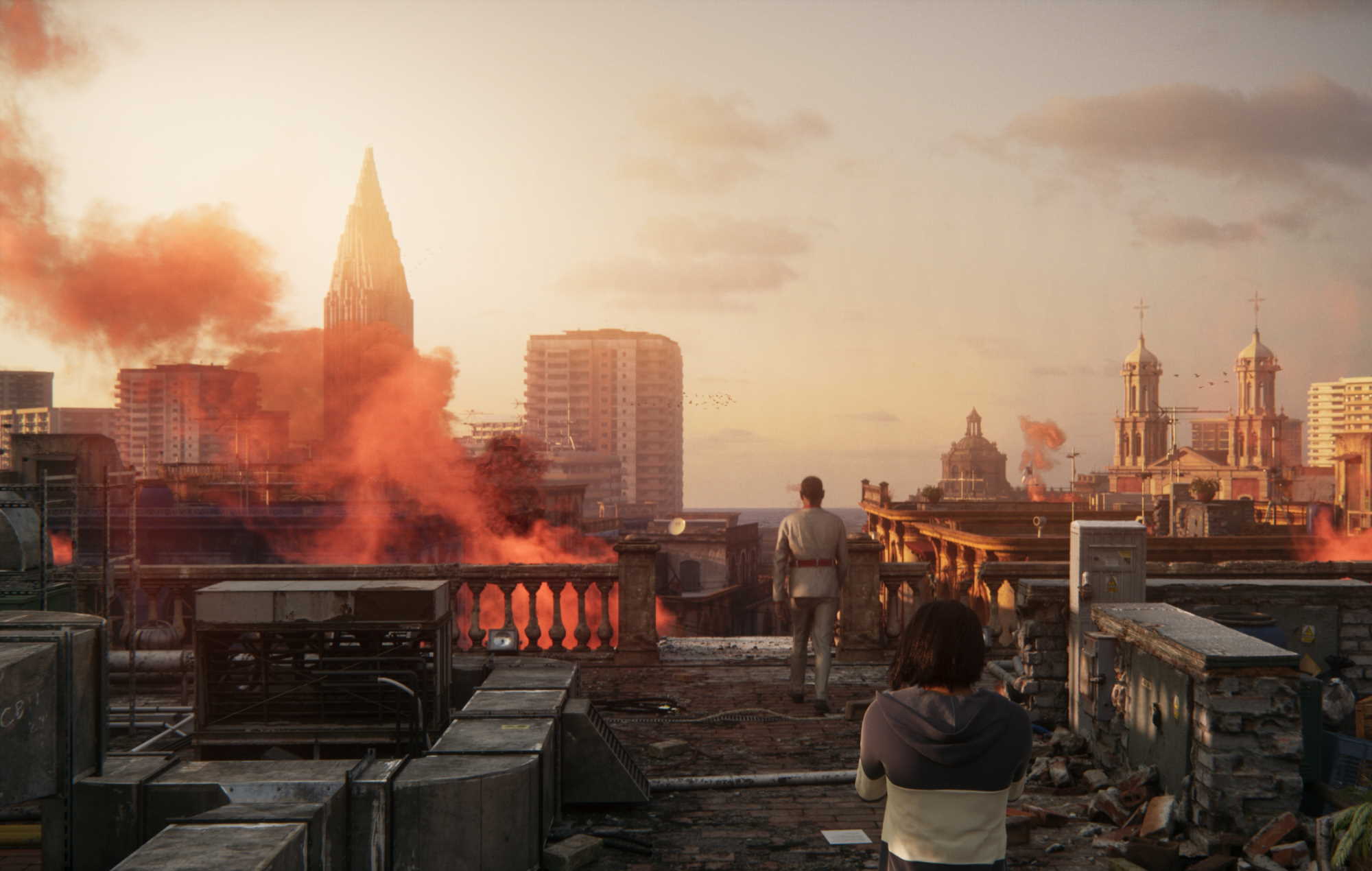 “Ithink music has the power to inspire change,” Far Cry 6 audio director Eduardo Vaisman tells NME, “because we’ve already seen it happen in the world. You’ve got the corridos in the Mexican revolution, there’s the Nueva Trova that inspired people to follow the princiSay what you like about ‘Far Cry 6’, but there’s some real historical authenticity in its musicples of revolution and talk about what revolution achieves in Cuba, and even now you have rappers talking about what’s going on in their neighbourhoods and responding to police activity.”

“Music and art, in general, can put topics on the surface that will inspire and create changes. Music itself can be a catalyst. It can inspire the people that will go out and make changes to the world.”

It’s a well-documented fact that music and revolution often go hand-in-hand; where totalitarian regimes seek to suppress creativity and freedom, musicians and artists become some of the most important voices at street level. In creating a fictional (and interactive) analogue of Cuba in Far Cry 6’s world, Yara, Ubisoft could so easily be making a rod for its own back: the publisher has famously skirted politics and refuses to categorically outline what its actual beliefs are, and centering a game around rebellion and revolution could be myopic, unfocused, and sitting on the political fence. Luckily, Vaisman knows what he wants to do in Yara, then – at least with the game’s audio.

Where better to start understanding the politics of rebellion and resistance than in music? The corrido – a historical ballad name-checked by Vaisman remarkably early in our interview – is considered one of the foremost folk expressions of Mexico’s rural, working-class culture. Nueva Trova, an inherently political and typically progressive style of Cuban music that smashed rock and pop with folk idioms, was similarly name-checked when talking about inspiration for Yara’s aural personality.

Vaisman, it turns out, knows the importance of music as a tool of resistance on a very personal level. “I am from Argentina and from Buenos Aires, and for the first part of my life, I lived under a military dictatorship,” he tells us. “I am bringing those memories to the game, but not in a painful way… more in a way where, as an audio director, I can offer my harvest to the game and take it up a step.”

Perhaps the most important aspect of living under such a regime, in Vaisman’s eyes, is that life goes on – it has to. “From the very beginning of working on Far Cry 6, I had conversations with the team about living in a dictatorship and how important is it that normal life carries on – people keep dancing, people keep dating, and they keep waiting for a better future. It’s not all gloom and doom. On one side, you’ve got the military saying ‘no, don’t move your hips that way’ and on the other, people are saying ‘let’s have fun!’ We are Latino, you know, we have caliente blood.”

Authenticity is important to Vaisman, and correctly communicating the experience of living under a dictatorship (without it coming across as trite and insincere) is no mean feat. “I teamed up with a composer in Argentina for the military marches in Yara, which are 100% inspired by my experiences. I wrote the lyrics to the Yaran anthem, which is a bit of a compilation of different things from Latin American anthems.”

In keeping with the anti-fascist motif that runs like an undercurrent through Far Cry 6’s sonic channels, Vaisman tells us that he translated a version of Bella Ciao – an anti-fascist hymn of freedom and resistance, of which multiple versions are sung internationally – to fit in better with multicultural community of Yara. “I translated a version of the song, but I did it in a more salsa style, inspired by Oscar D’León and Tito Puente – so it’s like traditional salsa.”

Far Cry 6 could so easily have been trite in its representation of the music of the revolution. It could have dialed in a few performances, enabled some lazy stereotypes, and travelled down the culturally-insensitive path so many other shooters have blindly trudged down before. But that would undermine the point, for Vaisman at least, of what the game is trying to achieve.

“I think we captured not only how important music is to places like Yara, but also the oppression of a regime like this,” he explains. “Like the propaganda over a PA system, reminding the people that there’s no gathering of more than three people because they can be read as conspiracists by the government, and telling them that there’s a curfew, that their constitutional rights were removed. All these reminders, things like that, are things that I was reminded of when I was a kid. I think we captured what it was like.”

And it’s not just the tracks you’re going to hear on your radio or the propagandists repeating on the PA systems that make Yara feel so lived-in and genuine, either. Vaisman “aimed to paint the world with a deep Latina and Afro Caribbean rhythms,” and wanted to achieve the fusion of sounds that’s baked into a nation’s identity when you have “the mixture that comes from the old Spanish colonisers with a West African and Yoruba heritage, alongside some elements remaining from the indigenous Taíno people.”

Vaisman has gone out of his way to ensure he’s been using instruments and tools authentic to the area and its people in creating Far Cry 6’s incidental music. As well as tapping into the rich musical ore of Yara’s analogue cultures, Vaisman also looked to more contemporary inspirations, too – you can’t have a revolution rooted entirely in the past, after all. That’s totally opposite to the idea of all-encompassing structural change.

“It’s not just traditional salsa, merengue and things like that – we’re also bringing in things like reggaeton and trap and contemporary Latino pop.” Like myriad games in the series before it, Far Cry 6 will use real-world tracks to complement the player-oriented soundtrack, and to make sure the music the characters in-game could hear (which is called diegetic music, incidentally), the audio team needed to make these real-life tracks fit in Yara just as much as they would in any real world Caribbean location.

“For the music in the cars, the music in the bars, what you’ll hear from the boomboxes on the street, I’ve been picking artists from all across Latin America. And we have [talent from] Argentina, Chile, Colombia, Venezuela, Puerto Rico, Dominican Republic, Brazil, Mexico, and the Latino community from New York as well as Afro-Cuban performers here in Canada. And yeah, I’m happy how it turned out.” It couldn’t be more different from the rural America of Far Cry 5 or the throbbing synthwave of Far Cry 3: Blood Dragon. And – honestly – from what we’ve seen of Far Cry 6 so far, Vaisman has managed to inject more personality into Yara than both those titles put together.

There’s one place in particular that this personality penetrates more than most – where this unabashed enthusiasm and joy that sits like a beating heart of the spark of rebellion shines through the game world and feels like real life. Vaisman noticed, in Far Cry 5, that certain NPCs (or non-player characters, if you prefer) would hum along to the hymns cult leader Joseph Seed had indoctrinated into his flock. “I have to take it further. How can I connect with the player like this?” he asked, when hearing the incidental characters doing this.

“When I’m driving my car, I’m listening to my favourite song and I’m singing at the top of my lungs and out of key. But I’m happy to do it! And I think, how can I connect this to (Far Cry 6 protagonist) Dani Rojas?” The idea hit him like a flash – it was obvious… The main character would sing along to diegetic music in the game, too. They’d like karaoke, they’d engage with music in the world. Because what hot-blooded revolutionary wouldn’t, right?

“If I’m singing – I don’t know – Ricky Martin whilst entering Esperanza, (Yara’s capital city), and I’m shooting through my window? For me, that’s a magic moment.”

Far Cry 6 still has some convincing to do; Ubisoft is reluctant to show the colour of the cards in its hands, and to categorically state what it actually believes in politically. It’s still hard to take Yara at face value, especially given the dubious ethical past of Far Cry as a series. But, if nothing else, it’s reassuring to know that the audio director (and the whole music team at large) have done everything they can to give Yara an authentic, respectful and inherently anti-fascist heart. Viva la revolución.