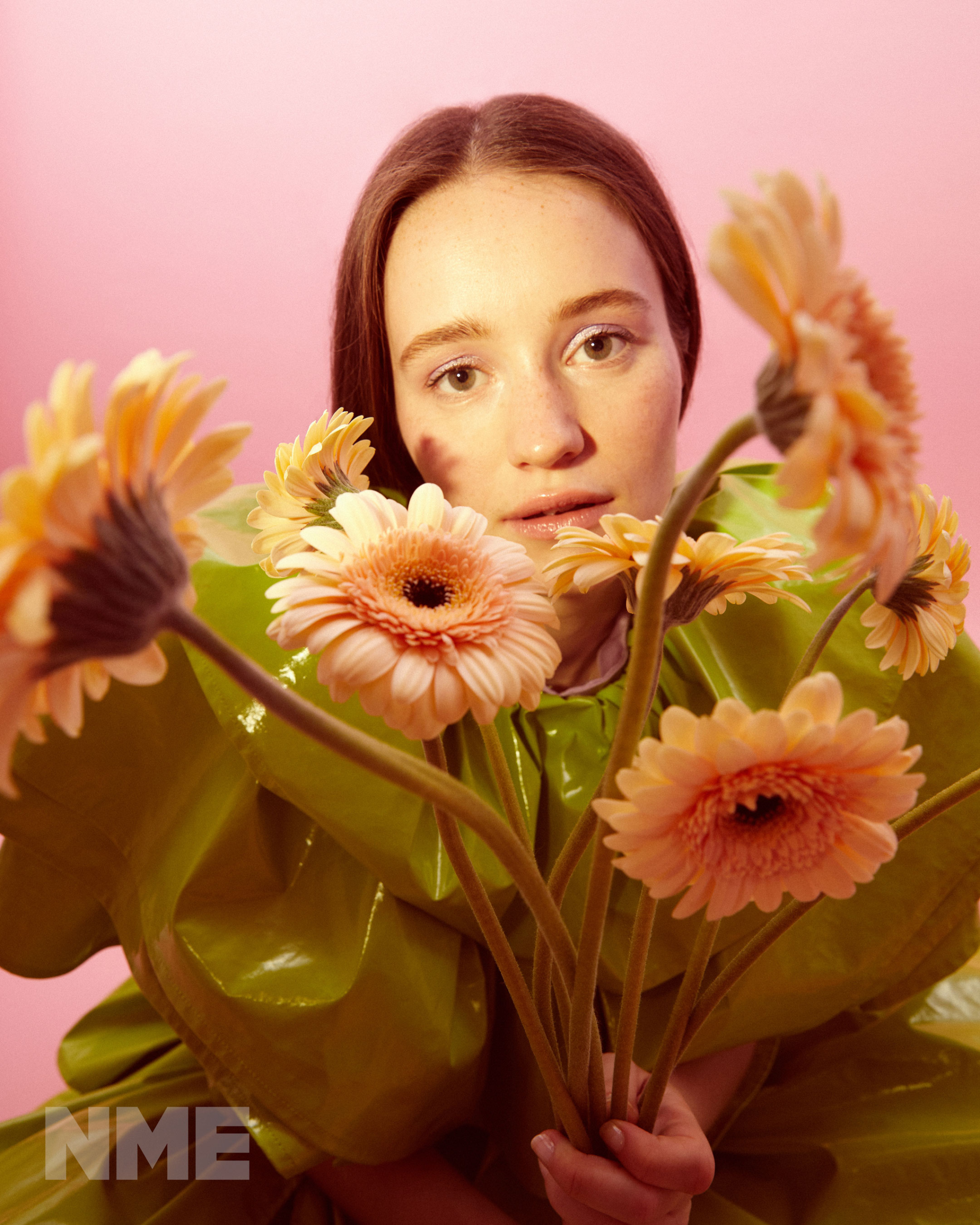 To understand where Sigrid is in 2021, it’s worth comparing and contrasting two key images: the first is the artwork for her 2017 debut single ‘Don’t Kill My Vibe’ and the second for recent single ‘Mirror’, released earlier this summer. In the former, the song’s title is emblazoned on a plain white tee and red jeans, paired with a have-a-go-if-you-think-you’re-hard-enough stare; the song’s lyrics are similarly guarded, a stinging riposte against a controlling male collaborator who felt threatened by Sigrid’s input and talent in an unsuccessful writing session.

But for ‘Mirror’, it’s all change. This time the Norwegian pop star stands tall astride atop a diving board in a flowing pink gown, hands on her hips but with comfort and confidence. It matches the song’s narrative flip, too; instead of grappling with other people’s putdowns, she’s in a celebratory mood. The chorus’s buoyant, direct message – “I love who I see looking at me” – is under-pinned by slick beats and party-starting piano stabs, a far cry from the brooding, skittish drums of ‘Don’t Kill My Vibe’.

“I needed to hear ‘Mirror’ when we wrote it,” she says on a break during her first NME cover shoot in a south-east London studio. “This is an industry of perfection and I want to do as well as I can, but I still need to hear that it’s OK to do your best and that is good enough. I get really paranoid and up in my own head about not being good at something straight away, then I remember ‘Mirror’’s message of: ‘Just love yourself – just have fun with it.’”

She follows her own advice with NME’s snapper; they experiment with various textures and vibrant colours, jumpsuits and dresses – her choices no doubt influenced by a front-row spot at London Fashion Week earlier this year. They also subtly – perhaps deliberately – push back at the expectations of Sigrid as a pop star with a twee ‘girl-next-door’ energy, as seen during live shows and promo around her debut album. The pairing of plain white tees and jeans were a practical choice for Sigrid – it meant she spent less time worrying about her outfits and could hang out with the band and play The Sims backstage, she says. An article in the Financial Times echoed a widespread critical response in suggesting that this “artless” stage show look had been “deliberately created” to show off a level of relatability, instead of its functional purpose.

The criticism stung: “Around that time, it felt like everything was going crazy around me, but to know that no matter what environment that you put me in that I was going to look the same and if I was looking at myself in the mirror I would be like, ‘I know you’. I got confused when I saw in some papers saying, ‘Oh, that’s a cool marketing trick’ – that hurt a little bit. It wasn’t an idea from the marketing team but that was me, I walked into my label and from the first day with the team being like this is what I am comfortable with right now.

“I think being in the spotlight like I have been in for four years makes it more difficult to be accepting of yourself. It’s not natural to be in the spotlight and to have your photos blown up on walls is kind of weird – you can’t turn it off and you are on constantly.”

Following a sleeper hit on Norweigan radio in 2013 – the Neil Young-indebted folk ditty ‘Sun’ – the Ålesund native’s career accelerated when she signed with Island Records in the UK in 2016 – stellar debut EP ‘Don’t Kill My Vibe’ propelled her to win the BBC’s Sound Of critics poll in 2018. The resulting debut album ‘Sucker Punch’ – propelled by gigantic single ‘Strangers’ – enjoyed considerable chart success both in the UK and mainland Europe, and favourable festival slots followed. As NME said in a four-star review of the record, ‘Sucker Punch’ was “a marvellous cap on a two-year campaign that did just about everything right”.

If Sigrid’s modesty had been misread as cynicism, ‘Mirror’ kicks off a new era that sees her shy away from nothing – even the challenge of following up hit singles. It is, perhaps, the only way to navigate the hellish standards currently set for pop stars, particularly women, who are forced to navigate criticism that they’re in a “flop era” if a song or album does not fly immediately. “That pressure to follow-up a hit is always there,” she says. ‘It’s hard to deal with and definitely gets to me sometimes, but it’s a pressure I put on myself as well.”

And ‘Mirror’ is a celebration of the incremental changes we make; rarely do we engage in wholesale makeovers, but full of subtle improvements and recalibrations. ‘Mirror’ is the sound of someone who knows that they belong and to enjoy it while it lasts.

“I was just trying to be honest with myself more than I’ve been before, I always worry about being perceived as ‘cocky’”, she says, air quotes around that final word. “Sometimes that can tip over a bit and that’s when you need to remind yourself that, like, ‘I am good at this’ – I wouldn’t have gotten this far if I didn’t know what I’m doing.”

‘Mirror’ and the remainder of the upcoming second album finds the 24-year-old on spectacularly liberating form. She leans into her love of stadium bands such as Muse and Coldplay, landing at the intersection of rock and pop; it’s decidedly Sigrid with sharp wordplay and tightly constructed songs, but there’s a looseness to her performance and the band she’s assembled to thrash out the songs.

It’s a reflective listen, unsurprisingly, given how she spent the last year. When the pandemic hit in early 2020, she was working in Los Angeles but raced home to spend most of lockdown with her parents and boyfriend in Ålesund, a port town. Initially that period meant that work didn’t seem like an attractive proposition for the first time in a little while, but it gave her time to consider her place in the world.

“I grew up in a very sheltered home and my world was quite small: it was my hometown of 50,000 people and that was it. But touring and seeing the world gives you a perspective of things and I came to realise how much of my identity is in the world outside of Norway,” she says. “I sometimes feel a bit torn between feeling at home in Norway but then also feeling at home in all of cities like London, LA, New York and you just get a bit confused… I have to just come to terms with having homes in several places and that is a beautiful thing.”

“Everyone needs to be held accountable for gender equality at festivals”

She also considered the speed at which she was expected to grow up and take the lead on a full-fledged music career aged just 18, when ‘Sun’ blew up in her home country. “I am very grateful for all of this and I wouldn’t do it any other way but there is definitely some bittersweetness and melancholy in letting go of certain things and who you used to be,” she says.

It’s the kind of wisdom that she can now pass down to friends and collaborators like rising British pop stars such as Griff and Maisie Peters. The former, in particular, has had a similar rise to Sigrid’s: both entered a major label as teenagers and gained early industry accolades and success, but they wanted to make the system work for them and not for it.

“I definitely see parts of myself in Griff a bit, it’s really nice to know there are other girls doing the same thing and we can talk about stuff whenever – it’s a supportive gang,” she says. “Griff and I decided to meet up and write a little bit together recently, which was fun. Of course we wanted to be in the studio and see what happened there, but it was also really nice to hang out and chat about how things are going and how we’re feeling.”

When Sigrid was ready to resume writing her own music last year, she found that space and reflection fed her creativity, something she wasn’t afforded the first time around. “It actually was easier than putting together the first album, where I just didn’t have time to go back and re-do things, songs were written in one or two days in between tours. I got more time to just relax and not release any music so I could properly do the ‘hideaway in a cabin’ type of writing.”

Yet Sigrid also struggled to navigate the lack of performing in the midst of lockdown. Stagecraft had been key not just to her career but her whole identity; she considers herself more a performer than a pop star. In the period surrounding her debut, she’d lept from tiny shows at Brighton’s tastemaking Great Escape new music festival to headline dates at Hammersmith’s 5,000-capacity Eventim Apollo in London, alongside enviable slots at Glastonbury, Latitude and more. Her bold live persona – something she says is at odds with her “introverted” nature – is the type to rope in those squished down the front of crowds as well as the picnic blanket layabouts at the back of main stage fields; support slots at arenas with George Ezra and Maroon 5 no doubt helped.

The dream of returning back to stage inspired the songwriting that followed, she says. “I wanted the new songs to sound live. I always love the way we played the existing songs live, they have this grittier vibe and sound more heavy; I always like telling the band to play the songs harder. They are so good at letting music roam free a bit – that’s something that I wanted to take with me for this record.”

In three weeks, she’ll return to the stage in the UK with a slot on the main stage at Reading and Leeds Festival (Aug 27-29), and teases the possibility of performing new unheard songs, alongside ‘Mirror’. She’s one of the highest-billed women on the line-up, alongside London R&B star Mabel, and agrees that the responsibility to challenge the dominance of all-male headliners (like Reading and Leeds has) is one that falls onto all of us. “I think everyone needs to be held accountable: everyone working at the festivals, the bookers, other male acts to speak up about it,” she says. “I’m lucky to have my job and to play these stages and I never take it for granted… but I also hope that I get booked because I’m good and deliver a good show.”

She’s being modest if she describes her last performance at Reading and Leeds – a mid-afternoon affair in 2018 – as merely ‘good’: it was electrifying. Sigrid stalked the BBC Radio 1 stage with purpose, like a puppeteer gleefully pulling and tweaking with all the strings to see what each reaction garnered, a punter’s pair of flying crutches during ‘Strangers’ a testament to that. Sigrid was buoyant that day, enlivened and encouraged by rap collective Brockhampton’s manic sets that weekend, but she’s still somewhat galled at the boldness of her decision to do part of ‘Strangers’ a capella: “I get a bit embarrassed that I did that… The confidence!”

Perhaps she unknowingly tapped into that ‘Mirror’ ethos – to embrace the imperfections and the jeopardy of live performances, but to trust your instincts and know that not only are you enough – you’re also bloody smashing it. “I feel the most at home when I’m on stage,” she says. It’s the part of my job where there’s a part of myself that comes out when I play live – it’s my superpower. I feel lucky to have that thing where I know that I’m really good at this.”