I’m all too aware that by publicly declaring The Legend of Zelda: Ocarina of Time to be my favourite ever video game, I’m also outing myself as a bit of a basic bitch.

You’d be hard-pressed to think of a much more obvious choice of favourite game, but don’t hold that against it.

The Zelda series’ first foray into the third dimension was a landmark game when it first launched on the N64 in 1998, and along with Super Mario 64 and GoldenEye 007 remains emblematic of Nintendo’s groundbreaking early success with gaming’s biggest ever technological leap.

Iconic dungeon designs (or at least infamous, in the case of the Water Temple), slick controls, and intricate puzzle-solving made Ocarina a quick hit with critics (it remains the top-reviewed game of all time on Metacritic, with 99/100) and a long-lasting fan favourite.

The game was such a success that its influence hung heavy over the franchise for almost two decades, with four 3D Zelda titles following – from Majora’s Mask to the recently remastered Skyward Sword – that have borrowed systems, characters, and core gameplay mechanics wholesale from Ocarina.

It took until 2017’s Breath of the Wild for Nintendo to finally break free and try something new, resulting in a game that feels poised to enjoy the same prolonged influence – even if it could still learn a thing or two from Ocarina’s labyrinthine levels.

I could go on about Ocarina’s influence – how its lock-on system shaped melee combat, the subtler impacts of its context-sensitive controls, even the arguably less positive role it played in driving open-world games to be bigger, grander, and ever more expansive.

But I never fell in love with Ocarina because it was influential. My eight-year-old self didn’t know – and wouldn’t have cared – about any of it. I fell in love with Ocarina because it felt like the first game that opened up a sprawling world filled with life, with charm, with humour and, yes, with more than a little tragedy to cut through it all.

It’s there right from the moment you boot the game up, the camera panning across the expanse of Hyrule Fields in the game’s dreamy title sequence – even if you’ll have to play for an hour or two to break out of the idyllic confines of Kokiri Forest and get there yourself.

Striking as that vista is, it pales in comparison to the characters that call it home. The SNES’s A Link to the Past featured a single dinky village (two, if you count its otherworldly counterpart), but Ocarina packs in plenty. The percussive caverns of Goron City; the serene pools of Zora’s Domain; the subtly sinister Kakariko Village, in which many of the game’s darkest turns lay hidden.

None impressed so much in 1998 as Hyrule Castle Town, a surprisingly small settlement that masks its size with the help of a few disorienting perspective shifts that always leave the sense that there’s more to the town, just off the screen.

Ocarina’s direct sequel Majora’s Mask would go on to perfect what the older game started, shifting its communities to the centre of the game rather than its peripheries, and building complex, interweaving and interpersonal narratives that criss-cross the time loop structure.

But while both games get their emotional buy-in from their towns’ impending dooms, only in Ocarina do you have to bear the weight of its after-effects.

Like so many Zelda games, it explores dual worlds – in this case two timelines, seven years apart, before and after the cataclysmic takeover by big bad Ganondorf.

Around the game’s midway mark, when Link is first frozen in the Temple of Time and emerges, now teenaged, I remember first being struck by the ravaged world: the darkened sky, the town’s crumbling buildings, the hordes of ReDead zombies shambling around its ruins.

But as I settled into this new Hyrule, it was the people in it that began to sit heaviest with me. It’s no mistake that most of the game’s key towns lie empty in the darker timeline, their populations either enslaved, killed, or forced to flee. This Hyrule is made lifeless by quite directly removing most of the characters that first gave it life.

Those that are left are rarely unchanged. Take Malon, the carefree young farm girl who teaches Link to play Epona’s Song as a child. Years later, however, she’s imprisoned on her own ranch by a despotic uncle who’s at least abusive to the ranch’s horses, if not more besides.

Of course, this being a Zelda game, such crises are easily solved – in this case winning a couple of horse races is enough to set things right and restore a little normality to the world. Link nets a sweet horse besides, but it feels almost as important that at least one life in Hyrule is set back on track.

For all the thrills of righting wrongs in Hyrule’s darker variant, I have to admit that when I think back to Ocarina now, a couple decades and a few playthroughs later, it’s usually the game’s first half I get wistful about – the joyous few hours strolling around a world teeming with life, playing as a boy getting to know it at the same time as the player.

One of only a handful of Zelda titles to firmly establish Link as a child – the two timelines have split the sequels, some opting for innocence and others for adolescence – there’s a particular playfulness to the early stages of Ocarina. 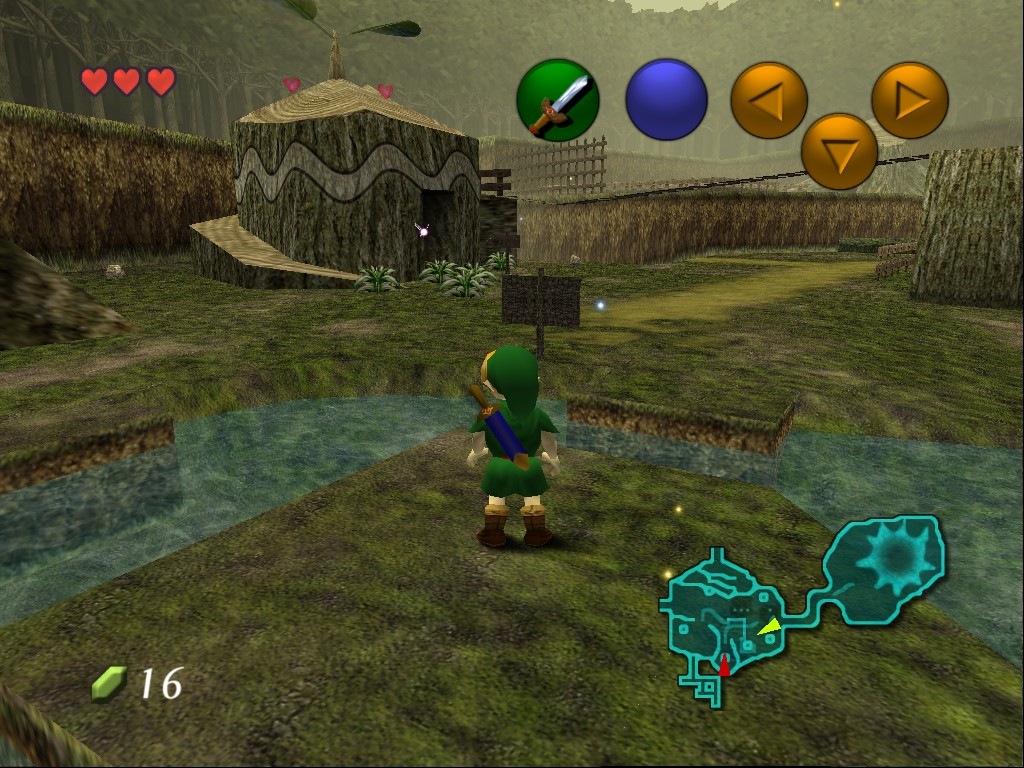 Much as the side characters define the world of Hyrule, it’s clever touches in Link’s character that do much to set its tone. There’s the fact that your primary ranged weapon is a slingshot, a toylike alternative to the bow you adopt later on. There’s Link’s high-pitched grunts and squeals as he navigates a world too big for him by half. Most endearing of all, the fact that the series’ iconic Hylian Shield is here far too large for a young Link, dwarfing his back and forcing him to hunker down into a turtled crouch to even use it.

There’s no mistaking that you’re playing as a child. Perhaps that hits harder for me because I was a child when I first played the game, but even in my 30s I see in it the same charm and playfulness I find in Majora’s Mask, Wind Waker, and many of the 2D Zelda titles, an endearing against-the-odds brand of heroics that’s worlds (or timelines) apart from the gruff sword-clenching that dominates the older Link’s time on screen.

Seeing Hyrule through a child’s eyes, first and foremost, instills a drive to explore that sees you strike out across the fields and through the dungeons, to dig through every nook and cranny of this vibrant world.

And then, having let you fall in love, the game yanks this Hyrule away with one hand, while giving you the power to rescue it with the other.

Countless games ask us to save the world, but all too few give us a reason to. Ocarina lets you love its world – from fairies and fishmen to ghosts and gravediggers – so that it never needs to ask you to save the world.

You already know you need to.

Dominic Preston is the deputy editor of tech site TechAdvisor, and an occasional contributor to NME.