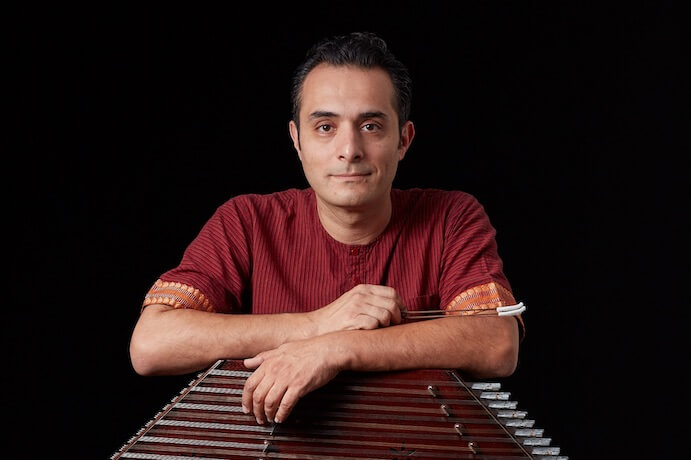 “World Music” as a genre label is, despite the grandiose name, usually diminutive. Its use as a catch-all for everything that doesn’t neatly fit into generic Western classifications reduces diverse traditions down to an overgeneralized and overstuffed bin. It reinforces a dichotomic relationship between “The West” and “The World,” continuing a long history of chauvinism, and the music suffers for it. But when might this title be appropriate?

An ambitious affair, The Voices and Bridges (released July 16, 2021 on Bright Shiny Things), is an eclectic set of tracks unified in purpose. With music composed by Ehsan Matoori and lead vocals by Alireza Ghorbani, the album is a collection of pieces in a multitude of languages (Persian, Spanish, Arabic, English, Turkish, Urdu, Kashmiri and French). In each piece, Ghorbani’s Farsi (Persian) is intermingled with another language, sung by one of the featured vocalists. While each of the tracks display influence from their associated culture, they are all unmistakably projected through the lens of Matoori’s vividly rhythmic and melodic approach to writing.

The impressive vocal cast includes singers from many different traditions underpinned with the through line of Ghorbani’s emotive Farsi singing. The guest vocalists heighten the language changes of each track as the singing styles change dramatically with them. Each vocalist’s performance is powerful, with an immense variety of expression. The ensembles are likewise extremely colorful, featuring a mix of Western instruments and instruments native to the cultures of the languages used, further aiding in the timbral breadth of the album. The recording and mixing of the music feel close, with the percussion especially having an immediacy of presence and clarity that heightens the rhythmically engaging music. One of the standout pieces is Alnesa Mesli (in English: “Women Like Me”), sung by Lebanese vocalist Maya Hobeika with a text by Maram Almesri. The song highlights the suffering and atrocities endured by women, especially in the Middle East. The powerful refrain of “Women like me” is emphasized throughout — the work ends on the final resolution of “Women like me dream of freedom.” This is set in contrast with a lyric ballad sung by Ghorbani as a sort of “conflict,” which is played out between the two. The music here is also some of the strongest of the album: the infectious opening material continually returns, and moments of lush melodic writing for the strings bring them to the forefront.

La Cloche Vide (also with Hobeika) uses a Latin Jazz inspired groove and serves as wonderful foil to some of the heavier tracks of the album with its lively winds, unison horn lines, and fun melodic turns. This is made all the better with the contrast of the following piece, Nil Chashm (feat. Qaiser Nizami), which begins with slow, melancholy waltz-like music between the piano and cello. Soon the voice enters, matching them in tone and bringing the expression to new heights. The music shifts quite suddenly to an up-tempo feel with a complex rhythmic pattern in the percussion. The piece continues to gain momentum before moving towards a dramatic and soaring ending that fades out after it reaching its apex. Another piece of note is The Love Metaphor (feat. Michael Kelly), one of two pieces sung partially in English. It begins with an immediately striking and intriguing idea in the piano layered over with a long modal melody played by clarinets in unison. This track is the most differentiated from the others of the album and has an almost operatic feeling in the English sections, which use text by Shakespeare. Throughout, we move between quicker, lively sections and more poignant, introspective sections with sparse orchestration. This piece heavily features the violin and clarinets, reducing the ensemble down dramatically to just them and percussion (besides the vocalists), a welcome contrast to the denser orchestrations of the previous pieces.

The genre of “World Music” often feels condescending, with its faux awareness barely concealing the underlying fetishistic marketing of exoticism; however, it feels quite fitting in this strikingly colorful album as styles and languages blend into each other and boundaries dissolve. In all, The Voices and Bridges is largely successful in its stated goal. A multinational and multicultural collaboration, the music wears its influences proudly, although with Matoori’s compositional voice clearly heard throughout. I would highly recommend listening with translations of the text at hand, as it adds significant depth to the music. With it, we can see the fundamental purpose of this project: the connections between these widely spread and sometimes conflicting places and peoples, and how they can be fostered into something with beauty.