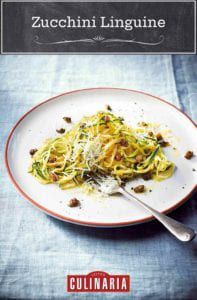 I remember my dad serving spaghetti with steak in his restaurant, and it was always a real treat. I spent nine months working in Tuscany several years ago, and that totally sorted my pasta cravings out. This zucchini linguine recipe is exactly the kind of thing I like to throw together on a weeknight—quick, simple, vegetable-based, and something that uses up produce that I tend to have an abundance of. You can jazz it up with the addition of fresh prawns or serve as a side to a grilled fish dish.–Maria Elia This recipe is full of fresh flavors and takes no time to make, it’s bursting with fresh herbs, salty capers, rich butter, and cheese!

A hard, salty, white cheese made from sheep or goat’s milk, kefalotyri is made in Greece or Cyprus. It’s most popularly used as the cheese in saganaki, the olive oil-fried cheese appetizer. It’s also used grated into pasta, salads, and meat dishes. As it’s a drier cheese, it doesn’t melt particularly well but can be used anywhere you’d want a hard Parmesan or Romano.

Toss some peeled shrimp into the skillet when you’re crisping the capers and finish the pasta dish with a little freshly grated lemon zest along with the cheese or omit the cheese entirely if you prefer.

For an even quicker weeknight pasta dinner, cook the zucchini with the pasta rather than in the skillet. Just add the slices to the boiling water about 4 minutes before the linguine is due to be done.