You CAN watch it live on NBC and USA or taped later on Peacock. I’m trying to confirm if it will stream live on YouTube or Peacock premium. Since it’s a long-ish event compared to most others, I’m not sure there will be uninterrupted coverage.

You CAN’T watch it in person – spectators along the course have been banned by officials due to Covid19 safety.

Note: The time zone on the schedule below is Eastern time. I’ve been lucky enough to meet a lot of amazing pro marathon runners, including Deena Kastor and Meb Keflezighi. Kastor won the  bronze medal in the women’s marathon at the 2004 Olympics in Athens, Greece. Keflezighi won the silver medal in the men’s marathon at the 2005 Olympics in Athens, Greece. And they’re both highly decorated athletes beyond this (it’s just that the Olympics is the topic for today)!!

I’ve also read both of their books and want to share some of my favorite parts from each. These aren’t your usual running books – I recommend both of them. I listened to each on Audible and think they’re a great listen while running!

Deena Kastor’s book is Let Your Mind Run : A Memoir of Thinking My Way to Victory

Meb Keflezighi’s book is 26 Marathons: What I Learned About Faith, Identity, Running, and Life from My Marathon Career

Yes, Kastor and Keflezighi are amazingly talented runners, but they’re also hard working and persevered through hard times. They’ve both had to overcome injuries in the prime of their athletic careers. That takes heart, tenacity and a positive attitude.

Deena Kastor broke her foot during the 2008 Olympics in Beijing, China and had to step out of the race.

Meb Keflezighi broke his hip during the 2008 Olympic Trials. And tragedy struck during the race, his close friend Ryan Shay had a heart attack and passed away.

And remember THIS IS THEIR JOB. Running is something they LOVE and it’s how they pay their bills. Which must make it sooooo much harder to stay positive in the face of adversity.

So even though you may not be an Olympian or Boston-qualifier or even a marathon runner – you can probably relate if you’ve ever struggled to overcome an injury or chase down a goal.

Success is determined by how you deal with set-backs.

Some of my favorite inspiring quotes from these books are… 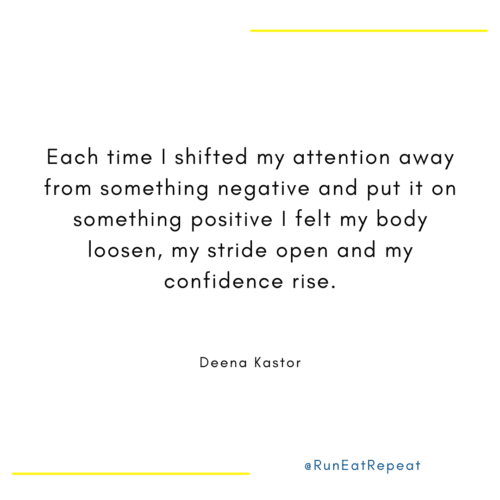 “Only after experimenting with positive thoughts as a professional did I realize how the nature of my thinking influenced the quality of my running. Each time I shifted my attention away from something negative and put it on something positive I felt my body loosen, my stride open and my confidence rise.” – Deena Kastor, Let Your Mind Run

“Every aspect of a run, from the pain it produced to the weather conditions, offered me a choice: Is this a thought that will slow me down? Or can I find a perspective that will speed me up?” – Deena Kastor

“Find a thought that serves you better.” – Deena Kastor 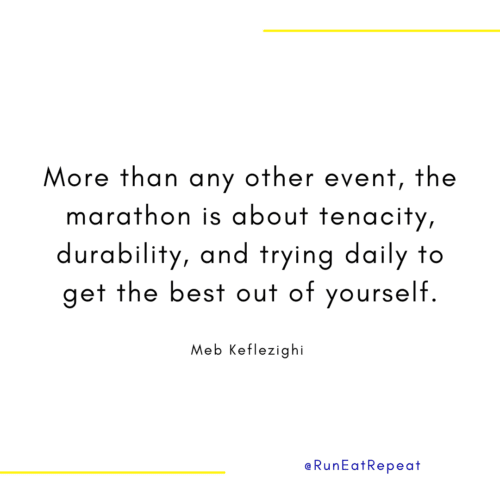 “More than any other event, the marathon is about tenacity, durability, and trying daily to get the best out of yourself.” – Meb Keflezighi, 26 Marathons

“Long-distance running is not the sport for people who crave instant gratification.” – Meb Keflezighi

“You don’t have to swing for the fences in everything you do. Cruise control can be an effective, low-stress way not only to run your fastest but to reach your full potential in many areas of life.” – Meb Keflezighi, 26 Marathons 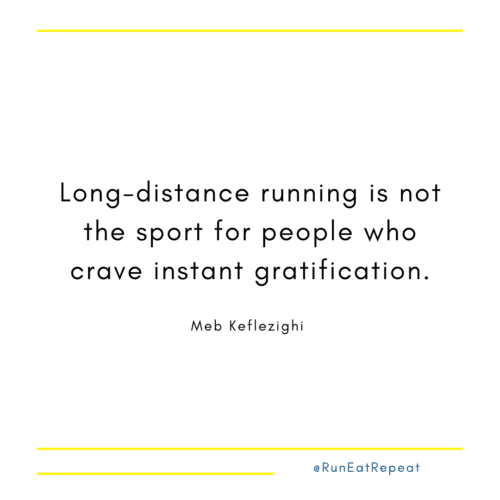 The moral of this story (I mean, blog post) is – Running a Marathon is HARD.

Do the work. Give yourself credit for every tiny victory. Stay positive.